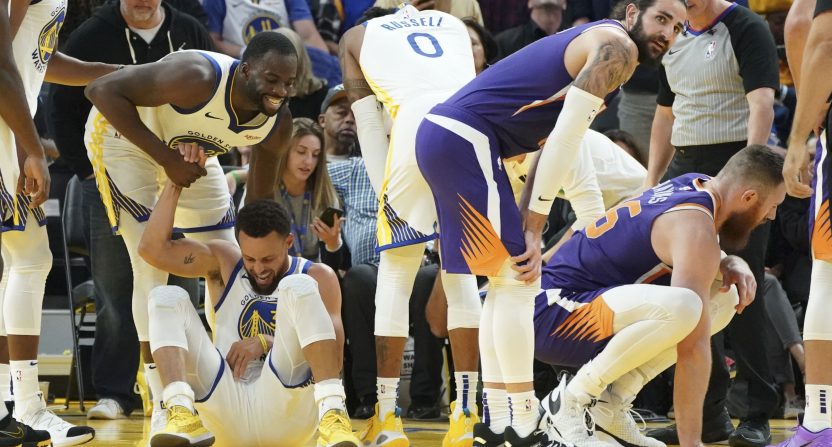 It’s safe to say the Golden State Warriors are out of the playoff race. They won’t have Stephen Curry back until at least February 1, and until then they will be the Zombie Warriors, with D’Angelo Russell and Draymond Green toiling by themselves. On Saturday, Russell and Green were out against the Hornets. Steve Kerr had nine players at his disposal and the Warriors lost 93-87.

Welcome to the one-year tank, Warriors fans. The early elimination of Golden State opens a very significant door in the Western Conference. For the teams on the fringes, a playoff spot is now way more realistic. The race at the bottom of the conference is a bit more wide open, and the margin of error for teams in the middle of the pack (e.g., the Trail Blazers) has just increased.

It’s early but we can probably pencil six teams into the playoffs out West right now: the Lakers, Clippers, Jazz, Nuggets, Blazers, and Rockets. That means three spots are up for grabs. As many as seven teams could make a run at one of those spots. Young squads have a chance to accelerate their timeline, and teams with hot starts like the Timberwolves and Spurs face an easier road to late April basketball.

The Mavericks, 4-2 with a quality win over the Nuggets and an epic OT battle with the Lakers, are the most enticing candidates to finish comfortably in the playoffs. Luka Doncic already looks like an All-NBA candidate, averaging more points (26.7) and assists (9.5!) than last year and shooting better from three (up to 35 percent from 32 last year).

When Doncic is the ball-handler in pick-and-rolls, the Mavs score 0.96 points per possession, 13th among high-volume ball-handlers. He will probably end the season averaging close to a triple-double.

Rick Carlisle remains one of the league’s best coaches. Dallas’s shot profile is favorable; they are third in three-point frequency, behind only the Rockets and Bucks, and Kristaps Porzingis is a legitimate threat from long-range. Their depth remains slightly worrying, but the squadron of guards orbiting around Doncic (Delon Wright, Dwight Powell, Jalen Brunson, Seth Curry) has been fun to watch.

Sixth place is a reasonable goal, given the Rockets’ early-season struggles. If Houston takes a while to figure out how to play defense, the Mavs look like the best candidates to usurp them in the Western Conference hierarchy.

San Antonio will be firmly in the mix after a 4-2 start. They have two stars and a host of interesting guards, assuring that the Spurs will keep being the Spurs. They lost tons of midrange shots and dominate bench minutes. Dejounte Murray, back from an ACL injury, has played well. Bryn Forbes is third on the team in minutes. Patty Mills is shooting 45 percent from three on 31 attempts, which is a good sign, even if that number will decline.

LaMarcus Aldridge is attempting 1.7 three’s per game, up from 0.5 last year, and he is three for 10. It’s not a lot, but Aldridge turning his long two’s into three’s would be a good sign for the Spurs. They need their starter minutes to improve; they are too often losing the minutes with Aldridge and Demar DeRozan on the floor and then having to compensate in reserve minutes.

This is San Antonio without DeRozan on the floor with Aldridge on vs. Aldridge off, and the Spurs without Aldridge with DeRozan on vs. DeRozan also off.

This is a small sample…. that reflect the same sample we saw throughout most of last year. pic.twitter.com/BULFz0Nrcp

It is amazing how good their bench has been this season. In 48 total minutes with the foursome of Rudy Gay, Marco Belinelli, Patty Mills, and Jakob Poetl on the floor, the Spurs are +33. Everything is obviously a small sample size this early in the season, but that is a huge gap.

The young Suns might insert their name into this discussion. They’re 4-2, and while they’ll be without DeAndre Ayton for 19 more games, they have looked very good. Their two losses were both by one to elite teams (Utah and Denver), and they have an impressive win over the Clippers sans Ayton. Devin Booker is averaging 23.8 points per game, and his red hot from three. Kelly Oubre is up to 18 points per game.

Monty Williams has done an impressive job. Phoenix looks competent on the defensive end, and they are moving the ball offensively — they’ve assisted 68.8 percent of their field goals, leading the league. Young guard Jevon Carter, acquired from Memphis in the Josh Jackson trade, has been a diamond in the rough. Carter is a menace on defense.

It might be far-fetched to think the Suns are playoff contenders in this conference. FiveThirtyEight has their projected record at 39-43, and their chances of making the postseason at just 26 percent. Hopes are higher now than they were at the beginning of the year, at least. Don’t rule them out!

The Timberwolves are better bets, surprisingly enough. FiveThirtyEight has their playoff chances at 75 percent, up from around 48 percent at the start of the season. Karl-Anthony Towns, when he’s not jousting with Joel Embiid, is stating a case as one of the league’s most underrated superstars. He and the Wolves are up to 4-1 on the season, with Towns unleashing shots from deep and playing more from the perimeter. Surrounding players see more open shots and accessible driving lanes thanks to KAT’s gravity.

They could still use a point guard (D’Angelo Russell speculation will only increase), but their auxiliary talent is better than expected. Andrew Wiggins is still scoring points, though his shooting (47.2 effective field goal percentage) remains unideal. Robert Covington is a nice player to have around.

Josh Okogie is a good time. His defensive rating is an impressive 88.1 in five games. Okogie’s length and quickness envelop perimeter wings, and he covers gaps quickly. On offense, he drives with ferocity when he sees a sliver of space.

The race for the three free spots will likely come down to the Mavs, Spurs, and T-Wolves, unless the Suns keep surprising. The trio of the Thunder, Kings, and Pelicans face an uphill climb, given their rocky starts. New Orleans could make a run when Zion Williamson comes back. Sacramento are clearly missing Marvin Bagley III, and they have to find a way to get back to what they were doing last year. OKC are longshots, though Shai Gilgeous-Alexander has played well.

It could be really interesting to see the Doncic Mavs challenge one of the LA teams in the first round of the playoffs. The lower-tier West teams can thank the Warriors for the opportunity.