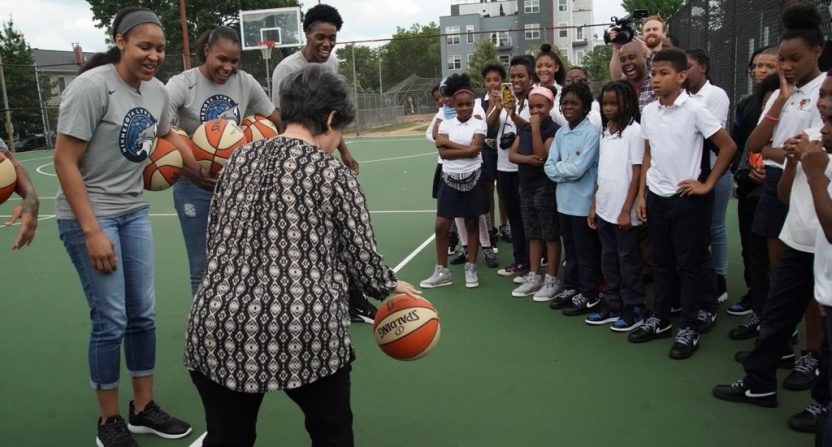 Unlike most previous WNBA champions, this year’s Minnesota Lynx were not invited to visit with the president at the White House. But that did not stop the team from arriving in Washington D.C. the day before their game against the Mystics to engage with the community.

The Lynx spent the day Wednesday not only meeting with Minnesota congresspeople but also giving out socks and shoes at a local elementary school.

Congratulations to @WNBA Champions, the @minnesotalynx! You can always celebrate with DCPS. Our @PayneDCPS students loved their new shoes, and the opportunity to meet “real champions,” members of Congress, and all the community leaders who joined us today! pic.twitter.com/3wFm7KGwVv

According to the Star Tribune, the Lynx passed up what would have been a day off.

“We want to serve,” Lynx coach Cheryl Reeve said. “We want to give back, show that this is what champions do.”

“We didn’t want to make it about us,” center Sylvia Fowles said. “So we came up with the idea of, ‘Why don’t we just give back?’ We reached out to Coach, and told her what we were thinking.”

The Lynx won the WNBA title in 2017 for the third time in six years. After both of their previous championships they were invited to the White House by President Obama. This time, with Donald Trump in office, the invite never arrived.

The Star Tribune reports that the Lynx seemed hesitant to make their lack of White House invitation into a big deal, but several prominent NBA figures stood up for the team. First, LeBron James called the situation “laughable.”

LeBron on the Minnesota Lynx not being invited to the White House after their WNBA championship: "It's laughable at this point." pic.twitter.com/PcnxLS7476

No White House invite for the WNBA champion Minnesota Lynx?

Steve Kerr sounds off: “The president is turning all this into a political game.” pic.twitter.com/XsznNByj0i

All of this, of course, comes days after Trump uninvited the Super Bowl-champion Philadelphia Eagles from the White House when the team said it planned to send only a small delegation.

Ultimately, the Lynx seemed to have a pretty nice day in D.C. on Wednesday, White House invite or not.

The WNBA champions @minnesotalynx may not have been invited to the White House but they showed what true champions are by serving DC kids today. Good to be with them there & on the team bus! pic.twitter.com/FJrZHUpATR