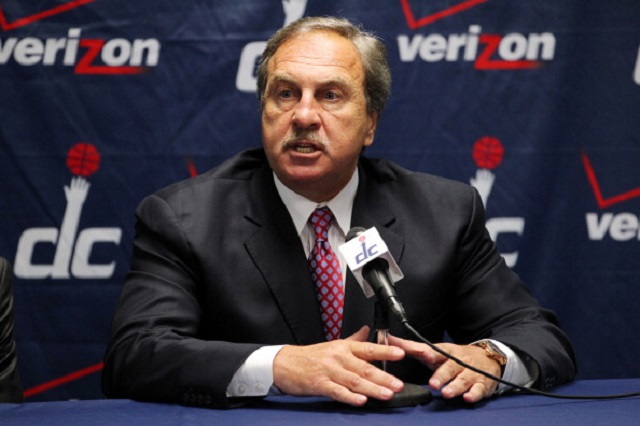 To little surprise, the Washington Wizards fired head coach Randy Wittman on Thursday. The Wizards were arguably the most disappointing team in the NBA this season, projected as a possible Eastern Conference Finals contender. Yet the team failed to make the playoffs, finishing with a 41-41 record and 10th in the conference.

Wizards owner Ted Leonsis posted a tweet after the decision was announced, which included a link to a note thanking Wittman.

“We all are appreciative of the effort and contributions of Randy Wittman,” the note began. “He took over the Wizards coaching reigns at a difficult time and immediately earned the respect of our players.”

However, Wizards fans felt Leonsis didn’t go far enough by dismissing Wittman. Many felt general manager Ernie Grunfeld should also have been fired, and let the owner know about it in immediate response to his tweet. Here are a few examples:

@TedLeonsis can you do the same to Ernie now

@TedLeonsis questioning keeping my season tickets if Ernie is not in the same position.

@TedLeonsis please get rid of Grunfeld too. He deserves to be in prison for the horrible trades he’s made.

@TedLeonsis why in God’s name are u keeping Erine? Don’t you listen to fans or radio shows? Wizards are becoming a laughing stock. #Wizards

There are many, many more in a thread that you could probably spend the rest of the afternoon scrolling through. But the sentiment is rather clear. Wittman may not have done a great job coaching the team, going 178-199 in his four-plus seasons. Last season, the Wizards had a 46-36 record and advanced to the second round of the NBA playoffs.

But the man responsible for providing him with that roster, for declining to sign any players to long-term extensions or free agents to long-term contracts, in the blatant hope of keeping salary cap space open for a run at Kevin Durant during the offseason, should also be held accountable. (Grunfeld is expected to pursue former Oklahoma City Thunder coach Scott Brooks, hoping it will help woo Durant.)

Grunfeld has been the Wizards’ GM for 13 seasons and is under contract for next season. The team has compiled a 444-606 record during his tenure in the front office, and has never had a club finish with more than 46 wins in a sesason.