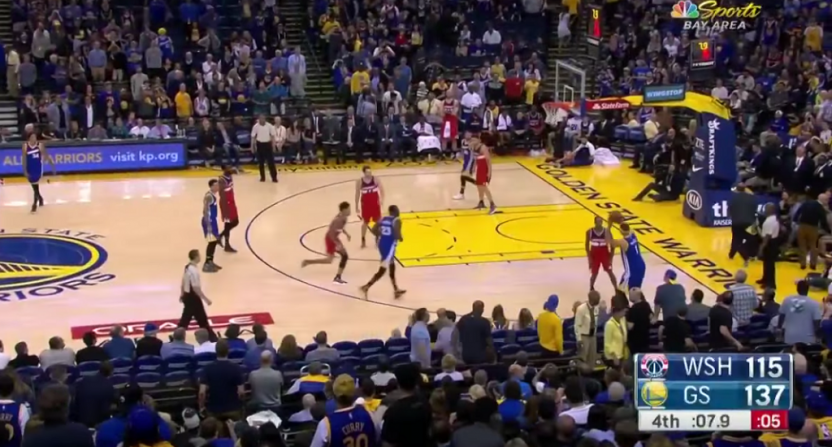 The Golden State Warriors were up 137-115 during Sunday night’s game against the Washington Wizards, when Warriors big man JaVale McGee shot a three-pointer with under 10 seconds left in the game.

However, it’s very important to note that the shot clock was running down, and McGee may have just had that in mind rather than trying to show up the Wizards in a blowout.

But the Wizards most certainly didn’t take it that way, and Washington point guard Brandon Jennings shoved McGee during the shot in disapproval. Jennings was given a flagrant-1 foul after officials reviewed the play.

Here’s video of the scene:

Jennings continued to show anger about the shot after the game (quotes via CSN Bay Area):

“It’s just a rule; I learned it when I first came into the league not to do that,” Jennings said. “You’re already up 20 almost (actually 22), and then for him to do it, it was like, ‘All right, come on. Chill out. Now you’re trying to embarrass us.’ ”

“Thank God he didn’t go to the rack,” said Jennings, who after fouling McGee walked away with an expression of disgust. “It probably would have been worse for him. At a time like that I think you should just let the clock run out.”

“I think it was already disrespectful that they were trying to get Draymond Green his triple-double and Steph was out there with 40,” Jennings said. “I just felt it was disrespectful.

“I’m old school. Like I said, he better be glad he shot that 3 and didn’t go to the rack.”

“Whenever a team’s up like that, you’re supposed to just hold and ball and take a shot clock violation,” Wall said. “What Brandon did, I don’t think it was dirty. I think it was the right play. You don’t let nobody try to embarrass you. I think that’s what they were trying to do.”

“What’s JaVale supposed to do? Let the clock run out and get a turnover?” wondered Klay Thompson after a 139-115 victory Sunday night. “It’s basketball.”

“We had to shoot a shot or take a turnover,” Draymond Green said. “We always shoot the ball in that situation. We don’t really take turnovers. Whether you shoot a 2 or a 3, it’s a shot.

However, Warriors coach Steve Kerr apologized to Wizards coach Scott Brooks, and said that, while he doesn’t have a problem with McGee taking a shot with the shot clock running down, he doesn’t think you should shoot a three-pointer:

“When you have a lead like that, you shouldn’t be shooting a 3-pointer,” he said. “I told (McGee) that. I think he understands that. I don’t have a problem taking a shot when there is a shot-clock differential. I never understood why a team would be offended if there is a shot-clock differential. Why dribble out the clock and take a turnover? I don’t think you should shoot a 3 either.”

It’s easy to see both sides of this whole thing, but I have to take the Warriors’ side on this one.

And I agree with Kerr that taking a three there isn’t the best way to go about it, but then Jennings is saying how McGee is lucky that he “didn’t go to the rack” as though that would be even more disrespectful? So where’s the line? Is McGee only allowed to shoot two-point shots from 11 feet out or something? If he dribbles the shot clock out, isn’t that even worse for the integrity of the game? And if you think dribbling the shot clock out is the more respectful way to go, when does that start? Is it an under-15 seconds left situation only?

Unwritten rules can really be awful.