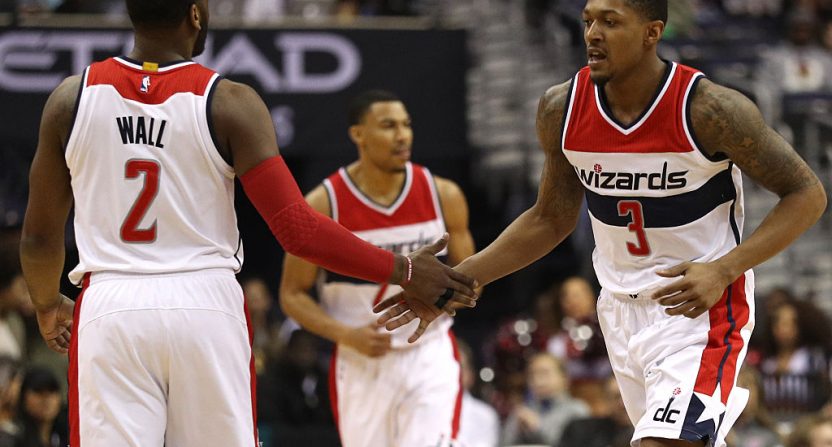 Over the last two Mondays, we’ve seen how good the Washington Wizards can truly be.

After losing to Cleveland just over a week ago, 140-135, in an overtime classic that TNT’s Kevin Harlan deemed maybe the best regular season game he ever saw — if you haven’t seen LeBron’s buzzer-beating bank shot to force overtime, you must — Washington blew out Oklahoma City 120-98 on Monday in what could be its signature win of the season.

As other powers in the Eastern Conference went through midseason swoons, the Wizards have been the best team in the conference since the beginning of December. Cleveland went .500 in January and will now be without All-Star Kevin Love for six weeks, Toronto has really struggled of late — though the Raptors just acquired Serge Ibaka from Orlando — and even Boston can’t quite keep up with Washington’s stellar play.

Though Washington is in great shape right now, it wasn’t always smooth sailing for the Wizards this season in Scott Brooks’ first year as head coach. They started 2-8 and 6-12, leaving critics wondering if the team had fixed the defensive issues that plagued Washington last season under Randy Wittman, who was mercifully fired.

Not surprisingly, it took a while for John Wall to get healthy after getting surgery on both of his knees last May, and other players were either slow to return to the floor in October in November or were on minutes restrictions.

Washington is now in the top 10 in both points per game and points per 100 possessions thanks to newfound balance on that end, with all five starters averaging double figures in scoring.

“Brad and John, they can get a shot off just about any time,” Brooks said. “But to make a team work, you need all guys involved and all guys have to participate.”

Not only is Wall averaging career highs in points and field goal percentage — while leading the league in steals — backcourt mate Bradley Beal and forward Otto Porter are putting up career years as well.

“On offense, we don’t care who shoots the ball,” Beal told The Comeback.

Brooks has given Beal and Porter the green light from the 3-point mark. After attempting just under five treys per game last season, Beal is up to 7.2 triple tries this season and is hitting them at a higher rate. And Porter’s 45.9 shooting percentage from three leads the NBA, as he’s finally coming into his own at age 23.

“Going into the season, I didn’t understand how good of a shooter he was,” Brooks said. “He’s a knockdown shooter. When he misses, you’re surprised.”

Porter has also helped lead the charge defensively, along with Wall and veteran big man Marcin Gortat. The Wizards are up to 12th in defensive efficiency this season, and at one point defended so well on Monday that Oklahoma City missed 24 consecutive field goal attempts.

“It’s something that we got away from,” Wall told The Comeback, regarding playing strong team defense.

But now, Beal said, the team’s defensive approach is becoming one of Washington’s strengths.

“In recent games, we’ve had the approach that we’re gonna be physical, we’re gonna hit you first and we’re gonna get out and run,” Beal said.

The approach is forcing opponents to make some costly mistakes. Washington is forcing turnovers on 14 percent of opponents’ possessions, which is second in the league according to Basketball-Reference. It’s 5th in the NBA with 15.6 turnovers forced per game.

Oubre said the team’s length and active hands are forcing more back-taps and steals. Washington is currently eighth in the league in steals per game.

“That’s something we’ve been talking about from training camp,” Brooks said. “We have to be able to be known as a team that’s gonna be able to compete with our defense and give ourselves a chance to win every night with our defense.”

Washington’s vaulted to the lead in the Southeast Division and the third seed in the East, but still has plenty of work to do to be considered a contender in the conference. Of the nine NBA teams that are at least 10 games over .500, the Wizards are the only one without a winning road record.

But an improvement on both sides of the ball from several Wizards has this team finally playing up to its potential. And it’s the team’s strong balance the team lacked a season ago leading the way.