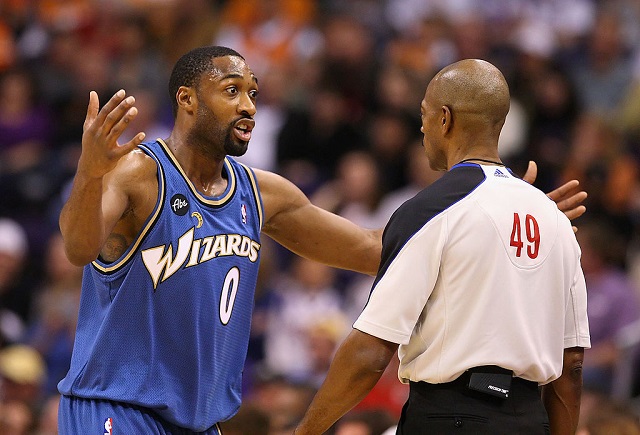 The WNBA did not pull its punches in addressing Gilbert Arenas’ comments about the league, calling the former NBA guard’s words “repugnant, utterly disrespectful and flat-out wrong.”

On Tuesday, Arenas posted to Instagram a video of women in their underwear playing basketball (truly no reason to link or embed it here) with the following caption:

NOW this is what america was hoping for when they announced the #WNBA back in 1996… not a bunch of chicks running around looking like,cast members from #orangeisthenewblack…dont get me wrong,they have few #cutiepies but theres a whole alotta #beanpies running around hahahahahaha if #skylardiggins came out like this,I dont care if she missed every layup..imma buy season tickets and I dont even know where the fuck #tulsa is hahahaha #2016newwnbaoutfitPLS and if u think this is sexist,9 times out of 10 u the ugly one and we didnt pay to come see u play anyway #donkeykong…smdh #thiswillbeawesome#soldouteverywhere

People keep sending me this Gilbert arenas post, but I don't care! He obviously needs a hug& attention so y'all give it to him!

To all my smart, beautiful young female ballers… No one ever asked NBA guys to hoop in a speedo so laugh at haters& Dab on dem folk

Sorry loves but we are at war trying to save our young girls from a lot of social media shaming & I am not here for it! Gotta run be great

What I just read from Gilbert Arenas is absolutely disgusting & I'm ashamed that ppl are agreeing and laughing at it! #growup #hemakesmesick

That clearly wants y'all attention. So y'all please entertain that BeanPie looking dude. He's not even worth our time

Lost all respect for Gilbert…..smh.

Hey Gilbert, instead of worrying about who we sleep with, what we wear, and our appearance ask yourself why you can't get a job!

@SwishAppeal @NBA @WNBA you should put former in all caps to emphasize his irrelevance.

As Sports Illustrated points out, this is not the first time Arenas has posted something deeply misogynistic on Instagram. In fact, he was at it again today, expressing shock at the outrage over his original post and doubling down on its distasteful message.

Ppl act like I said some shit thats just down right sexist and rude…..str8 men are attracted to women RIGHT? Men are 80 percent of sportviewers RIGHT? So lets name a few women sports,that still attract the men viewers…#Tennis,omg they were short skirts like female..#trackandfield,short tights and crop tops,so we can see abs “we get ass prints and stomachs,in that sport YAY”#volleyball,short tights and booties hanging out the back off their shorts “FUCK wheres my beer” #beachvollyball,fyckn swimsuits,jumping up and down WOW..#arenafootball theres nothing attractive about a women playing #FOOTBALL until they came out with the gear (no they didnt)”girls running each other over with 90 percent of their clothes removed..whos the mastermind behind this #sexist sport he or she needs a fucking statue..#UFC the manliest sport by far but they seem to attract men viewers by the million OMG it must be the tights and the crop tops and just maybeeeee a fighter gets hit so hard her sports bra falls off hahaha….ALL ABOVE SPORTS seems to understand the concept…..#Basketball has the lowest views by men BECUZ their mimicking MEN #Basketballchicks has some of the best bodies in women sports #Lesbians or #str8 we can give two shits about what they prefer in the bedroom becuz men prefer #assandtitties and last time I checked theres 20 total titties and 10 asses running around but for some odd reason were not getting it..what were getting is #tats #dreads #highsocks #baggyshorts #elbowpads..sounds like MEN attire to me..this sport will continue to be less viewed and under paid compared to other female sports #presidentLAURELRICHIE theres a reason 7 out of the top 10 highest paid women athletes come from tennis #Skirts and #ass…..if the #NBA got rid of the thug imagine for global viewing SHOULDNT you?? I dont care if u dont like the truth becuz MEN DON’T WANNA WATCH WOMEN ACT LIKE MEN..if they came out with an all #gay man sport..I bet they will wear less clothes then the #WNBA and thats a #FACT lol NOW GIVE US WHAT WE WANT and unveil them bodies…SEXINESS RUNS THIS WORLD…if ur selling sex,MEN are buying…ive never seen a man hooker trying to pick up women on the corner

The fact that Arenas cannot see the problem with expecting female athletes to sell sex while male athletes sell athletic ability suggests he has a problem with not only misogyny but also intellect. We’ll go out on a limb and say it’s probably unlikely we’ll see Arenas back on a NBA roster ever again although given his checkered past we probably haven’t heard the last of Gilbert in the news.