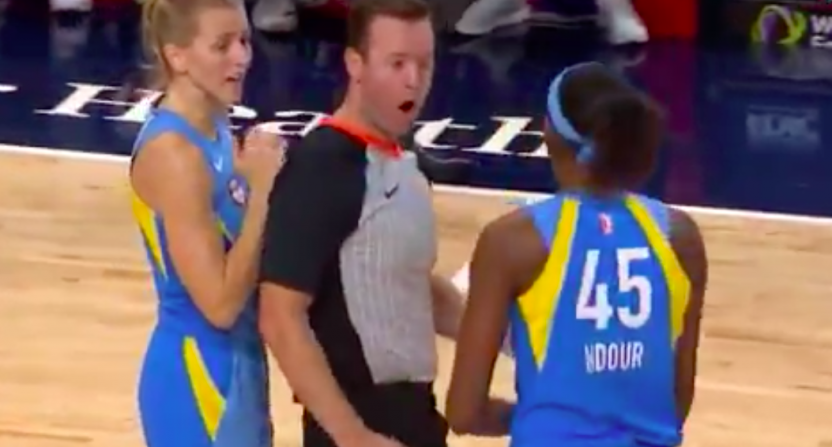 You can’t make contact with a referee during the game. It’s one of the cornerstones of the rulebook. But what happens when the referee is the one making contact with you? Is it still your fault?

Apparently so in the WNBA.

Sunday, the Washington Mystics welcomes the Chicago Sky to town for the final game of the regular season. The Mystics had already wrapped up the No. 1 seed for the WNBA playoffs, making this one a formality for them. However, the game still had stakes for the Sky, who could avoid two single-elimination playoff games with a win (and a little help). So emotions were still bound to be high. Perhaps that’s how we got so quickly to the point where things went off the rails, leading to one of the strangest player-referee incidents in recent memory.

The Mystics took a solid lead late into the second quarter when a technical foul was called on the Sky’s Cheyenne Parker from the bench. Her teammate, Astou Ndour, was attempting to get official Kevin Fahy’s attention to explain something to him. As she was gesturing to her right arm, the ref, who was looking elsewhere, walked into her hand. And at that point, you might have thought Ndour’s skin was made of razor blades based on the way he reacted.

Here's the video replay of the Astou Ndour ejection: pic.twitter.com/MipIgQdfSM

Technically, contact is contact. And you can certainly make the case that Ndour could have moved as the ref got closer. And sure, it might have caught Fahy off-guard in the moment. But clearly the contact was minimal and not malicious. Certainly, this exists in a grey area that doesn’t call for THAT kind of reaction.

This is one of the bigger referee overreactions I’ve ever seen. https://t.co/xYO8PuQ3WD

The look of sheer horror on his face at being touched had Twitter wondering if they’d just witnessed their first referee flop. And you better believe that this meme is just getting started…