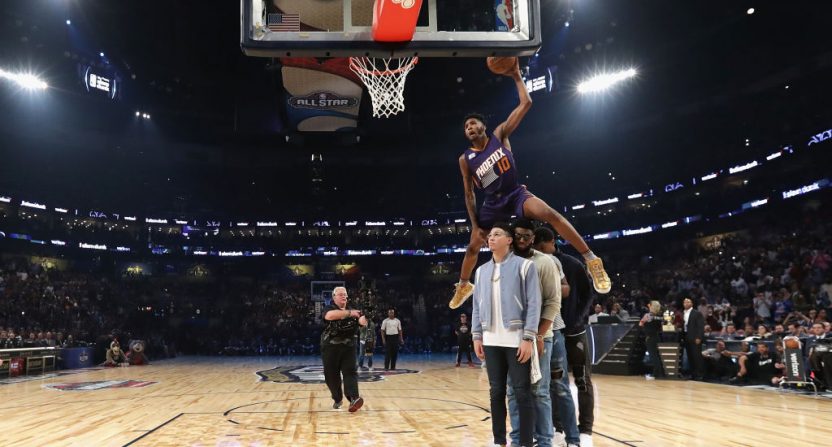 Zach LaVine and Aaron Gordon spoiled the crowd in Toronto last season in one of the most spellbinding and captivating Slam Dunk Contests ever. LaVine and Gordon one-upped each other with highlight after highlight. After all was said and done, both dunkers deserved the trophy. On Saturday night in New Orleans, we got dabbing and drones – and worst of all, nobody really deserved the trophy.

The Slam Dunk Contest can’t be forgettable. Excitement makes the contest. Besides a handful of Derrick Jones Jr. dunks, there was nothing memorable in New Orleans. More dunks were missed than made. It was like watching a practice. There was no jump and little energy. Indiana Pacers guard Glenn Robinson III won because his competitor, Jones Jr., couldn’t finish a dunk to save his life in the finale. The crowd was dead with multiple dunks remaining.

The Slam Dunk Contest is the crown jewel of All-Star Weekend. It’s the event that generates the most eyes, the most highlights and has the longest shelf life. People still talk about the best moments from past contests. Nobody will be talking about this dunk contest a week from now. It was that pathetic.

And that's a wrap!

Jones Jr. vs Robinson III had viewers longing for the days of past dunk contest moments, such as “It’s Over” from Vince Carter in the 2000 All-Star game which still excites me.

MJ vs Dominique Wilkins? An all-timer.

Zach LaVine vs Aaron Gordon? It’s hard to believe that’s from just a year ago.

Lets be real, there wasn’t a single dunk tonight (maybe this Jones Jr. dunk) that could hang with any of the legends above.

Robinson III performed some nice dunks. Jumping over Paul George, Boomer the Panther and a Pacers dancer and throwing down the reverse is an impressive display of athleticism. But, that’s a good first round dunk in any other year. A finals decider? psh….

An excellent point was made on TNT as well. There wasn’t enough star power in the event. Derrick Jones Jr. almost equaled his point total in the entire season with his finished dunk. Robinson III is certainly a rotation player in the NBA, but he’s no star. DeAndre Jordan was the biggest name, but he’s not even the second best player on his team. Bringing Aaron Gordon back was a wise decision, but battling a foot injury ultimately kept him from flying and killed his chances.

Drop a truckload of money and get stars like LeBron James, Giannis Antetokounmpo, Andrew Wiggins, Russell Westbrook and former winners Terrence Ross, Blake Griffin and LaVine to participate. Hell, even get former faded winners like Vince Carter or Gerald Green to come dunk. No more of this “is he a D-Leaguer?” nonsense. No disrespect to the folks who participated, but the lackluster showing proves the top players need to play.

Robinson III told the crowd after the contest to “not sleep on him.” To that I say, I did my best. But if you don’t want us to fall asleep, give us something worth staying up for.

1 thought on “Admit it, you already forgot this year’s boring ass miss-fest of a Slam Dunk Contest”