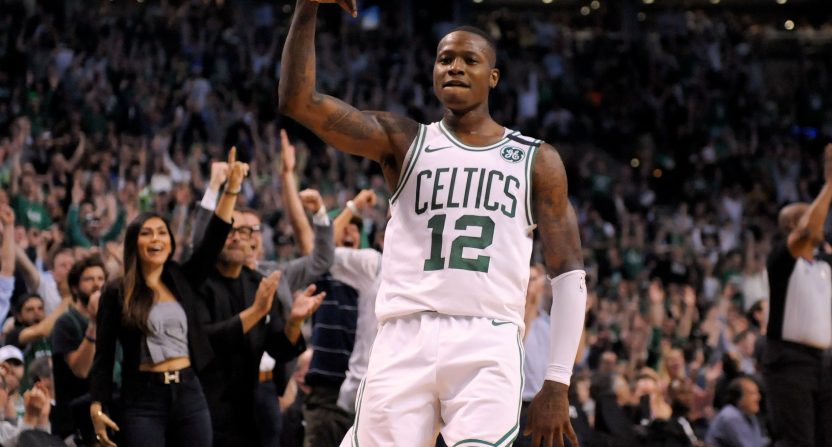 The Boston Celtics continue to be doubted after losing stars Gordon Hayward and Kyrie Irving to season-ending injuries. And all they do is keep winning.

Boston put together a remarkable team performance to take down the Cleveland Cavaliers 107-94 in Game 2 on Tuesday night, and take a commanding 2-0 lead in the Eastern Conference Finals.

The Celtics took a balanced approach, having a different leading scorer in all 4 quarters of the game pic.twitter.com/PcHsL0yJ4A

And another clear difference between these teams: effort. Cleveland’s defensive effort was putrid on so many possessions, like this one in the final two minutes:

As the following graphic from ESPN Stats & Info shows, the Cavs took only three open shots in the second half… compared to 20 open shots for the Celtics! So much of this is simply *effort*, something we see night in and night out from the Brad Stevens-coached Boston squad.

In the 2nd half, the Cavaliers took only 3 open shots, compared to the Celtics 20 pic.twitter.com/XHnvs5h7dG

The series now heads to Cleveland, and maybe the home crowd will help boost the Cavs’ efforts. But the trends through two games are troubling for Cleveland, and we know their performance has been so inconsistent all season (and they were frankly outplayed in their seven-game, first-round series against the Indiana Pacers).

LeBron James had a triple-double in the game with 42 points on a highly efficient 16-of-29 shooting from the field, and the Cavs still lost by 13 points. That he can do that well and they’re still getting pummeled is quite concerning for Cleveland.

The depth and grinding effort from the superbly-coached Celtics is just going to be so difficult for this Cavs team to beat four times in five games (if necessary).

Now, as always, you can never count out LeBron. Just about everyone did when he led the Cavs to a stunning NBA title two years ago against the Golden State Warriors. But this Cavs team is just so flawed, inconsistent, frequently lazy on defense, and it’s hard for LeBron to do much more than he did in Game 2.

It goes without saying that Games 3 and 4 are essentially must-wins for Cleveland. Game 3 tips off at 8:30 PM ET on Saturday night at Quicken Loans Arena.