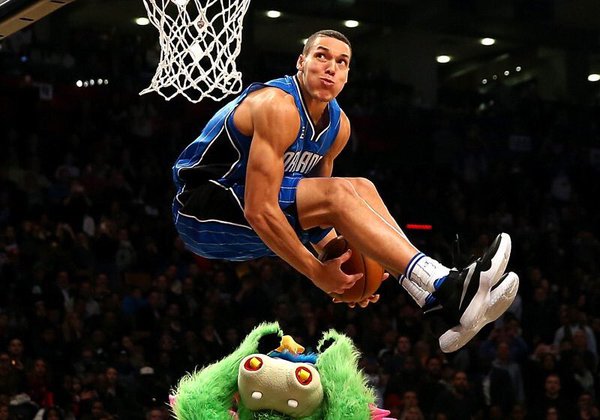 Aaron Gordon and Zach LaVine put on an incredible show Saturday night at the NBA slam dunk contest in Toronto. The two men battled to a virtual draw in a breathtaking back-and-forth marked by perfect scores and soaring, creative dunks.

LaVine won, but Gordon had probably the best dunk of the night and would’ve won just about any other dunk contest ever.

After unspectacular dunks from Gordon, Will Barton and Andre Drummond, LaVine woke up the crowd with this:

LaVine got a perfect 50 score for that effort and another perfecto for this unprecedented free-throw-line alley-oop.

Last year was solely LaVine’s dunk contest. This year, just when it seemed he’d dominate the field once again, a competitor burst into the forefront to challenge him.

Gordon powered into the final with this pretty and impressive throwdown, utilizing the Orlando Magic’s mascot:

In the final, Gordon brought the mascot back and showed off his coordination and timing with this perfect-50 dunk, which included him grabbing his head as he threw it down:

Not to be outdone, LaVine put down a windmill from the free-throw line, which was fairly mind-boggling. This, of course, scored 50 points.

Then came the dunk of the night. Gordon grabbed the ball off his mascot’s head and stuck it under BOTH legs, basically dunking from a sitting position. Naturally, this also earned him a 50, but if any dunk deserved bonus points, this was it.

LaVine’s response was underwhelming by comparison, but still pretty freaking sick in its own right.

Gordon didn’t really know what to do next, but pulled off a forceful dunk in which he went up to tomahawk then brought the ball down between his legs. That earned him a 48 out of 50, which would be cool in any other context but was a bit of a letdown here.

On his sixth dunk of the night, LaVine ended it.

Through the legs from just inside the free throw line, LaVine made the final resounding statement of the night. He was again the dunk-contest champion on All-Star Weekend.

Even though LaVine got the trophy, Gordon was a co-winner in everyone’s hearts. Really, we were all winners, because the show these two produced made for one of the best dunk contests of all time and an awesome capper to All-Star Saturday.