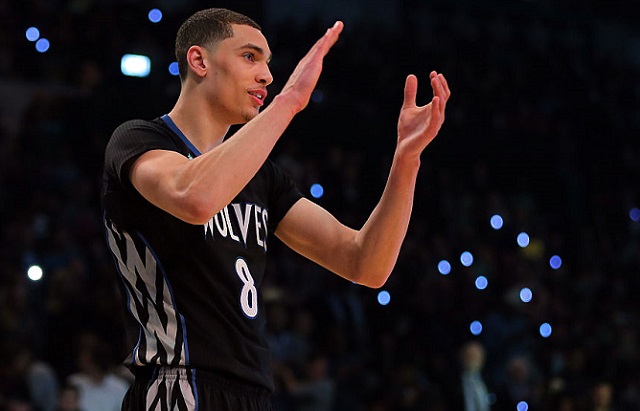 Every year in every sport, players who finally get an opportunity to be successful turn out unexpectedly fantastic seasons and begin to gain recognition as rising stars.

In the NBA last year, Portland guard C.J. McCollum got an increase in playing time, turned into a scoring machine and won the league’s Most Improved Player award. Denver’s Will Barton, who we spoke to in February, embraced his role as a do-it-all, energetic super-sub and finished fifth in the MIP voting. Evan Fournier of Orlando and Kent Bazemore of Atlanta parlayed their boost in minutes into gigantic contracts over the summer, leaving their respective teams no choice but to re-sign them.

This year, The Comeback will try to predict next season’s breakout players based on larger expected roles and opportunities. One rule: Rookies for this season are not eligible.

With one year left on incumbent point guard Jeff Teague’s contract, Hawks management had a decision to make: Risk losing him for nothing next summer, or trade him while his appealing cap number could fetch an asset in a trade. So after seven years in Atlanta, Teague was sent to Indiana in a three-team trade that brought in the 12th overall pick (which turned into Taurean Prince of Baylor). The starting role subsequently went to the promising German Dennis Schröder, who turns 23 on Thursday.

Schröder averaged 11 points and 4.4 assists per game last season in only 20.3 minutes per contest, and those numbers should balloon with starter’s minutes under head coach Mike Budenholzer. The problem is that he was relatively untested with bigger minutes, logging over 30 in a game just four times, though he performed well in that small sample size.

Despite backing up Teague, Schröder’s success was vital for Atlanta during its 48-win regular season. With The Menace in the lineup, the Hawks were 47-33 and fared much better when Schröder performed well.

When Schröder shoots the ball well and defends at the level he’s capable of, Atlanta was really good last year. He’ll have to develop good chemistry with the newly signed Dwight Howard— who replaces Al Horford in the lineup after his departure to Boston — and should be getting big minutes right away. If he can harness his strengths, there’s no question that Schröder will have a breakout campaign.

We all know what new Minnesota head coach Tom Thibodeau did to help Jimmy Butler’s career in Chicago, turning him into an elite NBA shooting guard. One of his chief tasks in year one will be helping LaVine develop his other-worldly athleticism into consistent two-way play in non-dunk contest situations.

LaVine’s statistical jump in his second season, after being a net-negative player as a rookie, has to make Wolves fans absolutely giddy.

LaVine turned into a deadly 3-point shooter, a scary skill when you combine that with his athleticism. That should, conceivably, open up more drives to the basket and trips to the line. LaVine dabbled at point guard last season when Ricky Rubio was on the bench, and it’ll be interesting to see if that trend continues now that Minnesota will have to incorporate Kris Dunn, a dynamic Providence point guard taken fifth overall in June’s draft, into the rotation.

If Thibs manages his players’ minutes the way he did with the Bulls, LaVine is going to get a whole lot (probably too much) of playing time this coming season, and his ascent along with that of Karl-Anthony Towns, Andrew Wiggins and the entire team is going to be special to watch.

Simmons is the perfect example of how the D-League system for the NBA is working, producing and cultivating late-developing talent.

After spending the 2014-2015 season with the Spurs’ D-League affiliate in Austin, he played with Brooklyn during the Orlando Summer League before heading to Las Vegas with the Spurs. He could have made a strong career for himself overseas, but Simmons was fantastic in Vegas and inked a contract to play a bench role with Gregg Popovich in San Antonio.

The 26-year-old only averaged 14.8 minutes per game in 55 contests with the big club last season, but the University of Houston product made the most of his time on the court. Simmons shot over 50 percent from the field, 38.3 percent from three and played strong enough defense during the regular season to get some playing time in a few playoff games.

With veterans Boris Diaw and Matt Bonner out of the picture, Simmons is likely to see an increased role as a “3 and D” player in Pop’s rotation and circle of trust. As the Spurs remain one of the league’s elite teams, you’re going to be hearing a lot more about Simmons over the coming months and years.

While basketball fans around the world were drooling and fawning over Kristaps Porzingis — and rightfully so — a number of advanced stats suggest that Jokic, who finished third behind Porzingis and Towns in the Rookie of the Year voting last season, had the better year.

Jokic, 20, was fantastic for the Nuggets last year. And while his hype will never be as large as Porzingis’, he has a chance to be an all-star at some point in his career. As he grows more comfortable with head coach Mike Malone and the NBA, Jokic should only continue to flourish after only attempting 7.5 field goals per game last season.

With Dwight Howard now in Atlanta, the 22-year-old Geneva native is the team’s only true center on the roster. Although he played in just 19.1 minutes per game last season, Capela made a strong impression by averaging 6.4 rebounds per game and shooting 58.2 percent from the field.

New Houston head coach Mike D’Antoni knows that the only way his Rockets are going to succeed is if they’re in the top 10, or at least the top half, statistically on both offense and defense, as he told NBA.com’s Ian Thomsen. Capela’s defensive rating, or points his team allows per 100 possessions while on the floor, was the best on the team last season. He’s definitely going to play a much larger role for the Rockets this season.

The only thing Capela isn’t very good at is free throw shooting, where he shot an embarrassing 37.9 percent last season on 211 attempts. For “Swiss Miss” to not become his new nickname, Capela has to really work on this aspect of his very promising game.

Mario Hezonja, Forward, Orlando Magic
It was a struggle offensively for the 21-year-old for most of the season, but he shot over 50 percent in an encouraging seven-game April stretch to end the season. Super Mario oozes potential.

Justise Winslow, Forward, Miami Heat
Expect an expanded role in year two for Winslow with Dwyane Wade gone. He was much better offensively after the All-Star break, but still has much work to do.

Frank Kaminsky, Forward, Charlotte Hornets
The Tank was really strong defensively in his rookie season and shot just under 39 percent from three during March and April. He’ll be a strong 3 and D, stretch four this season.

Alex Len, Center, Phoenix Suns
After averaging nine points and 7.6 rebounds in 23.3 minutes per game, the fifth overall pick in the 2013 draft should average a double-double if given more playing time. With Phoenix’s logjam of young players, that’s not a given.