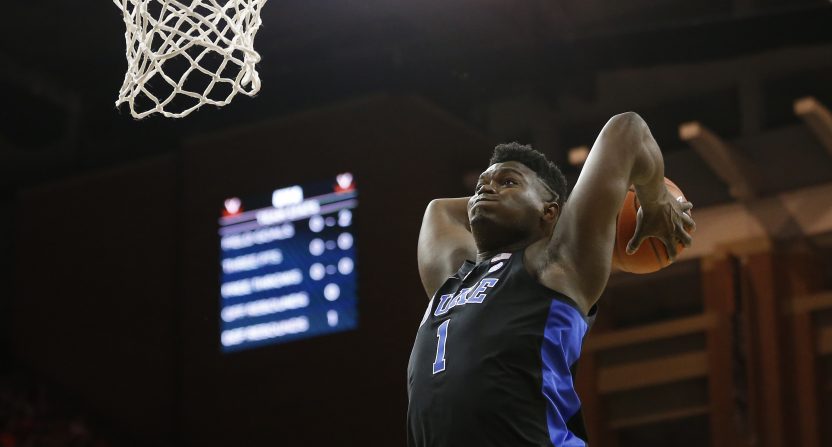 NBA players have been participating in the FIBA World Cup since 1994, but this year’s edition (held in China from August 31 – September 15) could have one of its biggest attractions be someone who hasn’t even yet played in the NBA. That would be Zion Williamson, who drew tons of media attention and ratings during his one college season with Duke, and who’s widely expected to go first overall in this month’s NBA draft. Marc Stein of The New York Times sent out several tweets Saturday about USA Basketball’s roster construction plans for this year’s tournament, but maybe the most notable was his mention that they’re still looking (as he previously noted in April) to see if Williamson is interested:

As @NYTSports reported in April, USA Basketball officials also have planned to gauge Zion Williamson's interest in filling one of the 12 roster spots as he inches closer to his NBA debut next fall. @ZionW32 will be selected No. 1 overall by New Orleans in the June 20 draft

Of course, that report doesn’t include any indication that Williamson is actually interested at this point in time. Still, if he winds up on this team, that could make this tournament more widely-covered and widely-followed in the U.S.; it’s a big deal for many of the other countries involved, but the U.S. has won the last two World Cups (in 2014, where they beat Serbia 129–92 in the gold medal game, and in 2010, where they beat Turkey 81-64 for gold) and is again heavily favored.

So that’s a bit of a drag on casual fans’ interest, and the 2010 tournament only saw 900,000 U.S. viewers watch the final. (2014 saw slightly better U.S. numbers, but still only 1 million and 1.3 million for the U.S.’ first two games, and the numbers didn’t improve dramatically after that.) But having Williamson involved could pique fans’ curiousity, as this might be one of the first looks they get at what he can do alongside NBA stars. And that could be very nice indeed for U.S. rightsholder ESPN.

Williamson could conceivably wind up at NBA Summer League in early July too, but that’s a tournament with less on the line, and one where many veterans and even some top rookies don’t always participate. And it’s possible that if he does join the U.S.  team for the FIBA World Cup, he and/or the Pelicans might decide that he shouldn’t attend Summer League as well; there’s a gap between the July 5-15 Summer League schedule and the start of the U.S. training camp in August, but there might be some concerns about load management on Williamson ahead of his rookie NBA season, especially considering that he already had one injury scare this year.

Even if Williamson does play in Summer League as well, his participation in the FIBA World Cup could still be quite interesting for fans who get to see how he does alongside a potential teammate like Davis (if Davis is still with the Pelicans at that point, of course), and alongside other NBA stars. And ESPN would probably love to have Williamson involved. There’s also plenty of precedent of top college players who haven’t yet played in the NBA joining the U.S. national team for international tournaments, from Davis at the 2012 Olympics to Christian Laettner on the 1992 Olympics “Dream Team.” We’ll see if that happens with Williamson or not, but if it does, it might be a significant boost to U.S. interest in this tournament.