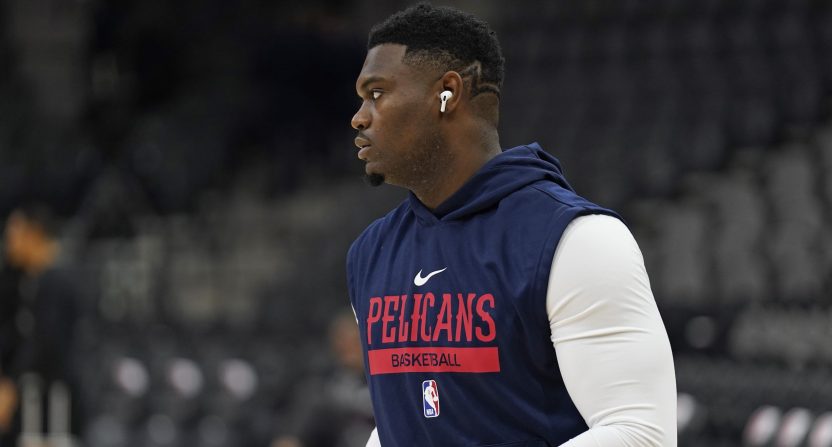 New Orleans Pelicans star Zion Williamson has had a very public issue with his weight throughout his young NBA career, which prompted a hilarious response to a question he was asked on Wednesday night about Thanksgiving.

Following the Pelicans’ win over the San Antonio Spurs, Williamson was asked about his Thanksgiving plans.

He offered a pretty typical response, saying that he will be spending time with his family before heading to the team’s next game against the Memphis Grizzlies.

“Just spending time with my mom, stepdad, friends, older brother, and little brother, and getting on the plane to Memphis,” said Williamson.

Williamson was then asked what Thanksgiving dish he was looking forward to eating. He chose not to answer that question, fearing that he would get roasted on social media for his response.

“You’re trying to set me up,” Williamson jokingly added. “No matter what answer I give, social media going to clown me. So no comment.”

Jen Hale: "What's your favorite dish? What are you looking forward to eating the most?"

Zion Williamson: "You're trying to set me up. No matter what answer I give, social media going to clown me. So no comment."pic.twitter.com/rzsFJ5daZa

While Williamson seemed to laugh off the question, many on social media detailed that it is somewhat sad that the star forward has to deal with this type of criticism.

This is why athletes give media trained responses these days and are scared to show personality. https://t.co/XynqgpB7Gv

Y'all gave this man PTSD about his own body https://t.co/nkoIcRPGFP

Kinda sad that Zion knows he has to answer this question this way so that the kids running IG meme accounts don't get any free content. https://t.co/VXAfRj5IfW

This is actually very sad to see. https://t.co/pbUVWdbdR8

Sad world we live in that unemployed social media trolls got this kid believing he's overweight and not the most athletic dude on the planet. https://t.co/zFl032DlDJ

While Zion Williamson clearly still has some critics, he has certainly been impressive for New Orleans in his return to action this year after his lengthy absence last season.

He is currently averaging 23.1 points per game on the season for the Pelicans which leads all scorers on the team.

Williamson’s impressive play has helped the Pelicans in a huge way as they attempt to make the jump to become a potential contender in the Western Conference.