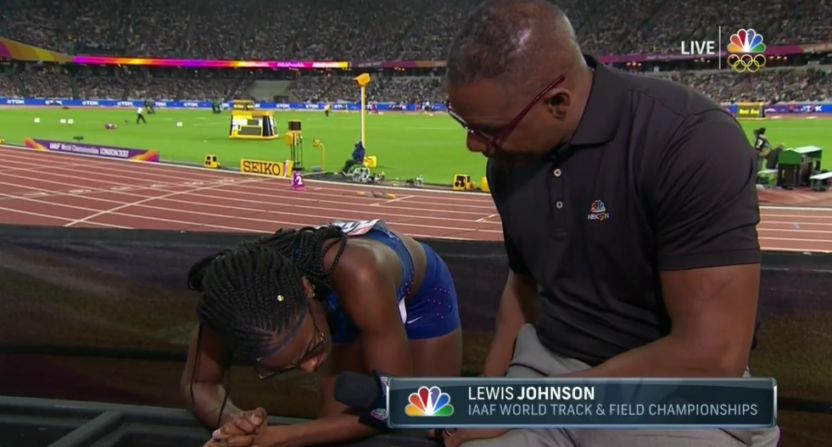 Networks are often looking to get interviews with athletes as soon as possible after their performances, but that sometimes makes for awkward or problematic television. We’ve seen it before with the likes of Richard Sherman’s interview with Erin Andrews where he went after Michael Crabtree, or with any number of Olympic athletes breaking down in tears (Christin Cooper making Bode Miller cry with repeated questions about his brother’s death particularly stands out, as does Shakur Stevenson’s emotional interview about losing the gold-medal fight last summer), or with Joe Rogan interviewing a concussed Daniel Cormier minutes after he was knocked out.

The latest example of a criticized interview comes from NBCSN’s coverage of track’s IAAF World Championships on Monday, where Lewis Johnson interviewed Shamier Little while she was still doubled over trying to regain her breath following the 400-meter hurdles (where she caught a hurdle and even broke it, but didn’t knock it over, and still did well enough to advance to the semifinal). Here’s the clip of the interview:

Little does very well to still get out coherent answers here, but this is supremely awkward television with her bending over and gasping for air while Johnson’s asking her questions. It’s understandable why they wanted to talk to her given that unusual hurdle break, but waiting longer might have been a better idea.

[Update: A NBC spokesperson tells The Comeback that this interview was several minutes after the race, and that Little told Johnson she was ready for an interview before they went on camera.]

Here’s a look at what happened on that hurdle:

They don't make hurdles like they used to. Just as well #400mhurdles #london2017 @shamierlittle pic.twitter.com/DJ8cRZ8Gu6

Shamier Little struck the hurdle with so much power that she broke it. ??

The BBC also got a great look at her expression:

The three emotions you have when you know you're about to miss a bus!

Relax Shamier Little. You're into the next round. #London2017 pic.twitter.com/dzwcFGvv6P

That’s certainly a notable moment, and it’s definitely worth an interview. But the visuals here might have worked better if that interview was done a few minutes later still when Little was breathing more easily.