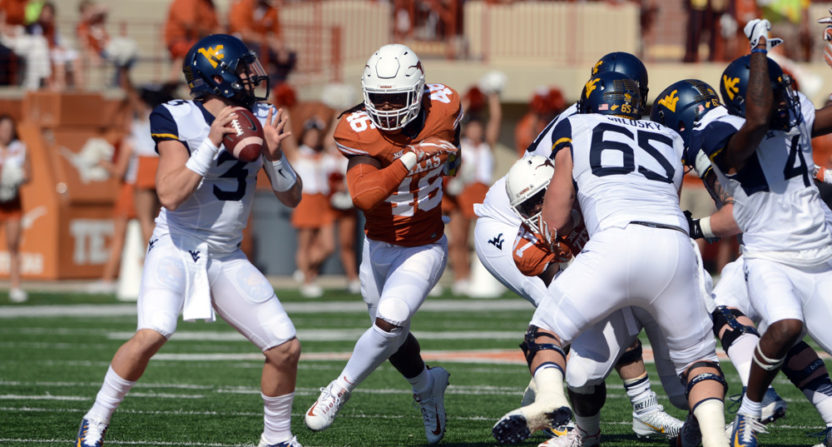 During every college football season, there are a select number of games that really shape the standings in each conference. The Oklahoma Sooners have regained the dominant position in the Big 12 by winning the last two conference championships.

Oklahoma State is poised for a run. Can Baylor, TCU and Texas get back into the hunt? Will Kansas State or West Virginia make a run this year? Will Oklahoma maintain their grip on the conference or will a changing of their guard signal a changing of the guard in the conference? There are more question marks in the Big 12 this season than in recent memory.

Here are the 10 games that will decide who plays in the returning Big 12 Championship Game this season.

This will be Lincoln Riley’s first conference game as head coach and it will be Matt Rhule’s first conference game. A lot is on the line in this one. Baylor has been down and how they play in this game will shape their season. These two teams have split their last six games. Oklahoma has a conference (and national) title on their mind and Baylor wants to get back to where they were just a couple of years ago.

Oklahoma State has won five of the last six games in this series. The Cowboys are looking to overtake the Sooners as the team to beat but they cannot overlook TCU in this game. The Horned Frogs will be much improved from last season and are looking to make a statement early in the conference slate.

Since joining the conference, these two teams have split their six games. The Mountaineers finished in the top three of the conference last season but lose a lot of experience from that team. TCU looks poised to take West Virginia’s spot. This game is about one of these two teams stepping up as a contender in the Big 12.

This is one of the signature rivalries in college football. Texas has been down in recent years but they’ve still played Oklahoma tough winning two of the last four. This is the first game in this rivalry as head coach for both Lincoln Riley and Tom Herman and you can bet they both need to come out with a win.

Kansas State is a team that you never think about but is always going to give you a tough game and is almost always going to finish in the upper half of the conference. For TCU, this game is a must win game if they want to be the third team in the mix for the Big 12 title.\

Oklahoma State has had a tough time in this rivalry but they’ve recently flipped the script on the Longhorns. The Cowboys have won three of the last four in the series and hold a four game winning streak in Austin. Texas needs to regain hold on the rivalries that they’ve owned and this would be a great place to start for Tom Herman. For Oklahoma State, this game is about showing Texas that they have passed them and will continue to control the series.

It’s a trap! For Oklahoma State, this game falls between Texas and Oklahoma on the schedule. The Cowboys have to make sure that they are focused in on the Mountaineers. They must travel to Morgantown and WVU will be waiting with plenty of offensive firepower. Oklahoma State has a two game winning streak in this series but they’ve split the two games in Morgantown since the Mountaineers have joined the conference.

Bedlam! This is the game that everybody in the country has circled as their Big 12 game of the year and it will likely decide the front-runner in the conference. It’s also the most important late season game in the conference and will have a huge impact on the participants in the championship game. Oklahoma has won two straight in this series and four of five, but the Cowboys are becoming a trendy pre-season pick. If you only watch one Big 12 game this season, make it this game.

After a big rivalry game the week before, there is bound to be a letdown here for Oklahoma. This game is about staying focused for the Sooners. Depending on how TCU’s season goes, this game represents the chance to play their way into the title game or play spoiler. Either way, the last five games in this series have been decided by just one score so odds are that it will be a nail-biter.

The last five times these two teams have played in Stillwater, the game has been decided by one score. The Cowboys have won each of those five games but how long can they continue to win these close games? The positioning of this game on the schedule means that it could end up being the most important game on each of these teams schedules.