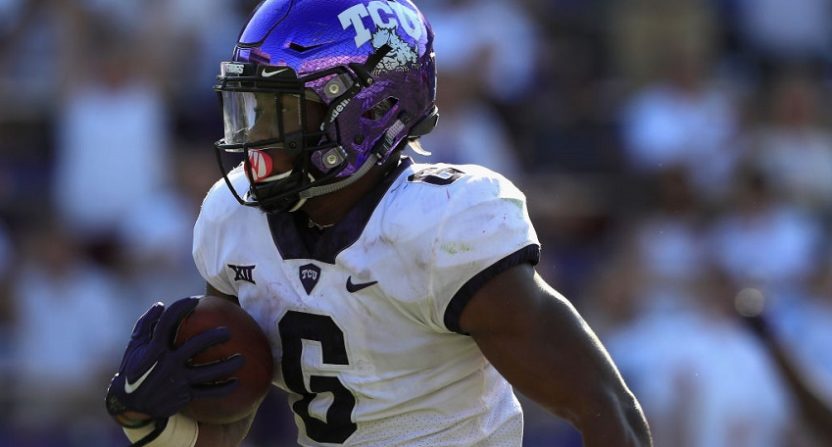 Week 4 in college football either brought some clarity to the College Football Playoff picture or created more questions, depending on your view. There was one surprising result in the Top 25, while other contenders flexed their muscles and confirmed what we already believed about them. And one coach may have saved his job for now.

These are 10 key numbers that stand out from the past weekend’s action:

52: Oddsmakers were leaning on Oklahoma State’s hype train derailing. What it took, it appears, was a competent opponent. For all the complexities of modern football strategy, the aims can be straightforward. Control the line of scrimmage. Win the turnover battle. You’re probably going to win the game. OSU never found its rhythm on offense in the 44-31 loss to the Horned Frogs, committing four turnovers. Much of that was because TCU was able to run the ball when it wanted (52 attempts) and control the clock.

599: Vanderbilt won’t want Bama again for some time. Alabama ran up 677 yards of total offense on the Commodores (496 on the ground). The Tide allowed just 78 yards of total offense. Vandy managed just 2.05 yards/play, converted only one of 11 third downs, had three first downs, and never took the ball into Alabama territory. Oh, and that game was at Vanderbilt. That’s about as emphatic a beatdown as one can witness on a football field. We don’t know what will happen when Alabama must pass to win. We may not find out until the CFB Playoff.

0: Some numbers should concern Michigan about their offensive line performance. Purdue sacked Wolverine quarterbacks four times after managing just one in their first three games. If you take out Chris Evans’ long run, the Wolverines were getting less than three yards/carry with the convention run game. That said, great defense can account for an underwhelming offense. Purdue’s newfangled attack went 0-12 on third down attempts and managed just 189 total yards. Worth reiterating: Michigan lost eight NFL Draft picks on defense from a year ago.

9-1: Luke Del Rio led Florida on a 13-point comeback in the fourth quarter to edge Kentucky 28-27. It was not the first time Florida has come back to win 28-27 in the fourth quarter to preserve a streak (last UF loss to Kentucky was in 1986). With one-score wins against Kentucky and Tennessee this season, McElwain is 9-1 in one-score games during his tenure at Florida. Fortune plays a significant role in that record. One wonders where McElwain would be in those games with average or poor luck.

305: Penn State did not translate their total offensive production into points against Iowa. But the Nittany Lions got a ton of that production from running back Saquon Barkley. He rushed 28 times for 211 yards and had 12 receptions for 94 yards, producing 305 total yards. His 40 touches were nearly as many as he had (49) the first three games combined. Penn State also had Barkley back returning kicks.

13/14: No coach got a bigger job status win than Todd Graham upsetting Oregon, 37-35, in Tempe. Graham looked like he may not last through the season. Incredibly, it was ASU’s defense that put up when it mattered, not through aggression but through consistency. The Ducks converted just one of 14 third down or fourth down conversion attempts. The Sun Devils even did a not so bad job restricting Oregon to 4.0 yards/carry.

202: Washington struggled to establish the run in non-conference play. But it was the Husky ground game that led the way in the second half against Colorado. Myles Gaskin ran for 202 yards and two touchdowns (one for 57 yards) on 27 carries. Much better showing from the unit that carried Washington through Pac-12 play last season and averaged 5-plus yards/carry in eight games.

1.3: Look at UVA all of a sudden. Virginia rolled over Boise State, 42-23, on the blue turf. The Cavaliers had one road win during the previous four seasons combined. This loss was Boise State’s first by multiple scores at home since 2001, when Mike Price’s Washington State beat Dan Hawkins’ Broncos, 41-20. We could plunge into the box score intricacies. Or we could just point out that Boise State produced 30 rushing yards on 24 carries and let you fill in the rest.

7: Florida State has had a rough 2017. The Seminoles opened the season losing to Bama and losing starter Deondre Francois for the season. Hurricane Irma cost FSU an additional two scheduled games. Following that, the Seminoles lost 27-21 to N.C. State. They entered September as a playoff favorite. They will exit it all but eliminated from the playoff. One of the hazards with a true freshman QB is capping off drives. FSU had seven drives inside the N.C. State 40-yard-line that did not result in touchdowns. One would have made the difference.