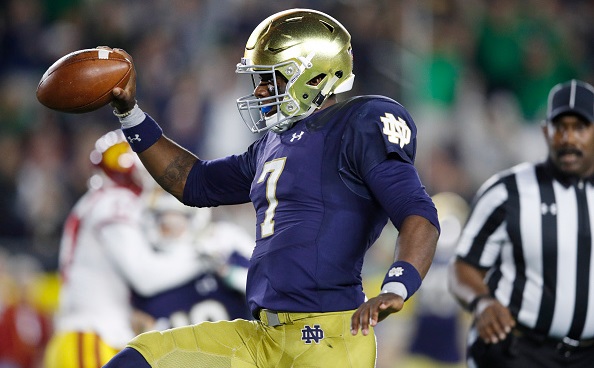 Week 8 of the college football season is in the Wikipedia pages. The Fighting Irish showed their legitimacy while exposing USC. TCU finally rolls over Kansas. Frustration is growing at Florida State. And Lane Kiffin’s offense is rolling up the yardage.

Here are 10 key numbers from the weekend.

377: Overlooking Notre Dame is hard. But that’s what has occurred this season. The Fighting Irish ran all over a soft, pliable USC Trojan team in a 49-14 win. Notre Dame amassed 377 rushing yards and five touchdowns on 47 carries. Besides the narrow loss to Georgia, Notre Dame’s closest game so far is a 20-point win over a ranked Michigan State in East Lansing. Irish to the playoff? They will have the résumé if they win out. But they will need to win out. Their next game is against N.C. State. They also have road trips to Miami and Stanford.

8.3: The Wolverines needed their defense to keep them in the game against Penn State. That did not happen. Joe Moorhead exploited the right matchups all night. Saquon Barkley broke big plays. The Nittany Lions poured it on early, poured it on late, and averaged 8.3 yards/play in a 42-13 win. Michigan only managed two sacks and allowed seven. This game was just round one for Penn State. They play Ohio State and Michigan State on the road the next two weeks.

21: TCU killed Kansas 43-0. The Horned Frogs allowed just 21 yards of total offense. Seventeen of those yards came on Kansas’ final drive. No surprise that a top five TCU played so well against Kansas, right? Wrong. That was Gary Patterson’s first multiple-score win over the Jayhawks since 2013 when TCU won 27-17.

4: FSU quarterback James Blackman fumbled at the Louisville 24-yard line with 2:05 remaining. The Cardinals drove for the game-winning field goal, dispatching the Seminoles 31-28. Florida State is now 2-4. One score has decided all five of its games since Alabama. Jimbo Fisher got testy with a fan in the aftermath of this one. One can understand his frustration. FSU, entering the season a playoff favorite, could miss a bowl game.

12: Tennessee was an unconscionable (+36.5) underdog against “rival” Alabama. The Vols did not cover, losing 45-7. Tennessee did score its first touchdown since the second quarter against UMass. But that came on a 97-yard INT return. The Vols offense has scored 12 points in its last 14 quarters. If now is not the appropriate time to move on from Butch Jones, what would be?

2: Baylor came two points away from the comeback. West Virginia entered the fourth quarter with a 38-13 lead. Baylor scored 23 unanswered points to bring it to 38-36, but failed on the two-point conversion to tie it with 17 seconds left. That defeat drops the Bears to 0-7, with two one-score moral victories against ranked opposition.

10: Virginia Tech scored two defensive touchdowns and one special teams touchdown against North Carolina. A turnover set the Hokies up in the red zone for an additional touchdown. That turned what was a clear butt-kicking into a demolition. Whatever the manner, this was Larry Fedora’s 10th straight loss to a Power 5 team. Since Nov. 5, 2016, North Carolina’s only wins are against The Citadel and Old Dominion.

11.5: How about Steve Addazio’s dudes? Boston College crushed Virginia, 41-10, exposing one of the nation’s shakiest 5-1 records. The Eagles completed 19 of 24 passes and averaged 11.5 yards/attempt. That was only the fourth time BC had completed 50 percent of its passes in 2017 and just the second time BC had gone above six yards/attempt.

42: There was an H-Town takeover Thursday night, though not one Cougars fans appreciated. Memphis scored 42 points in the second half after being shut out in the first to edge Houston, 42-38, on the road. The Tigers scored touchdowns on their first six drives to start the half. Memphis is 6-1 and ranked, with four one-score wins.

804: Lane Kiffin’s FAU beat North Texas 69-31. Nice. More impressive was the Owls posting 804 yards of total offense. That was Conference USA West leader North Texas. If Kiffin can beat Western Kentucky and Marshall the next two weeks, he will be in control for a conference title his first season. Will Lane be one and off to a more prominent job?