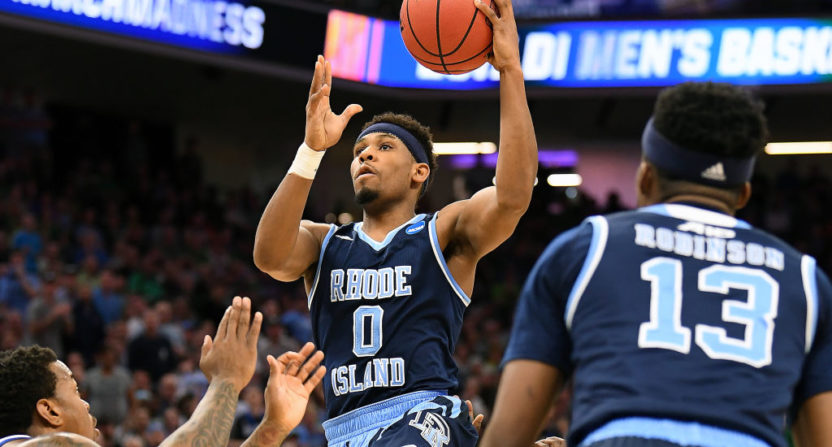 College basketball’s bluebloods are trying to shut mid-majors out of mainstream college basketball as much as they can. But every year we see a few small programs put together special seasons and shock someone in the NCAA Tournament.

Here’s a look at 10 mid-majors who may bust your brackets come March. We’re going for legitimate sleepers here, so that’s why Gonzaga and Saint Mary’s — Top 25 teams if you ask me — aren’t on this list.

Nevada reached the NCAA Tournament last year as a No. 12 seed but went one-and-done. The Wolf Pack outstandingly had four selections to the 2016-17 All-MWC first and second teams, but three of those players departed either because of graduation or the pros. That makes it easy to write Nevada off, but Eric Musselman has reloaded with a roster that could be even better than last year’s.

And then there’s all the transfers. There’s the Martin twins — wings Caleb and Cody — former top 100 recruits who played two seasons apiece at NC State; Kendall Stephens, another top 100 player out of high school, who started 32 games as a three-and-D man in three years at Purdue; Darien Williams, a former JUCO standout who played 16 minutes a game for St. John’s last year; and Hallice Cook, a former top 50 recruit who earned Pac-12 All-Freshman honorable mention at Oregon State in 2014-15.

Putting the “sleeper” label on Rhode Island seems slightly unfair. The Rams were ranked in the Top 25 at one point last year and won an NCAA Tournament game. But they’re not getting a ton of preseason hype, so I’ll throw them in.

The Rams lose starting forwards Hassan Martin and Kuran Iverson, but they return a loaded backcourt led by seniors E.C. Matthews and Jared Terrell. Matthews averaged 14.9 points last season, and Terrell is as good a secondary scoring option as you’ll find at the mid-major level. He averaged 12.6 points.

With this backcourt, Rhode Island doesn’t need a ton of production up front, but it will need sophomore forward Cyril Langevine to build on his 3.2 points and 4.5 rebounds from last year.

Sticking with the Atlantic 10 here. We’ll see how good St. Bonaventure is, but one thing’s for sure: they’ll have a terrific offense. Coming off back-to-back 20-win seasons for the first time since the 1970s, the Bonnies return a pair of dynamic senior guards in Jaylen Adams and Matt Mobley, both of whom earned preseason All-Conference honors this month.

Adams not only scored north of 20 points per game last year, but he also finished sixth in the nation with 6.5 assists. Mobley led the nation in minutes and made 86 threes. So mark your calendars for Jan. 13 and Feb. 16 when the Bonnies face Rhode Island.

Vermont cruised through the America East last year and then gave Purdue a fight in the NCAA Tournament. With their top four scorers back, the Catamounts are heavy, heavy favorites to win the conference once again.

This team is good on both sides of the ball, and 6’6″ forward Anthony Lamb, last season’s leading scorer, rebounder and shot-blocker in only 22.5 minutes per game, should only be better as a sophomore, which must be terrifying to everyone else around the conference.

Here’s another veteran group with a winning history. The Bison return their entire rotation, including three seniors and four juniors, from last year’s Patriot League champions that nearly took down West Virginia in the NCAAs.

Like Vermont, Bucknell plays well on both ends of the court. But the Bison are particularly good offensively thanks to smart shot selection. They shot 54.3 percent on two-pointers last season, putting them in the top 25 nationally. There are a lot of teams on this list with good guards and questionable frontcourts, but Bucknell has good players all around. Forwards Zach Thomas, a preseason All-Conference selection and Nana Foulland, the preseason player of the year, combined for 31 points per game while guards Stephen Brown and Kimbal Mackenzie combined for 23 points and 7 assists.

Alize Johnson could be the MVC’s best pro prospect since Anthony Tolliver. The preseason conference player of the year averaged 14.6 points and 10.6 rebounds last season, and he’s a freakish athlete for a 6’9″ mid-major player. And Paul Lusk has surrounded him with several perimeter weapons, most notably seniors Dequon Miller and Ronnie Rousseau III, and a defensive anchor in junior forward Obediah Church.

The Bears won’t have many chances to prove how good they are. Their toughest non-conference games are against South Dakota State, Georgia Southern and Colorado State. They’ll have some tougher challenges in the MVC facing Illinois State, Loyola Chicago and Northern Iowa, but none of those are legitimate tests for what Missouri State could face in March.

After falling one game short of last year’s CAA title, Charleston is this year’s CAA favorite. The Cougars return their top six players, including preseason all-conference selections guard Joe Chealey (who was also voted player of the year) and forward Jarrell Brantley.

The Cougars will be a sneaky pick in March because of their ability to lock down on defense and take care of the ball on offense. They turned the ball over in less than 16 percent of possessions last year while holding opponents to a 48 effective field goal percentage.

Remember when Makai Mason took down Baylor in 2016? Well, Mason is back after missing the entire 2016-17 season with a foot injury. If there’s any silver lining to him missing his junior year, it’s that a few younger players got valuable extra experience. (And they still won 18 games and were one victory away from returning to the NCAA Tournament without him.)

Junior guard Alex Copeland made a huge jump and averaged 12.9 points while sophomore wing got to play Miye Oni 31.2 minutes per game as a freshman. Couple those two with Mason and his ability to drop 20 points a night, and teams will be scrambling to defend Yale’s backcourt.

Greg Kampe lost floor generals Stevie Clark and Sherron Dorsey-Walker, but he’s groomed Brailen Neely, who averaged three assists as a freshman, as the program’s next point guard. Scoring-wise, this team is set to continue Oakland’s tradition of high-powered offense, something that wasn’t true of last year’s team.

Senior guard Martez Walker averaged 17.8 points last year and senior forward Jalen Hayes, who averaged 15.9 points and 8 boards surprisingly lost out to Northern Kentucky’s Drew McDonald for preseason conference player of the year. Add in sharpshooter Nick Daniels and Illinois transfer Kendrick Nunn, a double-digit scorer from a Big Ten program, and the Golden Grizzlies will be plenty of fun to watch.

Hopefully we’ve all learned by now to trust in Kermit Davis. He’s turned Middle Tennessee into a perennial Conference USA contender, and the Blue Raiders have a chance to make their third straight NCAA Tournament this year.

MTSU lost three of its top five scorers, but retains Giddy Potts, one of the best shooters — and names — in college basketball.