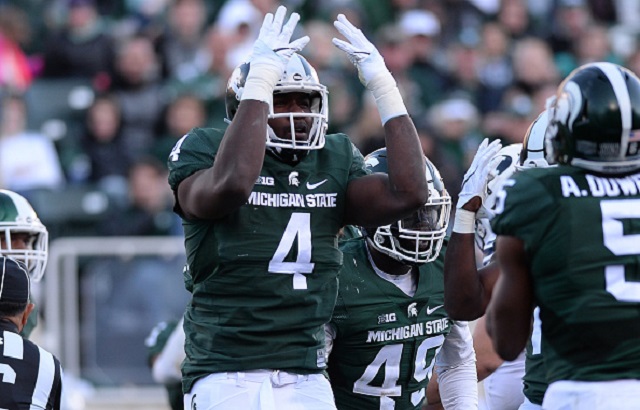 As college football hits the back-half of the regular season, there have been some surprising teams which already have to dig themselves from a major hole to become bowl-eligible. Some programs we have come to expect to make a bowl game without thinking about it are skating on thin ice at the midway point of the season and could soon be sinking.

Here is a look at 10 of the most surprising teams which may not reach the bowl season this year.

The defending Big Ten champions reached the College Football Playoff last season, but just getting to the six-win minimum has become a significant challenge for Mark Dantonio’s program this season. The Spartans are trudging through a four-game losing streak that has included three setbacks at home, all by double digits. Michigan State was blasted by Wisconsin (30-6), BYU (31-14) and last week by Northwestern (54-40). Throw in a road loss at Indiana and all of a sudden, Michigan State’s best win this season is against a two-win Notre Dame. Yikes.

Oh, and then there is the remaining schedule. Michigan State still has to play Michigan and Ohio State, but at least they get those games at home, right? RIGHT? Michigan State likely has to avoid losing a game at Maryland, at Illinois or at Penn State just to get to a bowl game this season, unless they can somehow pull themselves together and stun the Wolverines and/or Buckeyes. We can’t rule it out, but the evidence on the field speaks for itself so far this season.

The Oregon Ducks have lost four straight games, with the last two coming in blowout fashion against Washington and Washington State. The Ducks have a major defensive problem and still have to play some offensively talented teams like California, USC and Utah. They also still have to play Stanford. These Ducks are cooked as far as postseason hopes are concerned, because they will get crushed on defense a few more times this season.

Some went so far as to throw Notre Dame in the preseason playoff picture, but now Brian Kelly is boiling on a hot seat in South Bend with a miserable 2-5 record. As previously discussed, the Irish must win four of its five remaining games. About that…

#NotreDame needs to win four more games to be bowl eligible. They may not even be favored in four games the rest of the year. pic.twitter.com/pbXt79lUUy

At the time I tweeted that, Miami and Virginia Tech looked a little bit better as threats. That may still be the case for Notre Dame, but the Irish do get those games at home. Then again, Notre Dame has lost home games to Duke and Stanford already. Could Navy pick up a win against the Irish? It’s possible. (The Midshipmen did beat Houston.) Notre Dame needs a very effective bye week to put things back together and smooth things over. If not, the Irish will be home for the bowl season for the first time under Brian Kelly.

The Bruins have some tough hurdles to pass if they are to return to the bowl season this year. Needing three wins in its final five games, UCLA must first get by Utah (6-1) and a surprisingly confident Colorado (5-2) before eventually playing in-state rivals USC (4-3) and Cal (3-3). A healthy Josh Rosen figures to give UCLA a stronger chance down the stretch, but if the young passing phenom is banged up and has to miss any playing time, UCLA could be in real danger.

Bill Snyder is no stranger to flirting with bowl eligibility. Just last year, the Wildcats reached the postseason with a 6-6 record. They may have to do that again this season. Kansas State has some toss-up games to play, but also must play Baylor and a pretty decent Oklahoma State team. Kansas State gets a couple softballs in Kansas and Iowa State, which helps, but a road game at TCU is a toss-up, as well as a home game against Texas. There are no guarantees for Kansas State the rest of the way, but they could slide in with the bare minimum.

One of the strangest facts about the 2016 season is that the two teams that met in three straight MAC title games are a combined 2-12.

We have to lump these two together because the two programs have been at the top of the MAC for the past few years. Yet they are a combined 2-12 this season and now one loss away from being ruled ineligible for postseason play. That is simply amazing.

Arizona has never failed to reach the postseason since hiring Rich Rodriguez, but that streak could end this season, Rich Rod’s fifth year in Tucson. Just within Pac-12 play, Arizona has been outscored 164-89 in four games, all losses. In order to reach the six-win minimum, Arizona will have to win four of its remaining five games, which includes back-to-back games against Stanford and Washington State (in Pullman). Arizona’s remaining opponents are a combined 20-12. Arizona looks very likely to be staying home this bowl season.

There is no doubt Dan Mullen has done an outstanding job at a school that had nowhere to go but up. Mullen’s gradual rise to a No. 1 ranking in 2014 has now apparently started to trend downward ever since. After winning eight regular season games last year, the Bulldogs are now at risk of not reaching a bowl game in their first season, post-Dak Prescott. Two non-conference losses to South Alabama and BYU have hurt Mississippi State’s chances the most, but the back-half of the schedule is brutal. Mississippi State will likely have to win three of the following games: Texas A&M, at Alabama, Arkansas, at Ole Miss. Count on Mullen’s program staying home this bowl season.

The Red Wolves have been in the postseason each of the past five seasons out of the Sun Belt Conference, which does not have a ton of bowl bids to hand out in a typical season. The schedule could lend itself to Arkansas State finishing strong enough to get into the postseason, with just one game left to play against a team with a winning record. The remaining opponents on the schedule are a combined 14-22, including 5-1 Troy. Arkansas State is 2-0 in the Sun Belt and should manage to make a run to the postseason, but the margin for error is relatively small and this is a team that has lost a game to an FCS opponent (Central Arkansas). Losses to FCS teams can always put a big dent in any postseason plans.