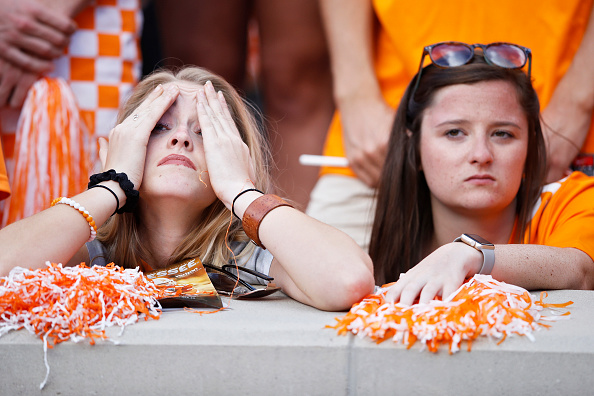 College football season is moving fast. Week 5 is already in the books. The calendar says it’s October. Conference seasons are showing us what to really think of several teams.

Here are 11 key numbers from a compelling weekend.

0: Tennessee committed four turnovers. Tennessee managed 2.73 yards/play. Tennessee converted one of 12 third-down attempts. Tennessee scored zero points in a 41-0 demolition by the Georgia Bulldogs in Neyland Stadium. This loss was the worst under Butch Jones, the worst to Georgia since 1981, and worst at home for Tennessee since 1905. 1905 was the year before the introduction of the forward pass.

+122: Alabama has played two SEC games against Vanderbilt and Ole Miss. The Crimson Tide have outscored conference opponents 125-3 through their first two games. Perhaps someone pops up to give Bama a game. But right now, it looks as though no one will challenge Alabama until the Iron Bowl or the SEC title game against Georgia. FSU is tracking poorly. So are many SEC teams. Those may end up being the Tide’s only top 25 wins.

$985,000: It rained in Tiger Stadium. LSU invited Troy to play the role of Christians on homecoming week. The Tigers fell 24-21 to Neal Brown’s Troy at home. It was LSU’s first non-conference loss at home since Nick Saban lost 13-10 UAB in 2000. Troy also received a check for their trouble. Entering the game as a 20.5 favorite, it was LSU’s biggest upset since losing to Tulane in 1982. Ed Orgeron’s buyout remains the same at $12 million. Paying it seems more reasonable by the week.

8: Sam Darnold has thrown eight interceptions through his first five games and at least one in each of those five games. He also fumbled away USC’s final drive in a 30-27 loss to Washington State. A preseason Heisman favorite, Darnold ranks 41st nationally in yards/attempt and 56th in passer rating through five games. Someone was overhyped. Though, as Tom Luginbill suggests, that may be the pieces around Darnold vs. Darnold himself.

6: Auburn’s defense has been lights-out. The question was the offense. Gus Malzahn appears to have started the motor. The Tigers have scored 100 points the past two weeks. In the 49-10 drubbing Mississippi State, Jarrett Stidham averaged 16.5 yards/attempt through the air. Six different Auburn players had a scrimmage play of 40 yards or longer.

2: Penn State running back Saquon Barkley had a pedestrian day from scrimmage with 107 total yards on 24 touches against Indiana. He still made a mark with two unorthodox touchdowns, though. Barkley returned the opening kickoff 98 yards for a touchdown. He threw a 16-yard touchdown pass to DaeSean Hamilton in the fourth quarter. The great programs are the ones running trick plays up 24 with four minutes remaining against Indiana.

301: Stanford’s Bryce Love has been the best college football running back not named Barkley. He may just be the best. The junior rushed for 301 yards and three touchdowns on 25 carries against Arizona State. That effort brought him to 1,088 yards on the season, after five games.

-8: Ohio State dismantled Rutgers 56-0. The Scarlet Knights’ rough transition to the Big Ten continues unabated. Rutgers used three quarterbacks. They completed 11 of 27 passes for 92 yards. Rutgers did not complete a single pass to a wide receiver. Total scrimmage production from the Scarlet Knights’ wide receiving corps: -8 yards. Hunter Hayek completed a pass back to Rutgers QB Kyle Bolin for a loss of eight.

33: Scott Frost has brought UCF back. The Knights blew out Memphis 40-13. They racked up 603 total yards of offense, including 350 yards rushing on 49 carries. UCF’s average victory margin this season is 33 points. Two of the three teams, Maryland and Memphis, were halfway decent opponents. Too soon to talk up the USF game as a battle of undefeated teams in late November?

7: BYU moved the ball against Utah State. They averaged more than five yards per play. They scored two offensive touchdowns, matching their total from the three previous games against FBS team. The bad news? Seven turnovers. Seven in the 40-24 loss. Three fumbles. Four interceptions. Of Utah State’s 40 points, 33 came either on a defensive touchdown or on a drive that began in BYU territory. Brutal.