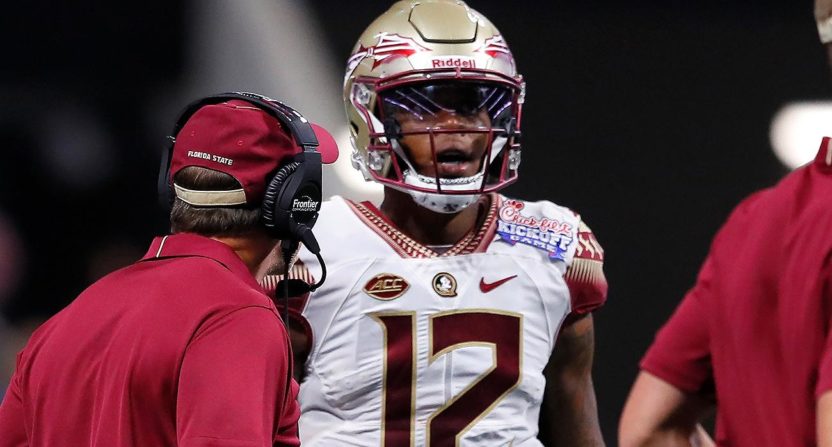 Week 1 of the new college football season, which lasted nearly a week, is in the metaphorical record books. Here are 12 important numbers to take away from the first week’s worth of games.

No. 12: Key to whether Florida State could hang with Alabama and be the force everyone anticipated during preseason was how their offensive line would hold up. Early returns were not so great. It was costly. The Seminoles could not establish the run without Dalvin Cook’s explosiveness (Akers and Patrick combined for 47 yards on 16 carries, none longer than nine yards). No. 12 Deondre Francois took the same battery of wicked hits he took last season.

One, with an unengaged Florida State lineman watching a blitzing Alabama player rush by, knocked Francois out for the season with a knee injury. A 12-0 run from here could get FSU to the playoff. The gauntlet won’t be as grueling from here forward. But into it steps James Blackman, a true freshman quarterback.

79.2: Many quick comebacks require luck. Turnovers. Good field position. Perhaps a special teams touchdown. Josh Rosen led UCLA back against Texas A&M the hard way. The average length of UCLA’s five touchdown drives from the late third quarter onward against Texas A&M was 79.2 yards. That included drives of 85 and 96 yards. The longest of those drives took 2:04.

Rosen will get the plaudits he deserves, as the best quarterback in the 2018 NFL Draft class. Jets fans will be salivating (and hoping he doesn’t get hurt). This game was clear evidence that the scepter/pimp cane was a poor decision. Time to relegate it to the same karmic scrap heap as the swag copter.

Music to our ears. • ?? • Strike up the band, the Aggies keep scoring. #itsaboutus #aggiefblife

129: That’s what Michigan ranked in FBS entering 2017 with just five returning starters. As the Wolverines’ beatdown of Florida showed, take talent over experience, always. Sophomores from Harbaugh’s 2016 class, such as G Michael Onwenu, CB LaVert Hill, and LB Khaeleke Hudson stepped right into the breach without missing a beat. Fellow sophomore LB Devin Bush had three TFL and two sacks. Freshman wideout Tarik Black had two catches for 86 yards and a touchdown and a forced fumble on special teams.

Michigan may struggle if there’s an injury crisis, especially on the offensive line. But it’s enthusiasm unknown to mankind in Ann Arbor, for now.

14: Rushing attempts reflect game control. Just 14 of Texas’ 84 offensive plays during their 51-41 loss to Maryland were carries by a running back. In truth, it’s hard to choose just one demonstrative statistic from the Longhorns’ debacle. The Texas offensive tally was 20 points with three touchdowns coming from the defense and special teams.

The Longhorns’ defense looked as though it spent much of the offseason practicing things that were not tackling or coverage, conceding more than 15 yards/pass and six yards/attempt to the Terps. This was a Maryland team that lost 121-6 to Michigan and Ohio State last season. Longhorn football has become the one not cool thing about Austin.

10-2: It’s non-conference season, which means it is peak conference equipment-measuring season. The Big Ten went 10-2 outside itself in Week 1. Big Ten teams took down two ranked opponents, Florida and Texas. The two losses were 2016 incompetents Rutgers and Purdue giving ranked opponents — Washington and Louisville, respectively — more trouble than they anticipated. We could mention that Minnesota and Illinois labored against MAC teams and Nebraska could not pull away from Arkansas State, but why ruin the narrative?

9.08: The glaring question about Virginia Tech heading into 2017 was at quarterback. Jerod Evans left early, only not to be chosen in the NFL Draft. The Week 1 returns on redshirt freshman Josh Jackson were promising. He ran or threw the ball 37 times and produced 337 yards and two touchdowns. Not bad for a three-star recruit from Michigan who didn’t get offered by the Wolverines or Spartans. Ironically, his son is the first player longtime Wolverine assistant Fred Jackson has been measured with his praise about.

5/6: “Don’t trust Larry Fedora in September” should be a bigger mantra than it is. Cal flew East and beat the Tar Heels 35-30 on the road. This was the fifth time in Fedora’s six seasons that North Carolina lost their FBS opener. The sixth season was 2014 when North Carolina beat San Diego State, 31-27, with help from a pick six on the goal line. The Tar Heels celebrated that feat by losing their next four games in succession. Why does Fedora keep getting linked for bigger jobs again?

3: Missouri gave one of the most explosive offensive performances of Week 1 against Missouri State. Drew Lock threw for 521 yards and tied the SEC record with seven touchdown passes. Missouri led the nation with five plays of longer than 50 yards during their first game.

Why the number 3? That would be the three scrimmage plays of 60 yards or longer the Tigers’ defense allowed against Missouri State. In the seasons where Missouri has not reached bowl play since joining the SEC, the issue has been getting both the offense and the defense to perform in the same season. This was not an auspicious start. They will play tougher defenses.

549: Arizona State was a one-dimensional team in 2016. They passed the ball pretty well. They could not run the ball, could not stop the pass, and were porous the few times opponents opted to run. How did the Sun Devils start against New Mexico State? They gave up 398 yards through the air, allowed 5.0 yards/carry, and rushed for just 40 yards on 20 carries. A fourth quarter pick six allowed them to hang on for a 37-31 win. The Sun Devils will need some more octane to keep Todd Graham near his family. The clear first step is to bring back the Britney Spears headset.

4.52: Pitt escaped against Bo Pelini’s Youngstown State, edging the FCS team 28-21 in overtime after blowing a 21-0 lead. The Panthers were among the nation’s most exciting teams to watch in 2016, with a prolific offense perfectly countered by a horrific defense. After losing offensive coordinator Matt Canada and four offensive players to the NFL Draft, Pitt averaged just 4.52 yards/play against an FCS opponent.

As worrisome? Their defense looked a lot like last season, allowing 9.7 yards/pass. If you’re wondering why Bo Pelini is staying at hometown FCS Youngstown State, remember Nebraska is still paying him $12.29 per minute through next season.

13: Army had two pass attempts for zero yards against Fordham. There’s not much reason for the forward pass when you average 10.7 yards/carry en route to a 64-6 demolition. Quarterback Ahmad Bradshaw produced 177 yards and two touchdowns on just nine carries. But, the most telling number may be 13. That is the number of Army ball carriers who had at least one run of longer than 10 yards in that game.

614: FCS James Madison posted 614 total yards in a 34-14 manhandling of East Carolina. The Pirates gave up three touchdowns of 70-plus yards from scrimmage. That game is what replacing Ruffin McNeill, who took the team to four bowl games in six seasons and had a 10-win year, does for you.