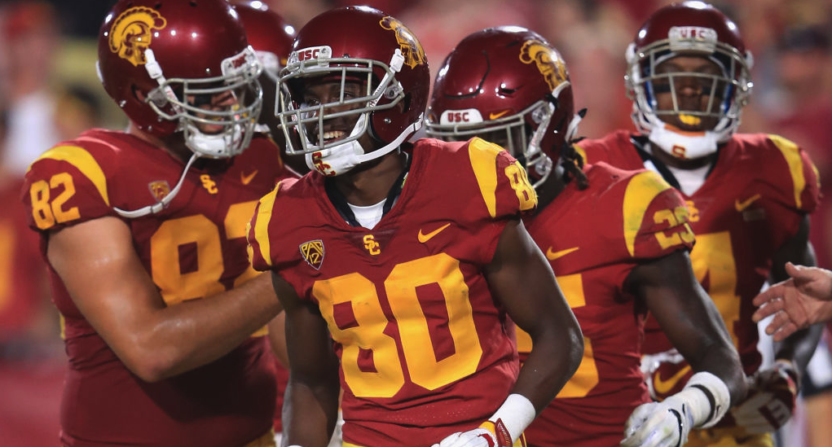 The opening weekend of the 2017 college football season had some big matchups played at neutral sites. But Week 2 brought the action back to campus and it felt like the season truly began with several big games. These are 12 important numbers to take away from the second full week of the season.

+5.8: Ohio State beat Oklahoma, 31-16. Baker Mayfield averaged 11 yards/att passing. That was 5.8 yards/att more than his counterpart J.T. Barrett. Mayfield, rocketing up Heisman power rankings as we write this, completed 77 percent of his passes for 386 yards, three touchdowns, and zero interceptions.

His only grave miscalculation of the evening was not realizing that he could not plant a flag into field turf. The loss won’t cripple the Buckeyes – they’ve endured worse and gotten to the playoff – but their offense needs to get better.

Don’t leave the OSU defense out of criticism. Mayfield was right in saying that this beat down should have been worse. OU entered Buckeye territory on its first four drives, somehow coming away with no points. Ohio State forced just one three-and-out from Oklahoma all game.

623: All aboard the USC hype train. The Trojans posted 623 total yards on Stanford in 74 plays. Sam Darnold completed 21/26 passes for 316 yards and four touchdowns. Both Stephen Carr and Ronald Jones II went over 100 on the ground. It was a comfortable 42-24 win. While we’re on the topic, how good is Stanford? Last year’s Cardinal team underwhelmed. They lost two Top 10 draft picks. Their last win over a quality opponent was… the Rose Bowl against Iowa after 2015?

11: Whether Clemson’s offense is up to another Playoff run is unsettled. But the Tiger defense is. It may even prove better than last season’s, judging by very early returns.

6: Notre Dame lost 20-19 to Georgia at home. The Irish will be frustrated over this one for a while. Notre Dame got the ball inside the Georgia 35 six times, but scored just one touchdown on those drives. Twice in Brian Kelly’s seven seasons, the Irish offense has finished inside the Top 50 in red zone touchdown percentage. Toss in a couple of fumbles and a postgame press conference flare-up. It was vintage Kelly, which may be the problem.

9.05: Lamar Jackson winning a second Heisman? His candidacy will be grounded in highlights and statistics. Jackson compiled many of those in Louisville’s 47-35 win over North Carolina. Passing and rushing, he touched the ball 58 times, producing 525 total yards and six touchdowns. That’s a rate of 9.05 yards/play.

0: Arkansas drove the ball inside the TCU 5 twice. The Razorbacks produced zero points on those drives. Missing the touchdown opportunities was bad enough. Missing two field goals of 23 yards or less was just awful. The second trip could have tied the game in the fourth quarter. Advanced stats have been kind to Bret Bielema. The W-L record hasn’t. In his fifth season, Bielema is now 21-27 against FBS opponents.

3: We saw Western Michigan trouble USC. No such thing happened against Michigan State. The Spartans defense blanked Western Michigan’s offense (scored on fumble and kickoff returns). Two games in, MSU’s defense has allowed just one field goal, on the opening drive against Bowling Green. They have stopped 25/28 third down attempts. It’s too early to label the MSU defense “back” – it was MAC competition – but signs are encouraging and they won’t play many offensive juggernauts in the Big Ten.

22: Northwestern was supposed to be lined up well for 2017. Well-regarded QB Clayton Thorson was in his third year. Senior running back Justin Jackson returned after a 1500-yard season. Much of their defense came back as well. But the Wildcats have hamstrung themselves with another poor start. They needed a fourth quarter rally to beat Nevada in Week 1. Duke obliterated Northwestern 41-17 in Durham in Week 2. The Wildcats managed just 22 rushing yards on 21 carries against Duke. Ouch.

59: Eastern Michigan had faced 58 Power 5 opponents during its history. It took the 59th attempt for the Eagles to get a win, beating Rutgers, 16-13. Heck of a triumph for the Eagles, best known for the cinder block debacle and the university’s students/faculty wanting to stop playing FBS football. Hope the Big Ten is enjoying its television footprint.

93: A botched snap and a comedy of errors led to Louisiana Tech recovering a fumble at its own 7-yard line. The play began on Mississippi State’s 6-yard-line. The 87-yard loss resulted in Louisiana Tech having 3rd and Goal from 93 yards away. The box score will note a nine-play drive lasting 6:30 that gained a total of three yards.

13: The Illini have come roaring into 2017. Illinois beat Western Kentucky 20-7 at home. Lovie Smith’s team is now 2-0. They needed a pick six to get there. But, that result is still notable. It’s Illinois’ first multiple-score FBS win at home over a non-MAC opponent since beating Cincinnati 45-17 in 2013.