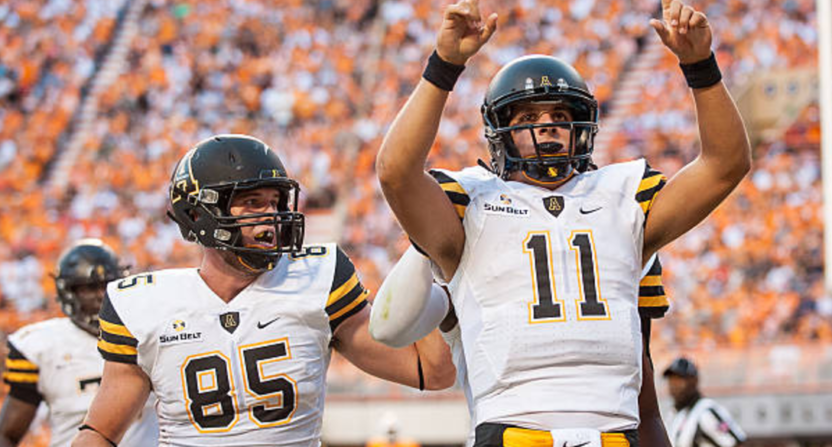 The 2016 college football season is almost here. It’s less than 10 days before the start. This is a good time to talk about trap games. These are games are extraneous factors which may throw the favored team off their game and give the underdog a bit of an advantage.

Often, these are games that players, at least subconsciously, overlook. Sometimes, it’s looking ahead to an opponent the following week. Sometimes, it’s coming down from a charged game the previous week. In a “sandwich” game, it can be both. There are games where teams are unlikely to be up for it after a string of tough physical contests. College football is a game of weekly routines. Always keep an eye out for abnormal travel.

With those factors in mind, here are 12 trap games to watch out for during the 2017 season.

Georgia closed the 2016 season well. They brought in a strong recruiting class. It’s almost enough to make you forget this team lost five games (including Vanderbilt) and nearly dropped two others against Nicholls State and an awful Missouri team.

Before the big South Bend trip, Georgia plays plucky App. State in the opener. The Mountaineers are coming off consecutive double-digit win seasons and they took Tennessee to overtime in 2016. They should be able to limit Georgia’s passing game and force a young team to execute and force them into passing downs.

UCLA is breaking what should be a cardinal Pac-12 travel rule. It’s easier to time zone adjust later than earlier. Do not fly east to play games that kick off at 9:00 am PT. Harken back to 2014 when a 10-win Bruin team needed three defensive touchdowns to escape, 28-20, against UVA.

The Bruins face a similar scenario here. This is a look-ahead spot before Stanford. Memphis has a prolific offense under Mike Norvell. Can the Bruins run the ball well enough to stay out of long passing downs and keep that offense off the field?

Credit some odd Cardinal scheduling for this game. Stanford heads down to SDSU for a night game. This will be their third-straight road game to open the season. The first two are a trip to Sydney and what could be a grueling road game against USC.

Stanford should be tired. It’s a letdown spot after USC. It could be a potential sandwich game if it looks like UCLA has some life. Sprinkle in some natural David Shaw offensive conservatism on the road. We’re not saying Rocky Long pulls off the outright upset, but keep an eye on that line.

Thursday night road games are one of the major traps. Iowa State showed some flashes under Matt Campbell last year. They should step forward and score an upset or two with their decent offense in 2017. This is sort of a sandwich game for Texas between USC and the Longhorns’ pivotal five-week stretch in the Big 12. Tom Herman reeled off some major upsets at Houston. But less heralded were road disappointments against inferior opponents (UConn – 2015, Navy – 2016, SMU – 2016).

Arkansas’ schedule could line them up for a nine or 10-win season without any slip-ups. Bret Bielema’s calling card in Fayetteville has been slip-ups that belie the team’s raw statistical performance.

This is Arkansas’ farthest road trip of the season. It will be hard not to look ahead to Alabama the following week, especially if the Razorbacks are 4-0 with wins over TCU and Texas A&M. South Carolina should take a step forward, even if it doesn’t show up in the W-L record with a brutal schedule.

This should be a classic sandwich for Michigan. It comes after a rivalry game against Michigan State and before a highly anticipated road trip to Penn State. Teams one might expect to drop the ball in such situations are young ones. Michigan has the fewest returning starters in FBS football.

It’s not clear what one should make of Indiana’s offense, with Mike DeBord plunging his finger into the pudding Kevin Wilson left behind. But their defense should be decent to pretty good. Indiana has played Michigan tough both times they’ve met Jim Harbaugh.

Ole Miss will be difficult to predict week to week. What we can say is this is a dangerous game for LSU. The Tigers face a backloaded schedule. This is the one point where it would look like they can take the foot off the gas. It’s after two tough games: road trip to Florida and home game against Auburn. It’s right before the bye week that leads into the Bama game.

LSU could come in on a high at 7-0. They could be reeling after bad losses. Either way, they could overlook an Ole Miss team that will have the better quarterback and will have nothing to play for but to ruin LSU’s season.

It was not easy finding a trap game on Florida State’s schedule. But this fits the mold. Even if FSU loses to Alabama, they will have rebounded against Miami and N.C. State. Louisville will either be an emotional, gratifying win after what happened last year or an utterly devastating loss.

Either way, it’s not the ideal time to fly up for a short week and potentially a cold weather night game at BC, a team that has been tricky for their ACC betters in the past. Last season was a blowout in Tallahassee, but FSU struggled with the Eagles in the three games before that.

USC’s schedule is a demanding one. Their three non-conference opponents are Western Michigan, Notre Dame, and Texas. Their bye week, during the final week of the regular season, won’t be very helpful. The Trojans should wear down and come out flat at some point.

Arizona is the 10th game in a row, following back-to-back road trips to Notre Dame and Arizona State. USC did blow out an awful Arizona team last season. But the previous nine games between these teams were each decided by one score.

Penn State plays its two most important games, Michigan and at Ohio State, in back-to-back weeks. The game immediately following will be a letdown spot, whether the Nittany Lions are heading to the Playoff or have come plummeting back to Earth. That letdown spot is a second straight road trip to East Lansing in November.

As we saw last season against Michigan and Ohio State, even bad Mark Dantonio teams can punch above their weight against the conference blue bloods. Penn State is back to being one of those teams.

Yes, Urban Meyer is 39-2 in B1G play at Ohio State. That doesn’t mean there are not a few games per year that see the Buckeyes laboring. There’s letdown potential here after the Buckeyes play Penn State the week before. Kinnick is not an easy place to visit on the road in November, as Michigan found out last season.

There’s a little bit of look-ahead potential with what tends to be a hard-fought Michigan State game on deck. Iowa and Ohio State don’t play often in the new, bloated Big Ten. But when they have in the Ferentz era, those tend to be thornier than anticipated.

Here’s a second place for Iowa State to pull off a patented upset. This game could have strong hints of 2011 when the Cowboys rolled into Jack Trice 10-0 in mid-November, lost in overtime, and cost themselves a shot at a national title.

It comes in a really perilous sandwich spot for Ole Miss. Bedlam is the week before, preceded by road trips to Texas and West Virginia. What could be a crucial conference game against Kansas State is the week following. Iowa State seems like the ideal place to take a week off.