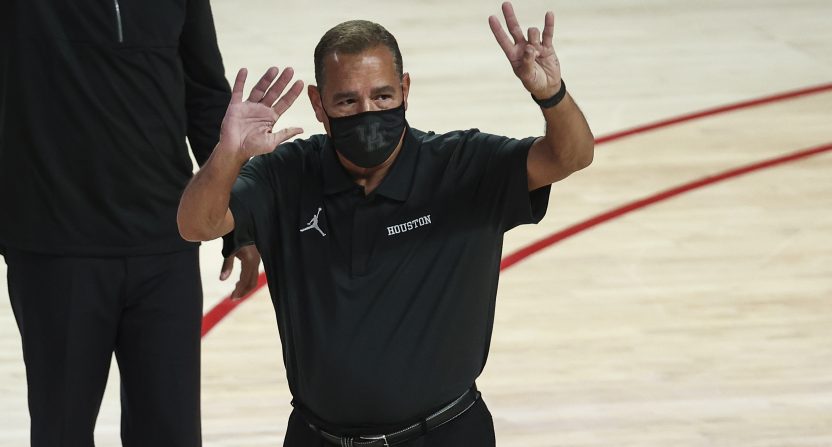 At times, Kelvin Sampson and Indiana University seem reluctantly tied to each other like a divorced couple with children.

Sampson doesn’t need to live in the past. He’s doing fine at the University of Houston. Indiana, on the other hand, is stuck in rumination. The Hoosiers are haunted by glory days so long gone that almost a generation has grown up without ever seeing the program compete for a national championship.

Instead, there’s the real possibility that the coach they used to know could win it all. Houston is two victories shy of the Final Four and four away from a NCAA title. Sampson must already feel like March Madness’ biggest winner.

His No. 2-seeded Cougars (26-3) will face No. 11 Syracuse (18-9) in the Sweet 16 on Saturday night. They have a legitimate chance to play for the title for the first time since the Phi Slama Jama squad of 1984. Houston might be the best team left in the Midwest Region in an NCAA tournament that has been rife with upsets.

Pound for pound, you’re not going to find many coaches better. Sampson has never been blessed with overwhelming talent and has spent most of his career at schools that aren’t bluebloods. With one notable exception, of course. We’ll get back to that in a moment.

No one has ever questioned Sampson’s acumen. He’s as smart as they come. However, self-inflicted wounds cut short what could have been a sensational career at Indiana. Sampson paid a heavy price. But look at him now.

Thirteen years later, Sampson is considerably better off than Indiana. He’s in the Sweet 16 for the second straight tournament. Indiana hasn’t been to the NCAA Tournament since 2016 and entered this week without a coach.

Ouch. The Hoosiers have careened down a path of irrelevance. Sampson’s rise and Indiana’s fall makes you wonder what might have been. His time in Bloomington was short – just two seasons – but memorable.

Sampson was forced out in February 2008 following accusations of NCAA recruiting violations over impermissible phone calls. Because the NCAA deemed him a serial offender, he got a five-year show-cause penalty that rendered him essentially unhirable in the college game. Sampson did his time in the penalty box by escaping to the NBA to be an assistant with the Milwaukee Bucks and later the Houston Rockets.

NCAA violations happen at a lot of schools. They are NOT supposed to happen at Indiana. Hoosiers took pride in Bob Knight and Mike Davis having success with clean programs. So, when this news hit, it hit hard, and Indiana still hasn’t fully recovered.

Indiana was rolling during the 2007-08 season. Powered by guard Eric Gordon and forward D. J. White, they were 22-4. But after Sampson left, the team went 3-4 under interim coach Dan Dakich, losing early in the Big Ten Tournament and the NCAA Tournament.

Indiana received sanctions and was placed on probation. New coach Tom Crean navigated through those obstacles and briefly brought the program back. A commendable job (three Sweet 16 appearances over a five-year stretch), but Crean was never able to satisfy IU fans who felt that his teams underachieved. Especially the 2012-13 squad with Victor Oladipo and Cody Zeller, the No. 2 and No. 4 overall picks respectively in the 2013 NBA Draft.

IU ended the Crean experience after missing out on the 2017 NCAA Tournament. They brought in Archie Miller, a move that was universally applauded. But Miller never got the Hoosiers to the NCAA Tournament and never had a winning Big Ten record. He was fired, leading to Indiana’s current predicament.

While all this was going on, Sampson was building something special in Houston. The Cougars took a chance on him in 2014. It was low risk, high reward. They got a coach motivated to change the narrative on his career. And they knew that Sampson was a winner, having succeeded at places like Washington State and Oklahoma (the 2002 Final Four).

The Houston administration was patient as Sampson slowly built the program. Over the past four seasons, Houston is 109-23 with a pair of Sweet 16 trips. It might have been three if not for a memorable buzzer-beating second-round loss to Michigan in 2018.

This Houston team is typical Sampson. Not an abundance of talent, but plenty of grit. The Cougars have only one McDonald’s All American: top scorer Quentin Grimes (18.1 points per game), who’s a Kansas transfer. They’re balanced, ranking No. 7 in offensive efficiency and 11th in defensive efficiency per Ken Pomeroy.

Last week, Sampson returned to Indiana’s Assembly Hall for the first time since 2008. His trip to Bloomington had some feeling salty. Houston rolled past Cleveland State and then rallied to beat Rutgers in Indianapolis.

“There are not a lot of teams that can play as poorly as we did and still win,” Sampson said. “But we’ve done that a lot.”

Call Sampson’s success a redemption story if you want. But it’s really as simple as this: if you have a valuable skill, you’re going to get work. Sampson is excellent at his job. The results prove it. Indiana knew this. Sampson’s Oklahoma team lost to the Hoosiers in the 2002 Final Four.

When Sampson replaced Mike Davis in 2006, Indiana figured he would be the guy to lead the program back to prominence (the Hoosiers last won the NCAA title in 1987.) Flash forward to the present: Sampson is indeed in the hunt for a national championship. But sadly for Indiana, he’s succeeding for another school.