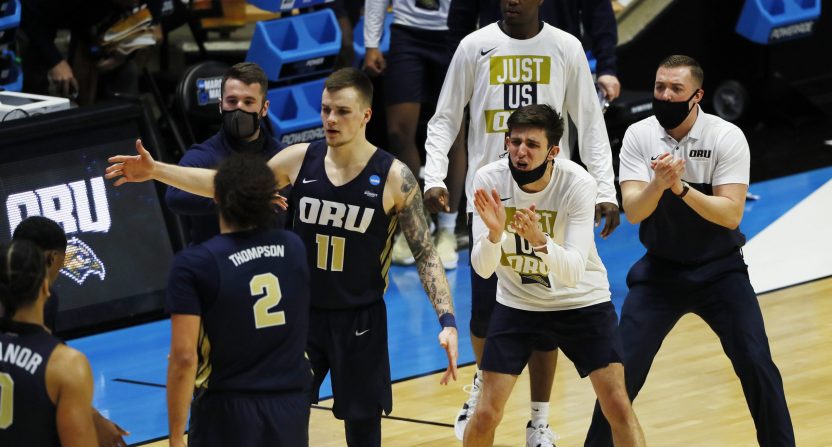 March Madness is officially in full swing as we got our first big upset of the tourney. The 15 seed Oral Roberts Golden Eagles defeated the 2 seed Ohio State Buckeyes 75-72 in overtime. It’s the ninth time in NCAA Tournament history that a 15 beat a 2 and the first time since Middle Tennessee State upset Michigan State in 2016.

Kevin Obanor and Max Abmas were the duo that really put Oral Roberts ahead. The two combined for 59 of ORU’s 75 points and were solid from three and the free throw line. A combined 10 of 22 from three and 11 of 13 from the line, they were key to the upset.

15 seed @ORUMBB is making NOISE. Max Abmas with 18pts at the half 🔥#MarchMadness pic.twitter.com/q1olIBKb5i

It wasn’t like Ohio State was struggling, they had a great game. The Buckeyes were 43 percent from the field and E.J. Liddell was a beast, getting 23 points and one colossal block.

EJ LIDDELL MET HIM AT THE RIM. @OhioStateHoops | #MarchMadness pic.twitter.com/C1OcoXT4Co

What bit Ohio State was free throws. Going 9 for 18, 50 percent from the line, that’s the opening a 15 seed can exploit. That’s just what Oral Roberts did and with Ohio State up four, the Buckeyes kept missing free throws while Oral Roberts was making them. Obanor hit four free throws in the final 1:07 to force overtime.

In OT, Oral Roberts kept up the pressure by getting layups and hitting free throws. They kept it simple and got the victory.

Now, Oral Roberts will face 7 seed Florida and while I’m sure the Gators will be breathing a sigh of relief they avoided Ohio State, Oral Roberts is no pushover. Obanor and Abmas have shown how lethal they can be as a duo and any team that can get hot from three is going to be tough. Include the unknown status of Tyree Appleby, who took an elbow to the head and was bloodied, and Oral Roberts could potentially find themselves in the Sweet 16.