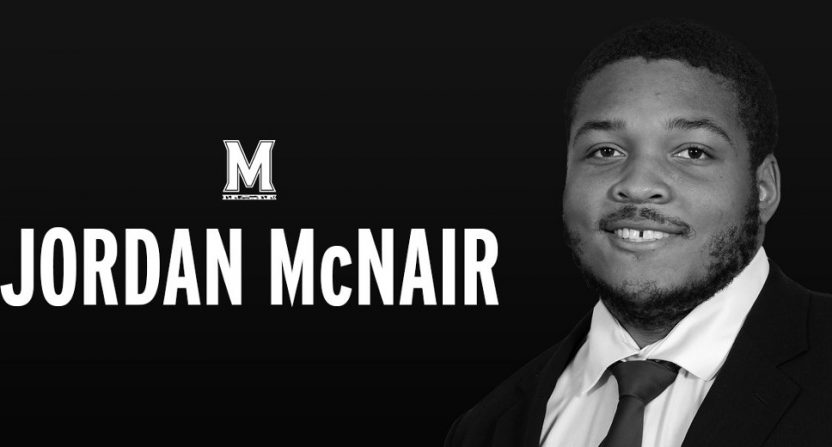 Maryland sophomore offensive lineman Jordan McNair has passed away at age 19. McNair was hospitalized following an organized team workout May 29, which the school announced June 4, saying then that he was in “critical, but stable” condition. The school then announced his death Wednesday. McNair played in one game last season as a freshman.

Today the Maryland family mourns the passing of Jordan McNair.

That letter from executive athletic director Damon Evans on Wednesday included very little information on what happened to McNair. Here’s the key part of what it does say:

We are deeply saddened by the tragic loss of one of our student-athletes, sophomore football player Jordan McNair. Jordan was a tremendous athlete, student, teammate and friend, and he will be sorely missed. We offer our deepest condolences to his parents, family and friends.

Jordan was hospitalized following an organized team workout on May 29 and passed away today, June 13. For those who had the
opportunity to know Jordan, you understand the sadness we are feeling.

Coach DJ Durkin asked me to pass along the following thoughts on his behalf:

Our team is heartbroken with the loss of Jordan McNair. Jordan was an incredible young man, and his passion and enthusiasm made him
an invaluable and beloved member of our team. Jordan was a hard worker and he always had a smile on his face. He was an extremely
talented football player and a humble and genuine human being. He embodied the essence of what it means to be a teammate. Jordan was
a fighter. Over the past few weeks, Jordan never gave up with his family, friends and team by his side. Our team will continue to be inspired
by the spirit of this brave fighter. Please continue to pray for Jordan’s family during this difficult time.

On June 5 (last Tuesday), a GoFundMe page titled “Jordan McNair’s Family Support Fund” was created on behalf of McNair’s mother, Tonya Wilson. It has raised over $25,000 of its $20,000 goal as of Wednesday afternoon. Here’s the video on the page, which talks about how McNair was “airlifted to R Adams Cowley Shock Trauma Center in Baltimore, Maryland” after the workout, how he “received a liver transplant and has been fighting for his life for the past week,” and how his family had been staying by his side.

A former Towson offensive lineman, Gavin Class, weighed in on this on Twitter. Class suffered heatstroke following a 2014 preseason practice and almost died. He received a liver transplant afterwards, and fought in court to try and get back to college football, but eventually lost, instead shifting his focus to the Transplant Games. Class tweeted last week that McNair was a “fellow heatstroke liver transplant”:

A tweet from someone from a different school isn’t proof that McNair’s issues did come from heatstroke (and even if they did, there’s a jump from that to the school being responsible or liable for his death), but there are going to be a whole lot of questions asked about the Terrapins’ workout in the wake of this situation. We’ll see what answers Maryland offers.

For now, this is a huge blow for McNair’s family and teammates, the Maryland community and the college football world. Some teammates weighed in on Twitter Wednesday, including sophomore quarterback Kasim Hill, freshman quarterback Tyler Damon DeSue, and graduated wide receiver D.J. Moore:

Lord, words cannot explain anything right now. Thank you for allowing me to know a great friend, teammate and a man who was truly a brother. Watch over us all Jordan and rest in peace, Love you forever. 🕊❤️

Rest easy brother. U were taken to soon from us but we know that your in a better place now🙏🏽😣 pic.twitter.com/KSakp734iA