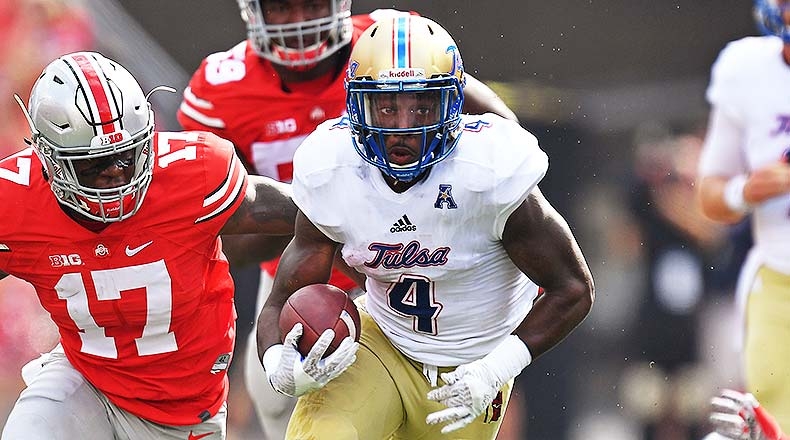 Our analysis of the American Athletic Conference will continue all week long. Today, we’ll take a look at the league’s running back situation. We’ll answer a few questions about an offensive position that seems to be getting more and more overshadowed as pass-happy offenses continue to be all the rage.

That doesn’t mean there is a lack of running back talent, and that is partially due to the depth of offensive styles still available in the AAC.

3. Braeden West, SMU: West went from 326 yards as a freshman to rushing for 1,036 yards on 202 carries in 2016. We’ve seen that a quality running game is key to what SMU head coach Chad Morris wants to do plenty in his past as Clemson’s offensive coordinator. It appears he’s found that spark in West, who should be in for around 200-225 carries again this season. Don’t be surprised to see him atop the rushing charts to end the season, thanks to his durability and his ability to scare offenses in multiple ways. He’s a great pass-catching option out of the backfield as well.

2. Ryquell Armstead, Temple: One theme you’ll notice is that this was a deep position group last season. Armstead rushed for 14 touchdowns and averaged 5.9 yards per carry for the Owls last season. However, he wasn’t the lead rusher, as senior Jahad Thomas put up 953 yards on 207 carries. Armstead will head into his junior year as the undisputed king of the castle at running back for Temple. He’ll also likely see 40-50 more carries on the season with Thomas gone. Don’t be surprised if he not only tops the 1,000-yard mark, but also contends for a conference rushing title in 2017. Armstead also happens to be less a boom-or-bust RB and should bring stability to the offense.

1. D’Angelo Brewer, Tulsa: There were six players who rushed for over 1,000 yards in the AAC last season. Brewer is one of three of those players back (USF quarterback Quinton Flowers and SMU’s West are the others). He’s also the leading returning rusher having gone for 1,435 yards last year, all while splitting time with senior running back James Flanders in the Golden Hurricane backfield. He’ll be the lead back this season and that should scare the crap out of opposing teams.

SMU’s Braeden West was already highlighted as one of the three best returning running backs in the conference. However, he’s not exactly a household name heading into 2017. But one look at his film and it is easy to see why West is our pick as the breakout running back. Simply put, the dude is electric with the ball in his hands.

He won’t line up in an I-formation and smash you in the mouth every play, but that is perfectly fine by the standards of the Mustangs offense. West is likely to go from afterthought to ESPN darling if 2016 was any indication. Put him on your radar, and if he makes a jump in pure rushing numbers in 2017, don’t be surprised to see the Mustangs going bowling.

Making matters even more interesting, Richardson managed to slip right out of Memphis’ backyard… literally. The Memphis Terzevant High School product took a winding road that included commitments to both Clemson and Maryland before landing at UCF.

The Knights turned things around quickly with the hire of Scott Frost as the head coach, adding a dangerous and explosive running back to the mix along with sophomores Jawon Hamilton and Adrian Killins, who combined for 820 yards rushing, should give this team all the firepower it needs in the backfield.

The answer would always be Navy here. After all, they only run the ball something like 99.9 percent of the time, right? Well, that’s not where we are going because the Midshipmen always plug and play well at running back and in the rushing attack in general.

Instead, I’m looking at the situation at Memphis and seeing some really intriguing options in the run game. First off, Doroland Dorceus rushed for over 800 yards on just 132 carries as a junior, meanwhile, a pair of freshmen were next on the rushing board. Patrick Taylor, Jr. and Darrell Henderson combined to put up 1,082 yards combined. Clearly, this group has some punch to it, and with a change happening at offensive coordinator, could this offense become more balanced with three talented backs?

Memphis’ ability to sustain itself as a contender in the AAC may well hinge on the production of this group.