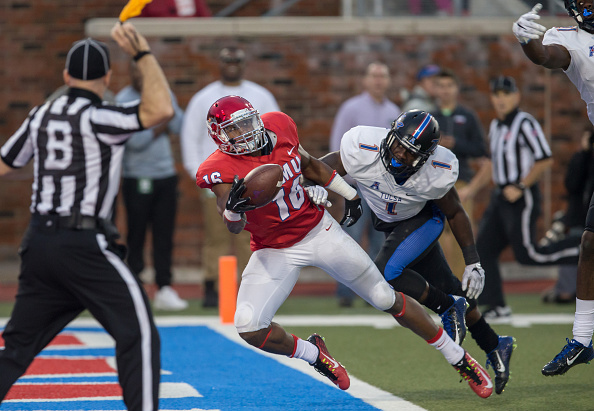 Earlier this week, we talked about the quarterbacks and running backs in the AAC. Today, I’ll take a look at the wide receivers / tight ends in the conference.

Q. Who are the top returning receivers in the AAC?

4. Linell Bonner, WR, Houston – Exactly how solid were the receivers in the AAC last year? Consider this: Bonner ranked fifth in the country in both receptions (98) and receptions per game (8.2) last season. Despite these gaudy numbers, he didn’t even earn a spot on the all-conference team (first or second team!). Yet, he was still one of the top receivers in the nation, especially on third down and less than 10, where 17 of his 20 receptions resulted in a first down. Even though the Cougars will break in a new quarterback this fall, expect him to have another 1,000-yard season.

3. Mitchell Wilcox, TE, South Florida – With all of the great receivers in the AAC, it would seem almost impossible for a tight end to crack this list. However, Wilcox was one of the most explosive players in the league last year, averaging 23.18 yards per catch. A second-team all-conference performer in 2016, Wilcox should put up even bigger numbers under new coordinator Sterlin Gilbert’s scheme this fall.

2. Anthony Miller, WR, Memphis – In terms of pure numbers, Miller might be the top returning receiver in the league. Last season, he ranked tenth nationally in receptions, ninth in receiving yards, and ninth in touchdown catches. He was playing as well as anyone at the end of the 2016-17 campaign, closing out the year with 38 catches for 510 yards and seven touchdowns over the final four games. He also had a knack for coming up with great catches, including this highlight reel grab against South Florida.

1. Courtland Sutton, WR, SMU – An all-conference performer a year ago, Sutton might have been a first-round pick if he had entered the NFL draft in April. Instead, he opted to return to SMU to build on a solid 2016 season in which he caught 76 passes for 1,246 yards and 10 touchdowns. While those numbers are impressive, pro scouts will like the fact that he raises his level of play against ranked opponents, averaging 17.63 yards per catch in six career games against top 25 foes. With another big year, he could be the first wide receiver taken in the 2018 draft.

Q. Which receiver is poised for a breakout season?

With the departures of Keevan Lucas and Josh Atkinson this fall, Tulsa needs someone to emerge as the team’s go-to receiver. I expect Justin Hobbs to be that guy. He’s been a reliable option for the Golden Hurricane over the last two seasons, catching 82 passes for 1,236 yards and six touchdowns. He also stepped up in big games last year, turning in 100-yard performances against both Houston and Navy. With strong showings like that against top competition, there’s no reason to think that he won’t eclipse the 1,000-yard barrier in 2017.

Since the league is loaded with proven talent at the receiver position, this is the toughest question to answer. With that disclaimer in mind, I’ll go with UConn’s Keyion Dixon. He seemed right at home in Rhett Lashlee’s offense in the spring game, catching five passes for 94 yards. If he can post numbers like that running the vanilla version of the offense, he should thrive once the entire scheme is installed.

Q. What is the most intriguing receiver situation?

Without question, it’s East Carolina. The Pirates have the unenviable task of replacing Zay Jones, who set an NCAA record with 158 receptions last fall. However, they welcome back Trevon Brown and Davon Grayson, who both missed the entire season due to injury. With these two key contributors from 2015 returning, it’ll be interesting to see if the ECU receivers match the type of numbers that they’ve posted over the last five years.