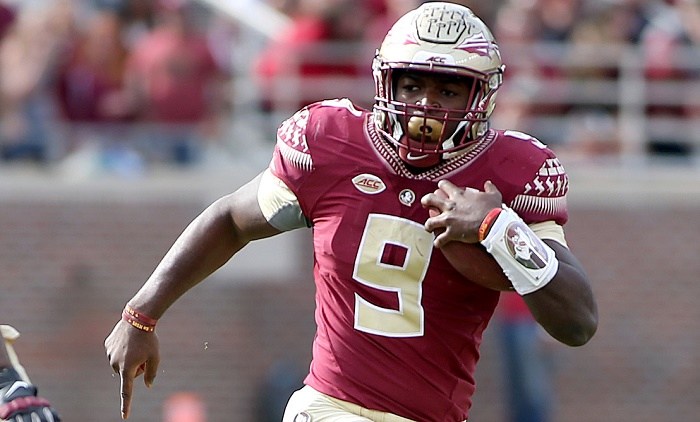 Few conferences have as storied and as deep a tradition at running back as the ACC. Okay, that may be a bit of hyperbole, but this league has become the home for some of college football’s most elite running backs and runners in recent years. That all changes in 2017, though, as most of the talent from last season is gone off to the NFL or exhausted eligibility.

Names like Dalvin Cook, Matthew Dayes, Wayne Gallman, James Connor, Elijah Hood and Taquan Mizzell are all gone (they all were top 10 running backs in the league last season). Clearly, new faces are going to rule the day in this league in 2017.

With change comes opportunity, and that seems to be the word of the year across the ACC in terms of running backs. Who will step up to the plate and which returners are of note? Let’s dive into the running backs pool in the ACC.

While Dalvin Cook was busy ripping up college football defenses last season, redshirt freshman Jacques Patrick wasn’t too shabby himself. The raw numbers don’t jump off the page necessarily, as he rushed for just 350 yards and four touchdowns. But he did that on just 61 attempts while backing up Cook, meaning he nearly averaged six yards per carry himself.

While he may be a bit unproven, when you have so many unknowns in the ACC, a good bet is on the guy who performed well while backing up an early-round NFL draft pick.

Mark Richt offenses are built on strong rushing attacks. It was his hallmark at Georgia and he’s taken that approach to Miami. Technically speaking, Walton is the second-leading returning rusher in the ACC, but he is the top returning pure running back in the league. Last season, Walton put up 1,117 yards and 14 touchdowns in his sophomore season. Can he continue the meteoric rise?

Yes, we know he’s a quarterback, but did you also know he is the leading returning rusher in the ACC this season? In fact, one could say it was his electric ability with the ball tucked and him taking off from behind the line of scrimmage that likely got him the Heisman Trophy last season. In total, Jackson went off for 1,517 yards and 21 touchdowns on the ground, while also averaging 6.0 yards per carry and just a shade over 120 yards rushing per game. With so many of the top running backs gone, could Jackson jump up and lead the league in rushing yards this season?

James Connor was a great comeback story for the ages, beating cancer and becoming one of the ACC’s best running backs in the process. He’s now off to the NFL after last season’s breakout junior year. Just like much of the conference, there are a lot of opportunities to be taken advantage of.

However, the Panthers possess one of the more intriguing young options in sophomore running back Chawntez Moss. He only took 42 carries last season and it may be a bit more of running back by committee this year for Pitt, but Moss possesses some game-changing speed. He took those 42 carries and turned them into 227 yards rushing and an average of 5.4 yards per carry. Pitt needs to have success in the run game, so expect to see a major jump from Moss this season.

He isn’t the only one to watch though, as you could easily pick out the aforementioned Jacques Patrick at Florida State and the up-and-coming Georgia Tech sophomore Dedrick Mills too. Oh, and let’s not forget about potential-laden junior Travon McMillian, who rushed for over 1,000 yards as a freshman for Virginia Tech in 2015 and took a step backward as a new offensive scheme came to Blacksburg. Let’s just say picking one player in this category wasn’t easy given all the holes that needed to be filled across the league.

Few conferences will see as many chances for young players to shine at running back as the ACC will this season. However, even fewer put together the insane recruiting class at running back that Florida State did this past offseason. All the Seminoles did was go out and get not one, but two of the top 10 running backs in the 2017 class. So, picking just one of them would be unfair.

While we already established Jacques Patrick’s credentials, it isn’t ideal to have one ball carrier racking up nearly 300 carries per season. So while Patrick is likely to start, you’re also very likely to hear the name of the 2017 recruiting class’ No. 1 ranked running back: Cam Akers. Not only was Akers the No. 1 running back in the class, he was the No. 2 ranked player in the nation according to the 247Sports composite rankings.

Things only get more interesting when you add in FSU picking up the signature of the No. 7 ranked running back in the class, Zaquandre White as well. Nothing like loading up your backfield in the last two classes in a row, huh?

This is a hard one to choose, if for no other reason than a lot of the running back situations are so unknown across the conference. No doubt the competition is going to be the most talented and fiercest at Florida State. However, there may not be a more intriguing running back situation in the ACC this offseason than what is happening at Pitt.

We’ve mentioned Chawntez Moss already, but the Panthers have a pretty loaded run game overall. There’s a hybrid wide receiver/running back by the name of Quadree Henderson in the mix, who just so happens to be the leading returning rusher with 631 yards on just 60 carries. Then you add in a pair of junior backs who looked solid in spring in Darrin Hall and Qadree Ollison, the latter of which rushed for over 1,100 yards in the absence of Connor in 2015, and things are starting to get real interesting.

Simply put, few running back groups are as deep as Pitt’s group is. Perhaps the bigger question is how to break down all the carries needed to keep everyone healthy. One has to believe one of Davis or Sibley will redshirt at the least, and perhaps both will be given the depth in front of them. Then again, few of those RB’s come in with as much recruiting hype as those two have either.