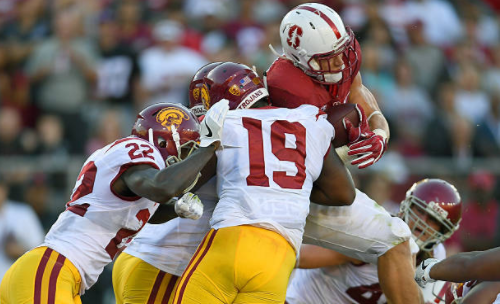 We scuffled a bit in Week 1, with our picks going 2-4. Here’s to better fortune in Week 2.

Football is about routine and rhythm. Stanford has not had a typical week yet. They traveled to Australia for a weird game in August. Then the Cardinal had a bye. Now, they hit the road again to USC. The Trojans scuffled a bit against Western Michigan.

Not noted is that Western Michigan is good. They won 13 games last season, beat two Big Ten teams, and hung with Wisconsin in the Cotton Bowl. Had P.J. Fleck returned, the Broncos would have begun the season in the Top 25. They were particularly well-placed to exploit USC. The Trojans have the better athletes and a clear advantage at quarterback. Fight on!

The raw numbers do not underpin South Carolina’s 35-28 win over N.C. State. The Wolfpack gained more than double the total yards, 415 of them through the air. Missouri has a more potent, more balanced, and more explosive offense. One can’t credit a defensive performance that resulted in an FCS team scoring 35 points in a half. But Missouri adjusted well in the second half. The problem was a few horrific breakdowns, not down-to-down incompetence. If this game turns into a shootout, Missouri should outgun the Gamecocks.

Sticking with that game from last week, N.C. State was better than the result indicated against South Carolina. The Gamecocks could not run the ball against them. Now that the Wolfpack are no longer a sleeper, it’s time to pick up some value. Marshall had no business beating Miami of Ohio. Their 31-26 win came courtesy of two kickoff return touchdowns and a pick six. N.C. State should flat out dominate this game, and it’s hard to see Marshall scoring many points.

Cincinnati underwhelmed against Austin Peay, and that 26-14 scoreline flattered them. The Governors had two drives stall out inside the Cincinnati 5-yard line. They fumbled away a third that was approaching field goal range. The Bearcats will have a brutal time making any headway against Michigan’s defense. A much more talented Florida offense managed three points.

If you weren’t impressed by Michigan’s offense, remember they were playing Florida (top 15 S&P+ defense every year since 2012). The Wolverines also left points for the taking that would have been there with crisper quarterback play and better red zone efficiency. Expect Jim Harbaugh to welcome Luke Fickell back to the head coaching ranks.

In Week 1 against New Mexico State, Arizona State looked a lot like last season’s team. They have a prolific passing game. They can’t run the ball. If their defensive aggression does not hit home, that unit gets torched. San Diego State had a Top 25 S&P+ defense last season, the best among Group of 5 schools. They should be able to score against the Sun Devils. They should be able to limit big plays the other way. It’s unclear, beyond Power 5 bias, why ASU is the favored team.

The first trick to this game is not to gloss over where it is located. This game is at South Alabama, at night, on a short week. Mobile can get a bit more humid than Stillwater. That’s a lot of points to cover as a road favorite. There’s still some reason to be concerned about the Oklahoma State defense. The scoreline against Tulsa could have been closer if the Golden Hurricane had been a bit less profligate in the red zone. The Jaguars put a few touchdowns on the board and cover.

Purdue is not back. Louisville beat them soundly. The Boilermaker offense averaged less than 4.5 yards per play and committed four turnovers. It looked closer because three Cardinal fumbles created what may have been a potential 21-point swing. Ohio obliterated Hampton 59-0 in its opener. The Bobcats are consistent under Frank Solich. They are competitive. Their one multiple-score loss last season came to Tennessee (by 9). That game was 21-19 entering the fourth quarter. See it from Purdue, before you believe it.