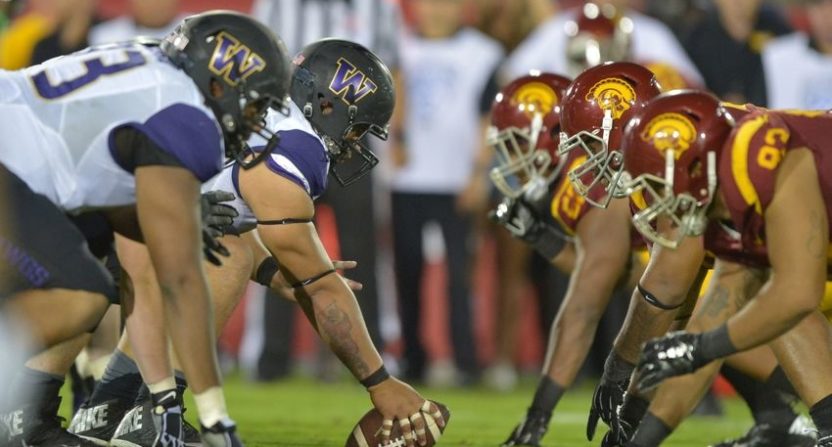 It would appear the Pac-12 North will stay true to its 2016 form for the most part. Washington is the easy favorite with five first-place votes, but Stanford is not far behind in the voting. Our staff thinks Oregon is in for a bit of a rebuilding season in the middle of the division, while Washington State could take a step back this fall. Cal and Oregon State tied for last in our preseason tabulations even after a tiebreaker was used.

Down South, the expectations for USC continue to roll in. The Trojans took four first-place votes, with Utah picking up the remaining two. As for the two schools from Arizona? It looks like it could be a long season for the Wildcats and Sun Devils.

Four different teams are being picked to win the Pac-12 by our staff this season, and there was only one Pac-12 championship game matchup predicted by more than one staff member. Washington taking down USC was picked by two of our writers, while a third writer went the opposite way in that matchup. Stanford always feels like a safe enough pick to make sense, but picking Utah to win the conference might be a bit of a bold prediction despite the Utes proving they are not to be overlooked in the Pac-12.

USC’s rising star quarterback Sam Darnold picked up a couple of votes from our staff, but Washington’s Jake Browning may have had the experience factor playing in his favor here. With all of the offseason attention being given to Darnold, it is quite possible casual fans are not even aware Browning is back for another season. But our staff is well aware, which is one of the reasons why Washington remains one of our popular favorites this season.

There was a bit more variety in our picks for defensive player of the year, but two guys picked up multiple votes from us. Washington linebacker Azeem Victor and USC’s Iman Marshall are two guys you want to have on your defense.

Four different coaches received votes for coach of the year in the Pac-12, which may help sell the point that there are some good coaches to be found in the conference. Washington’s Chris Petersen and USC’s Clay Helton each received multiple votes, but all four coaches named here are worthy of preseason consideration.

Bart: Washington will go unbeaten in 2017 and win the conference.

Yesh: Utah goes 7-2 in-conference and wins the South via head-to-head over USC, then knocks the Pac-12 out of the College Football Playoff picture by getting revenge on Washington in the Pac-12 championship game.

Matt Lichtenstader: UCLA makes the best run of anyone in the South at the Trojans. Yes, Jim Mora’s seat is ridiculously hot. Yes, it’s hard to know how good Josh Rosen is going to be after that shoulder injury. And yes, it’s hard to know how all of the coaching changes will affect the team in the end because their problems were bigger than just Josh Rosen last year. But a great and healthy QB is an X-Factor that other teams outside of Stanford really don’t have in the same way the Bruins do. They need to bounce back period, but there’s a good chance they rebound even bigger and better than some expect them to.

Kevin M.: The Pac-12 has two reputable candidates for the College Football Playoff, but is ultimately left out of the postseason fun for the second time in the brief playoff history. Although Washington wins the Pac-12 once again, they do not do so without taking a couple of damaging hits along the way that keep them too far behind the champions to come out of the ACC, Big Ten, Big 12, and SEC this season.