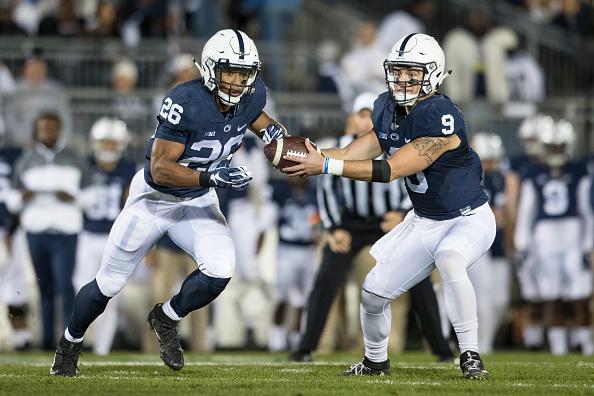 The Comeback’s college football preview coverage continues this week with our look at the top Heisman Trophy hopefuls from our featured conference of the week. This week, we highlight the Big Ten.

Even when it happens, in recent history it has most often been a quarterback/wide receiver combo. Graham Harrell and Michael Crabtree finished at Nos. 4 and 5, respectively, in 2008. 2004 was a weird year, when we saw two quarterback/running back combos make the Top 5, with Jason White and Adrian Peterson (Oklahoma) and Matt Leinart and Reggie Bush (USC) all selected as finalists. This year has a real chance to put at least one such combo in the Top 5, with two Penn State players each deserving serious Heisman consideration.

Why am I putting Barrett in this spot? One reason, and one reason only: Kevin Wilson. Barrett, as a dual-threat quarterback putting up huge stats in 2014 who missed the Big Ten Championship Game, reached fifth in Heisman voting when he was a freshman. He has never quite matched that, between splitting time with Cardale Jones in 2015 and not having such great offensive production in 2016. Wilson has been amazing developing quarterbacks at Indiana, and fans can only dream about what he’ll do with the talent he has at Ohio State. With a whole summer to work with Barrett, Wilson should have him putting up huge stats on what could be an absolutely dominant team. He doesn’t have much Heisman buzz right now based on last year, but that will come quick once it’s clear that Wilson is working wonders with a quarterback again.

The first half of Penn State’s tremendous offensive duo is running back Saquon Barkley. We knew that Barkley was one of the country’s best running backs after his freshman season in 2015, and he absolutely lived up to that billing last year. Barkley is coming back for his junior (and likely final) season, and he should be a threat to go over 1,500 yards and put up Heisman-worthy stats, especially with no Chris Godwin in the passing game.

The second half of Penn State’s duo is quarterback Trace McSorley. When looking at stats, it’s often hard to think of why McSorley is considered such an offensive power. McSorley wasn’t even named the starter until a week before the season, and didn’t quite live up to his huge billing for fully half the year. In fact, one of his worst games may have been his turning point. He went 8-for-23 for 154 yards against Ohio State, but that upset win seemed to have sparked McSorley. He never threw for under 200 yards again, and only threw two more interceptions during the regular season. His quarterback rating also skyrocketed after that, the exception being a game against Rutgers (but that’s okay, because it was against Rutgers). Even so, McSorley had a tremendous overall offense supporting him, and I think that he shines a little less without Godwin, which is why Barkley is above him on this list.

The number of Big Ten players who will come into the season with Heisman hype probably stops at the top three, but Justin Jackson deserves a ton of attention. He finished fourth in yardage last year among P5 running backs, and Dalvin Cook and Christian McCaffrey have both moved on to the NFL. Jackson has never run for under 1,000 yards, and he topped 1,500 last year. It’s always tough to know how Northwestern will do, but if the Wildcats can pull off a surprising double-digit wins and earn a Top 15 ranking, it will entirely be on Jackson’s back — which should mean some serious Heisman consideration.

I don’t think that Speight belongs on this list, but the Big Ten really only has four legitimate Heisman contenders coming into 2017 (and the fourth is a huge long shot anyway). Here’s what I do know, though. Michigan is a legitimate Playoff dark horse, at the very least, and since the team is entirely rebuilding its defense, it will be on the offense to pull this team through, especially early in the season. If Michigan is going to be a contender, it’s all on Wilton Speight. If Michigan can pull off a miracle run, Speight will get a ton of national attention, and it will be well deserved.