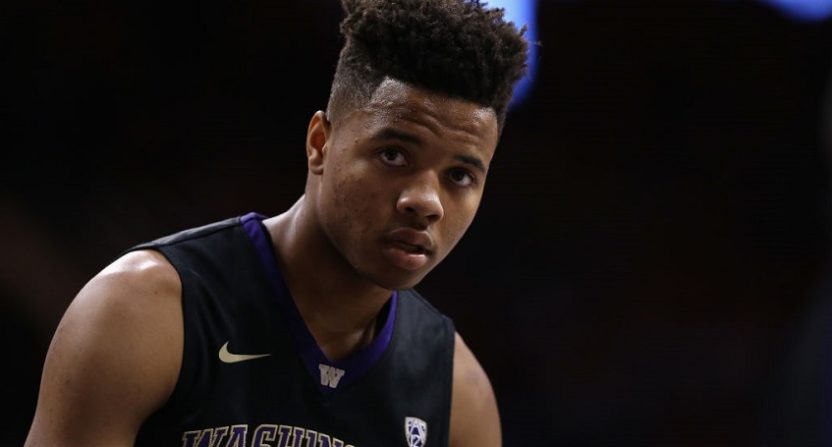 The Sacramento Kings should also be happy with the results after making the biggest jump of the night, vaulting to the No. 5 spot after their pre-lottery odds placed them at No. 8 overall.

With the 2017 NBA Draft just over a month away, we can now take a shot at predicting the outcomes for each lottery team. Which players will those 14 NBA clubs select? Even LaVar Ball might agree with these picks.

Following Isaiah Thomas’ dominant performances in the NBA Playoffs thus far, could you imagine a backcourt with him and the 6-foot-4, 195-pound Fultz? He’d slot in perfectly at either guard position, causing numerous problems for opponents with an explosive first step, as well as a sound jumper. While this pick might push Avery Bradley out of town, the fanbase should erupt in anger if general manager Danny Ainge passed on a soon-to-be superstar.

While this pick would please his father a bit too much, there’s no arguing Ball’s potential. Imagine the 6-foot-6, 190-pound guard next to D’Angelo Russell and Jordan Clarkson, potentially forming one of the elite backcourts in the league. If Russell is dealt because he’s unable to make the switch to shooting guard, the Chino Hills, California native still has tremendous playmaking ability, along with an irregular but effective shooting form (41.2 percent from three), to succeed under the spotlight.

Despite needing a spot-up shooter, like Kentucky’s Malik Monk or Duke’s Luke Kennard, Jayson Tatum’s potential is too sizable to pass up. The 6-8, 205-pound forward would provide the 76ers with an extremely lengthy lineup if Ben Simmons does indeed work out at point guard. After averaging 16.8 points per game in his lone collegiate campaign, he should provide coach Brett Brown with a No. 2 scoring option across from Joel Embiid.

Apparently, growth spurts are still a thing in college. Fox measured in two inches longer than what was marked down at Kentucky’s combine. Hence, he’s another lengthy point guard prospect who could turn out to be the best player in the draft down the road. If he bulks up, his tenacity in the lane would pair well with Devin Booker’s outside touch. However, the 6-foot-3, 187-pound guard must improve his jumper (24.6 percent from three) to sustain his value in the backcourt.

Jackson is one of the unique prospects in the draft. He exhibits a guard-like skillset (37.8 percent from three), yet the 6-foot-8, 207-pound forward also rebounds at a high rate (7.4 rpg). If he’s able to transition his style of play to the NBA, the Detroit native would fit nicely within a young nucleus of Buddy Hield, Skal Labissiere and Willie Cauley-Stein.

After finishing at No. 25 in the league in three-pointers made, the 6-foot-3, 200-pound Monk is a no-brainer. He’s unquestionably the best shooter in the draft and would hand point guard Elfrid Payton a youthful option on the wing. Plus, Evan Fournier, the Magic’s only consistent three-point threat this season, is a restricted free agent.

If the Timberwolves weren’t athletic enough in their frontcourt between Andrew Wiggins and Karl-Anthony Towns, Isaac gives them another versatile player on both ends of the floor. In his freshman campaign with the Seminoles, he notched a 50.8 percent clip from the field, along with 1.5 blocks per game. His 6-foot-10, 210-pound frame would give Wiggins and Towns plenty of space to create, too.

With Derrick Rose’s health up in the air, Smith provides the Knicks with another building block alongside Kristaps Porzingis. His numbers in ACC play reeked of inconsistency, but the 6-foot-3, 195-pound guard’s raw ability to score and distribute is evident. Similar to Fultz, he’s tremendous in one-on-one situations.

Primed to become the next great European guard in the league, Ntilikina stands apart from the rest of his peers. For one, the 6-foot-5, 170-pound guard’s length is evident around the rim on each side of the floor. He also turned in a 58.6 percent clip from the perimeter in the FIBA U18 European Championships in December. With shooters like Wesley Matthews and Seth Curry surrounding him, Ntilikina would be primed for success from the get-go.

Sacramento would be foolish to pass on the 7-foot, 230-pound Markkanen, especially with the chance to add another shooter (42.3 percent from three) to the lineup. Although he’s not a traditional big man, as he’ll need to advance his game in the paint, the Finland native is another raw prospect with plenty of upside. Walking away with Jackson and Markkanen would be an absolute steal for general manager Vlade Divac.

Considering the Hornets finished at No. 20 in rebounding differential (minus-.8), the 7-0, 230-pound Collins should give them plenty of help. He averaged a whopping 13.2 rebounds per 40 minutes as a freshman, along with 23.2 points in that department. If Frank Kaminsky starts to stretch the floor at a higher rate (32.8 percent from three) as well, the two would develop into a rock-solid combo.

Two years ago, the Pistons passed on Justise Winslow in favor of Stanley Johnson. The latter went on to average 4.4 points per game with a 35.3 percent clip from the field in his 2016-17 campaign. Hopefully, they won’t miss out on a premier prospect this time around. Jackson posted 18.3 points per contest in his junior season, along with shooting a career-high 37 percent from downtown. The aforementioned Kennard could end up having J.J. Redick-like success, but Jackson adds so much scoring value beyond his improved three-point shot.

While his numbers (12.9 ppg) fell off a bit after point guard Maurice Watson Jr. suffered a torn ACL, the 7-0, 230-pound Patton boasts an abundance of upside. His unparalleled athleticism was consistently showcased around the rim, and he’d be a solid option next to Nikola Jokic if his mid-range jumper and passing skills weave together. He even displayed a 7-3 wingspan at the NBA Draft Combine.

The 6-foot-10, 235-pound Collins evolved into a star down the stretch for the Demon Deacons, averaging 22.7 points per game over his final 16 contests at Wake Forest. Moreover, he was ultra-efficient down-low, notching a 74.7 field goal percentage around the rim. With Chris Bosh most likely departing Miami, Collins represents an ideal replacement.