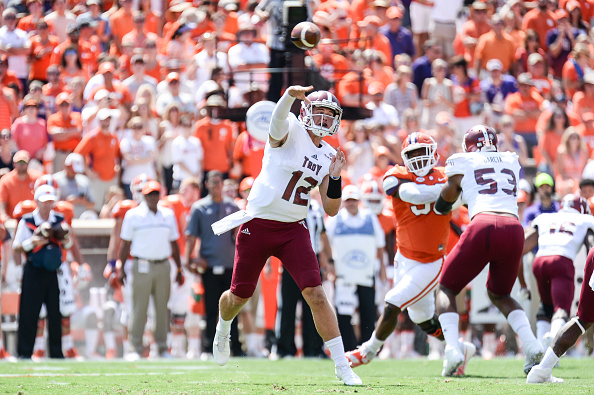 With the 2017 college football season right around the corner, our conference position previews are almost complete. The Comeback’s college football preview is focused on the Sun Belt this week, so I’ll take a look at the conference’s quarterbacks.

Q. Who are the top returning quarterbacks in the Sun Belt Conference?

3. Taylor Lamb, Appalachian State – A model of consistency, Lamb has been one of the better quarterbacks in the league over the last three seasons. During that span, he has completed 60.6% of his passes for 7,026 yards with a respectable 63/26 TD-to-INT ratio. He’s also done a great job as a runner, rushing for 1,424 yards (5.7 ypc) and 18 touchdowns. As a result of these stellar stats and his excellent decision-making, Appalachian State is 20-4 in Sun Belt play with Lamb under center. Expect him to post solid numbers for a fourth straight season, and to have the team in contention for the conference championship again in 2017.

2. Matt Linehan, Idaho – Linehan was a huge reason why the Vandals improved from 4-7 to 9-4 last year. He played extremely well on the road last season, throwing for 2,057 yards and nine touchdowns, while completing 62.6% of his passes. He also ended the year as one of the hottest players in college football, connecting on 36 of 50 passes (72%) for 507 yards and seven touchdowns in the final two games of the season. Although Idaho will have to find some new starters on offense this fall, there’s no reason to think that Linehan won’t crack the 3,000-yard barrier again in 2017.

1. Brandon Silvers, Troy — Silvers was the top quarterback in the league last year, earning first-team All-Sun Belt honors. He has had a great career at Troy, throwing for 7,387 yards and completing 64.6% of his passes. He was especially impressive in the fourth quarter last season, connecting on 53 of 79 passes (67.1%) with five touchdowns. With eight starters returning from a squad that ranked second in the conference in total offense last year, look for Silvers to have another huge season in 2017.

Q. Which quarterback will have a breakout season?

Although there are a number of players that will be better this fall than they were a year ago, I’ll go with Arkansas State’s Justice Hansen. He had a solid freshman season for the Red Wolves, throwing for 2,719 yards with an impressive 19/8 TD-to-INT ratio. He also made some great plays that don’t show up in the stat sheets, such as an 18-yard scramble on fourth-and-16 against Georgia Southern to keep the eventual game-winning drive alive. Since college quarterbacks typically show the most improvement between year one and year two, I can’t wait to see what he’ll do for an encore in 2017.

Even though Texas State coach Everett Withers hasn’t named him as the starting quarterback yet, I’m keeping an eye on Mississippi State transfer Damian Williams. He played well when given the opportunity in Starkville, completing 45 of 70 passes for 427 yards and five touchdowns over the past two seasons. That number includes a solid performance off the bench against South Alabama last year, where he completed 20 of 28 passes for 143 yards, while adding another 93 yards on the ground.

Williams also had a great showing in the spring game, scoring four touchdowns and throwing for 172 yards. With numbers like that, it’s hard to see him not winning the starting job and having a big senior season.

Q. What is the most intriguing situation at quarterback?

Without question, it’s at Coastal Carolina. After all, the Chanticleers played six different quarterbacks last season, and actually lost a seventh – the projected starter for the 2016 – during fall camp. This year, six of these players return, with Syracuse transfer Austin Wilson joining the mix. While this competition is intriguing in and of itself, it’s also worth noting that head coach Joe Moglia will take a medical leave of absence this season.

Will offensive coordinator and interim head coach Jamey Chadwell stick with the pass-first attack that the team wanted to use last year or will he go with a ground-based attack that worked so well at Charleston Southern?

There are strong arguments on both sides, which is why I’ll just say that I can’t wait to watch it all unfold on the gridiron.