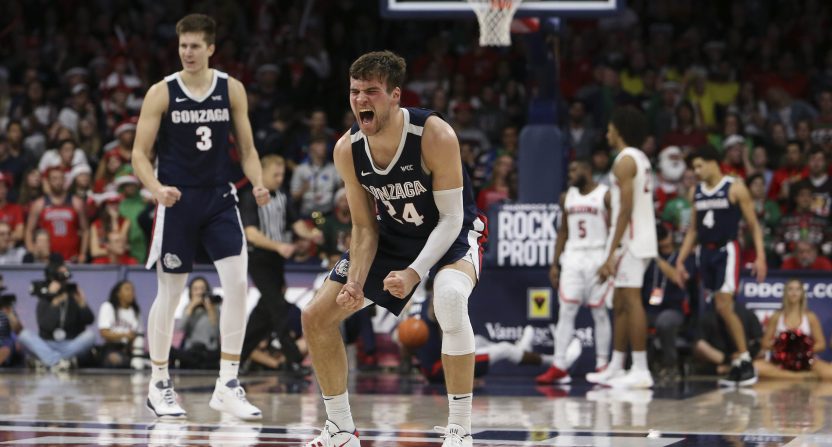 Gonzaga University is No.1. For how long? Who knows, but we can feel reasonably assured that it will remain the top-ranked college basketball team for at least a week. The Bulldogs (13-1) don’t play again until Dec. 30 at home against Detroit Mercy.

Welcome to the season of living dangerously. When then-No.1 Kansas fell at then-No. 18 Villanova 56–55 last weekend, the Jayhawks became the fifth No.1 team to lose this season- the most such losses in a single season in the Associated Press poll era. Gonzaga is the sixth different team to occupy the No. 1 ranking. The record is seven, set in 1982-83.

Perhaps No. 1 should be officially listed as “vacant,” “TBA,” or the shrug emoji: “¯\_(ツ)_/¯”. Call it parity if you want. Call it confusing if you prefer. Is anyone any good and does it matter? Where are the dominant teams? Where are the superstars? Sure, there has been a lot of turnover due to players leaving early for the NBA and transferring. But both of those things have been happening for a while now. There is no one-size-fits-all explanation for the volatility.

Weird stuff is happening and we’re not quite sure why.

Michigan State, the preseason No. 1, was supposed to give Tom Izzo his best chance at a second national championship. The Spartans already has three losses. They fell to Kentucky in their season opener. Then top-ranked Kentucky was stunned at home by Evansville. Duke was shocked at home in overtime by Stephen F. Austin. Your turn, Louisville. The Cards were knocked out of the top spot by Texas Tech. The next up was Kansas which was bounced by Villanova.

We haven’t seen anything like this in almost four decades. Back in 1982-83, Houston, Indiana, Memphis, UNLV, North Carolina, UCLA, and Virginia all took turns at No. 1. None of them won the title. That was the season of Jim Valvano’s North Carolina State team – the ultimate poster boy for an unlikely national championship. That squad was a No. 6 seed that needed to win their conference tournament just to get into the 52-team field.

How long can Gonzaga hang on to No. 1? Possibly for a while. A favorable schedule helps. According to college basketball statistical analyst Ken Pomeroy, the Bulldogs have at least an 80% chance to win each of their next 11 games. They might not be challenged until a Feb. 8 trip to Saint Mary’s where they only have a 54%-shot at winning.

Gonzaga has the nation’s longest active home winning streak (30 straight) and have won 11 consecutive true road games, including at Washington and Arizona this season. Pomeroy predicts that Gonzaga will run the table for the rest of the regular season. However, given college basketball’s unpredictability, that seems unlikely.

“I don’t think they should be doing polls this year until March,” Gonzaga coach Mark Few said. “I’m serious, I mean, it’s just an effort in futility at this point.”

College basketball is suffering from a lack of star power. There is no Zion Williamson or Ja Morant. They’re both collecting paychecks in the NBA. The two most recognizable names and faces in the college ranks aren’t currently active. Memphis’ James Wiseman had been sitting out due an NCAA extra benefits suspension. He has left school to prepare for the NBA draft where could be the No. 1 overall pick. And ultra-talented North Carolina point guard Cole Anthony has been sidelined by a partially torn meniscus.

Gonzaga is legit. The Bulldogs’ lone loss came to Michigan in the championship game of the Battle 4 Atlantis. But they’re a starless team. Gonzaga lost their four top scorers from last year, including two NBA draft picks: forward Rui Hachimura (ninth overall) and Brandon Clarke (21st overall). The current Bulldogs have six players averaging in double figures, led by Filip Petrusev (16.7), a 6-foot-11 Serbian sophomore forward. He wasn’t among the preseason all-conference players for the West Coast Conference. In fact, the only Gonzaga representative was senior forward Killian Tillie.

Could all this uncertainty mean that we’re in for a wild NCAA tournament? Perhaps. The gap between the tops seeds and bottom ones has been steadily shrinking. But predicting anything in this college basketball season of unpredictability seems silly.