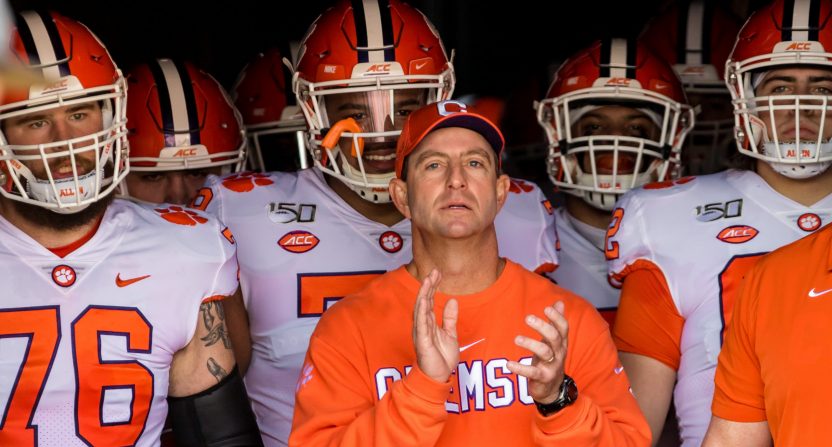 Friday’s wave of positive COVID-19 test results in sports has continued, this time with the Clemson Tigers football team. The school announced Friday that their athletics department has seen 28 positive COVID-19 tests overall, with 25 of those new since the three they announced last week. And a lot of those are in football, as Matt Connolly writes at The State (a daily newspaper based in Columbia, SC):

On the same day that the state of South Carolina announced its highest number of coronavirus cases yet with 1,081, the Clemson athletics department announced that 25 additional people have tested positive for the coronavirus.

Clemson Athletics student-athletes and staff have completed 315 tests for COVID-19 this month, and 28 of those have come back positive. The school announced 25 new cases on Friday after three were announced last week.

The number includes 23 football players, two members of Clemson’s football staff and three student-athletes from other sports, according to a school spokesperson.

While there have been plenty of positive tests with other NCAA football programs as well, including Texas, Houston, Alabama, Kansas State and more, this looks like the largest NCAA football number to date. FBS football allows for a maximum of 85 players receiving athletic-based aid, and for 105 players to be rostered before the first day of class or the first game. So 23 players on the Clemson team with positive tests represents 27 percent of the scholarship limit and 21.9 percent of the roster before the first game (rosters can expand after that, and most do).

That’s a pretty massive amount, and it poses big questions for Clemson and other college football programs trying to return this fall. And as Grace Raynor noted at The Athletic, Clemson’s current policy is that “Voluntary workouts will not be shut down.” We’ve already seen that step at programs with less confirmed cases, including Houston, so it’s notable that Clemson isn’t going to that level of response yet.

This is also notable given Clemson’s prominence. They’ve won the last five ACC titles, they won national championships in 2016 and 2018, and they made it to last year’s championship game. So seeing those numbers of positive tests at a program at that level is certainly notable. And it raises questions about NCAA football’s plans to return this fall.