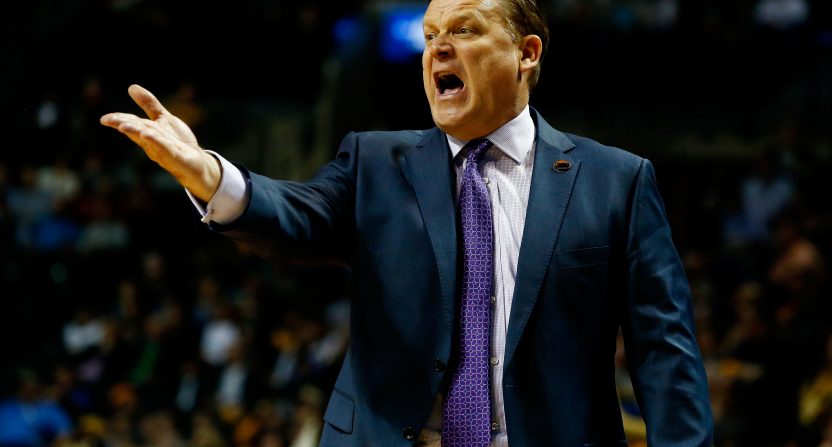 The Illinois basketball program has long felt like somewhat of a sleeping giant.

Illinois is a large state school in the Big Ten, not far from the high school basketball mecca of Chicago. There’s some history of success, and there seems to be buy-in from the administration. All that’s been missing in recent years—so it seems, at least—is the right coach.

Underwood’s hiring comes as somewhat of a shock. He had been in Stillwater for only a year, and Illinois is not far and away a better program than Oklahoma State. From a basketball standpoint, there was no obvious reason for him to bolt.

That said, Underwood made only $1 million last season with the Cowboys, so he figures to be in for a raise in Champaign. (It’s worth noting the hypocrisy of coaches bailing for new jobs and more money after a single season while players who wish to transfer need to sit out a season).

The reaction to this news has been, as you might expect, received very differently among the Illinois and Oklahoma State fanbases.

For the Illini, this seems like a coup. Underwood is one of the top young coaches in the country, having transformed Oklahoma State from a 12-20 Big 12 bottom dweller to a 20-13 NCAA Tournament team.

Illinois went from John Groce and Tim Beckman to Brad Underwood and Lovie Smith. Think about that for a minute.

I am happy. I am very happy. https://t.co/xJyCnpJyQM

Correction: To all UI recruits: Brad Underwood ran the most efficient offense in the country THIS year, all while playing an uptempo style

Underwood to Illini will be very appealing to Chicago city talent. Come to Illinois, we will play fast and allow you to score. A LOT.

To Oklahoma State, on the other hand, Underwood’s departure is borderline traitorous. It’s also a sign that Stillwater is not a desirable destination for top coaching talent.

So…. When's the bonfire for the "Underwood 2016" shirts the athletic department handed out last year?@GentsOkstate @OKStateProbs

Lotta questions for Mike Holder. One thing if Underwood left for a blueblood… but for Illinois??

How the crap did Holder let Underwood get away. #fail #okstate

Underwood doesn’t have an easy job ahead of him at Illinois. The Illini haven’t made the NCAA Tournament since 2013 and are losing the top three scorers from this year’s team.

But Underwood has shown an ability to turn around a program quickly. It’s probably his old program, not his new one, that should be sweating.