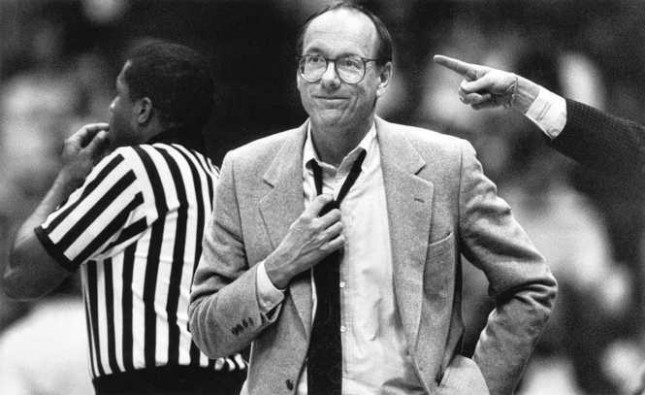 The 1991 NCAA Tournament was noteworthy for three overarching reasons:

1) Before a single game began, this became CBS’s first wall-to-wall tournament. Black Rock finally picked up all of the first round. That was a big deal at a time when cable had not saturated the market to the extent it does today.

2) When the tournament ended, it became remembered more than anything else for the Duke-UNLV Final Four semifinal. The 79-77 win by the Blue Devils propelled Mike Krzyzewski to his first national title, launching his career, while destroying UNLV’s dream of becoming the first unbeaten national champion since Indiana in 1976.

3) The 1991 NCAA Tournament featured several other major storylines — Roy Williams made his first Final Four, Dean Smith returned after a nine-year absence and Jim Nantz called his first Final Four for CBS, replacing Brent Musburger. Yet the headliner which overshadowed those large developments was that for the first time since the Dance’s expansion to 64 teams in 1985, a 15 seed defeated a 2 seed.

In the subsequent 24 NCAA tournaments, six other 15s have gone wild against “deuces.” Florida Gulf Coast was the most recent conqueror in 2013 against Georgetown. Norfolk State defeated Missouri and Lehigh toppled Duke the year before.

However, as the college basketball world waits for the first 16 seed to create an all-time March Madness moment, the trail blazer for all the little guys was none of the teams listed above. 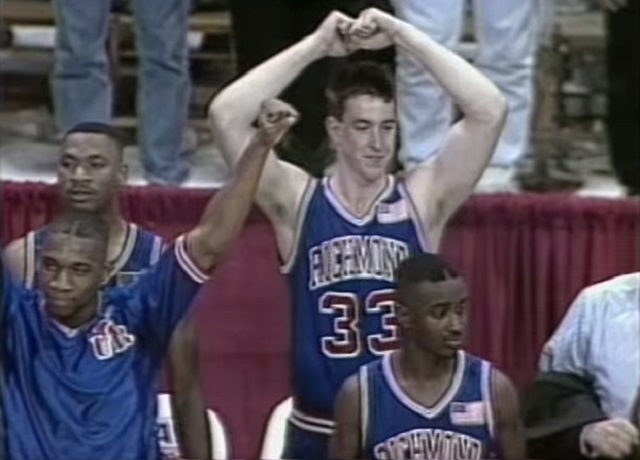 On March 14, 1991, the Richmond Spiders and coach Dick Tarrant weren’t new to the NCAA tournament stage. Moreover, Tarrant and his itsy-bitsy 15 seed were a lot more formidable than many casual sports fans might have realized.

Before the 1980 NCAA Tournament, a 12 seed never existed, because the field hadn’t yet expanded to 48 teams (and it had been seeded in a clean numerical manner for only one year at the time). In 1984, a 53-team tournament in the final year before the move to 64, Richmond was a 12 seed. Tarrant’s team took a bite out of Charles Barkley and fifth-seeded Auburn. The legend of Richmond as an NCAA first-round giant killer began back then.

In 1988, Richmond didn’t merely orchestrate a 13-over-4 upset; Tarrant’s Spiders caught defending national champion Indiana in their web of excellence. Two days later, Richmond became the first 13 seed to make the Sweet 16 when it defeated Bobby Cremins and Georgia Tech.

Tarrant knew how to bust a bracket. Nevertheless, after the first six 64-team NCAA tournaments (1985-1990), not a single 15 seed had been able to go where no team had gone before. That same pervasive feeling currently attached to 16 seeds versus top seeds — “When will it ever happen?” — pervaded college basketball.

Then came Tarrant and Richmond, weaving a spell which broke the seal and opened the door for other 15 seeds.

You can relive the final minutes here:

The game resonated and rippled throughout the college basketball world. Precisely at the time when CBS carried the first round, this game received more exposure than it otherwise would have. The Sporting News‘ Ryan Fagan explained the circumstances in this remembrance of Richmond’s win and other 15-over-2 upsets:

“As Richmond built a 10-point lead through the second half, the country started paying attention. With lots of one-sided blowouts in the other games, CBS shifted its late-night audience to this upset in the making. Of course, Tarrant and his players had no idea this was happening—until CBS announcer Verne Lundquist spilled the secret after the final buzzer, that is.

‘He said that by the end of the game, we think we had 25 million viewers,’ Tarrant recalls with a laugh. ‘I said, ‘My God, if my guys knew that, they might have run off to the john with diarrhea.’ “

Looking back on this game, many years later, the fact that this was a first-of-its-kind event might weigh heavily on history’s assessment of Syracuse coach Jim Boeheim. After all, Boeheim has been coaching at Syracuse for 40 years now. A total of four Final Fours is hardly anything to sneeze at, especially when one considers that other iconic coaches with similarly long tenures — think Ray Meyer at DePaul (1942-1984) — made only two. Two other contemporaries Boeheim has outlasted, John Chaney of Temple (24 seasons) and Gene Keady of Purdue (25 seasons), didn’t make a single Final Four in 49 combined seasons. Four Final Fours is still all right.

Yet, in 40 years of coaching, reaching four Final Fours means 36 seasons without one. Boeheim’s tenure — in many ways, beginning with this loss in 1991 — collected a lot of disappointments. They can, on the surface, create the impression of underachievement, and to some extent, such a criticism isn’t entirely lacking in truth. However, the first of the 15-2 upsets made it ever more apparent that if you coach long enough in the business — and follow it over a long-enough period of time — even the best coaches are going to lose some stinging upsets. A career is much more than one game or a handful of gut-punch upset losses.

Other coaches to suffer 15-2 upsets include not-that-great coaches such as Frank Haith (Missouri, 2012) and John Thompson III (Georgetown, 2013). Eddie Fogler (South Carolina, 1997) was a very good coach who — in many ways — never quite recovered from his own 15-2 upset loss. In fact, Richmond — as a 14 seed coached by John Beilein — beat Fogler’s third-seeded South Carolina team the very next year.

Yet, for all the coaches who never quite struck gold in their careers, partly due to a 15-2 upset loss, other coaches made it big.

Boeheim is one. Lute Olson of Arizona also lost to a 15 seed. So did this other guy, Mike Krzyzewski of Duke to Lehigh four years ago. 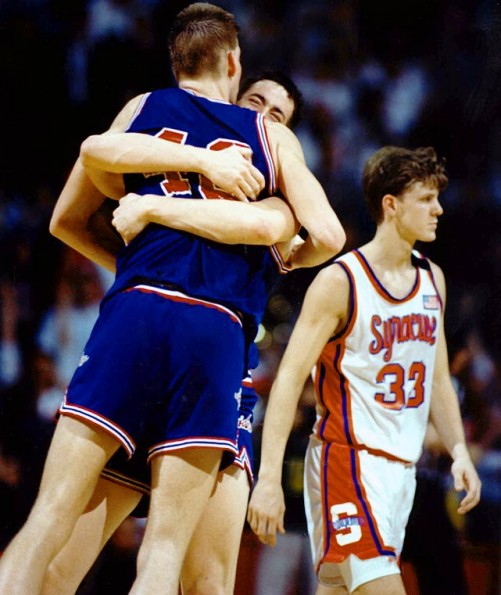 Richmond — already practiced in the art of the NCAA tournament upset — simply created its best work against Syracuse 25 years ago. Dick Tarrant knew what he wanted to do, and his players were good enough to put a plan into action and sustain it, just as six other 15 seeds have done in subsequent years.

What makes Richmond’s conquest even more special, though, is that while it certainly paved the way for other teams, it hasn’t exactly led to a steady stream of 15-2 upsets. They happen, but for 10 straight NCAA tournaments (2002-2011), not one did. There have been 20 upsets involving a 14 seed beating a 3, but only seven with a 15 beating a 2. The 15-2 upset has that special dual quality: It happens enough that you notice it, but not enough that you accept it as being commonplace. The 14-3 upset is so much more a part of the NCAA tournament’s bloodstream. The 15-2 upset is still an especially rare event.

This is why the first 16-1 upset — if it happens, or perhaps, WHEN it happens — will become that much more iconic a moment in college basketball history.

Richmond’s Spiders — coached by a man whose last name sounds a lot like “tarantula” — didn’t merely defeat a powerhouse program and a Hall of Fame coach 25 years ago. They defeated the idea that something daunting could never, ever be done.

The four 16 seeds taking the court this Thursday or Friday can look to Dick Tarrant and Richmond for a little inspiration this week.