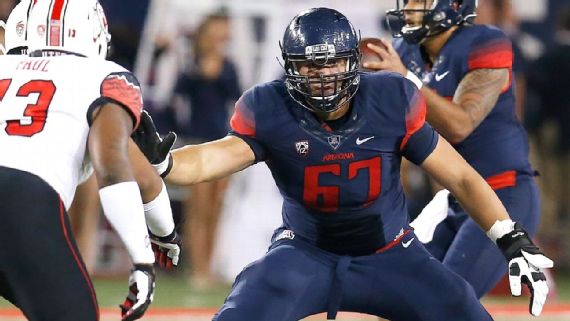 The Arizona Wildcats are reluctant to use a player who head coach Rich Rodriguez has said “might be the best punter on our team” because of “the optics of it.” That’s because that player, senior offensive lineman Gerhard de Beer, happens to be 320 pounds.

That’s part of a longer story from ESPN’s Kyle Bonagura about how de Beer, a top discus thrower from South Africa who’s done well for the Wildcats in track and field, wound up walking on in football and eventually found success on the line after stints at different positions, but it’s a particularly fascinating part.

In the four years since, de Beer has far exceeded everyone’s initial expectations. He has developed into a reliable offensive tackle for the Wildcats and sparked intrigue from some NFL scouts, who have expressed interest to Rodriguez because of how far he has come in such a relatively short amount of time. De Beer has started five games at right tackle this year for a team that has gone 6-2 and debuted at No. 23 in the initial College Football Playoff rankings.

But Rodriguez insists de Beer’s best position might actually be one that he has never played in a game: punter.

“I’m serious. He might be the best punter on our team,” Rodriguez said. “He can bang it now. When he punts it, you can hear the difference. You don’t have to see it to know.”

The main reason de Beer hasn’t been given the opportunity to punt in a game yet is the optics of it. As awkward as a 6-7 offensive lineman in short shorts can be, for Rodriguez, having a 320-pound punter just doesn’t look right, but he has slowly warmed to the idea — de Beer has begged for a chance — and says eventually it could happen in a game.

“The first time I punted in practice, they got me some fancy shoes and I hit a 75-yarder with a five-second hang time,” de Beer said. “The [special teams] coordinator said, ‘Welcome to the program,’ but I didn’t understand what that meant.”

Look, there’s all sorts of reasons why the Wildcats might not want de Beer as their regular punter. Power is one thing, but punting is also about consistency and location, and they may have more faith in their regular punter who practices that more. de Beer obviously has to do a lot of work and preparation to play right tackle, too, and they may not want his focus distracted from that. But arguing that having a big punter “just doesn’t look right” feels silly, and feels like a missed opportunity for the Wildcats.

Regardless of if he gets to punt or not, though, the future seems bright for de Beer. NFL scouts have shown some interest in him considering how far he’s come after adopting football very late (he had to even get a teammate to tell him how to put his pads on initially), and he seems like the type of prospect a team might take a flier on.

And if football doesn’t work out, there’s always discus; he finished fourth at the 2016 NCAA championships, his 61.97 mark at the Tucson Elite Championships would have won gold in the African Championships that year, and Arizona throwers coach T.J. Crater told Bonagura he believes de Beers could hit the Olympic standard if he consistently trained for discus.

But still, it would be great to see de Beer get to punt in a game, and hopefully he’ll get the chance. (Perhaps even when his parents come from South Africa to watch the Wildcats’ final two regular-season games.) And if he doesn’t, hopefully it will be for a better reason than just “optics.” From this corner, the optics of a 320-pound punter who can do the job better than anyone else are a feature, not a bug.