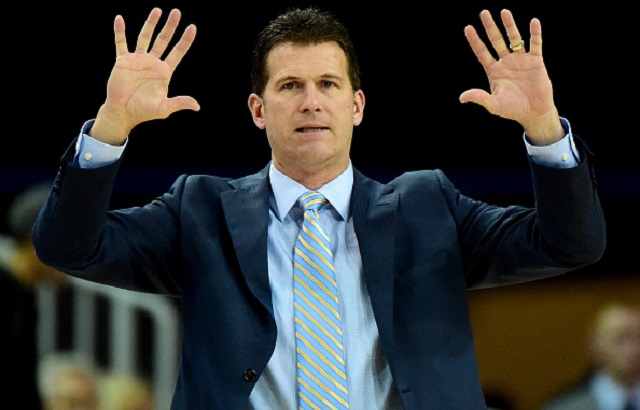 The college basketball season is almost here. The 2016-17 road to the Final Four in Arizona begins next Friday, Nov. 11.

Unfortunately, a new season means that some coaches will fail to meet expectations and lose their jobs. Several will be on the hot seat and coaching for their jobs in 2016-17. Here are five coaches who could use an NCAA tournament appearance (and maybe more) to lighten the pressure.

Hot seat level as described by a musical artist: “Hot in Herre” by Nelly

Preseason prediction: Third out of 12 teams.

The lowdown: For most of his career, Steve Alford was an odd/surprise choice by the Bruins — a move that prompted immediate backlash for both on-the-court and off-the-court reasons. Yes, Alford did a good job at New Mexico. He was also mediocre at Iowa. So, Alford’s struggles at one of the most prestigious jobs in the sport shocks no one. Last season was so bad (15-17) that Alford apologized to fans and returned money to the school.

At certain programs, you have to make the NCAA tournament every season. And if you don’t in back-to-back years, that’s a death blow. If the Bruins don’t get to the tournament this season, it would be the first time they missed out on the tournament consecutively since the 1984-85, 1985-86 seasons.

Steve Alford on returning extension: "I wanted our players to know there are consequences for coaches when they don't do well."

Reasons to search StubHub for tournament tickets: Recruiting. UCLA has one of the best incoming classes in the nation. Guard Lonzo Ball is already drawing comparisons to Jason Kidd. Fellow freshman, center Ike Anigbogu will miss the early part of the season after knee surgery due to a right meniscus tear. But he wasn’t expected to start. And UCLA has another stud freshman in forward T.J. Leaf.

Reasons to start a GoFundMe page for the buyout: If the freshmen don’t live up to the hype, particularly Ball. UCLA needs to get off to a good start. The Bruins don’t have any truly tough games until December when they visit Kentucky and Pac-10 favorite Oregon.

Preseason prediction: 12th out of 14 teams.

The lowdown: Let me get this straight. Minnesota fires Tubby Smith who was 124-81 in six seasons and led the Golden Gophers to three NCAA tournament appearances, including one his final season in 2012-13.

Minnesota hires Richard Pitino whose résumé consisted of one 18-14 season at FIU with the Golden Panthers reaching the Sun Belt Conference title game. That’s pretty thin. If his last name was “Johnson,” would Pitino have gotten a major conference job at the age of 30? Minnesota won the NIT in his first season but has gotten progressively worse, bottoming out at 8-23 last year.

Pitino has received more attention for his off-the-court troubles. He’s overspending on travel, had players suspended for sex videos, and had a player arrested for assault. Pitino might have been fired after last season if not for a $7.1 buyout.

Richard Pitino says Minnesota's disciplinary issues a year ago made him a better coach and "everybody learned from it."

Reasons to search StubHub for tournament tickets: Well, it probably can’t get any worse. After serving their suspension, guards Nate Mason and Dupree McBrayer will return. The Gophers will also add freshman forward Amir Coffey, the most highly-touted in-state recruit since Kris Humphries in 2003. Illinois State transfer Reggie Lynch is also expected to bolster the frontcourt.

Reasons to start a GoFundMe page for the buyout: If the program endures another embarrassing moment, that might be the tipping point to jettison Pitino. Unlike his father, he doesn’t have the goodwill and enough success to survive. It’s going to be difficult for Pitino to keep his job.

Hot seat level as described by a musical artist: “Drop It Like It’s Hot” by Snoop Dogg with Pharrell

Preseason prediction: 12th out of 14 teams.

The lowdown: Not even Johnny Jones can believe he’s still at LSU. In today’s microwave climate, at a school that actually cared about basketball, Jones would have booted last spring. You can’t have the No.1 overall draft pick — Ben Simmons — and not make the NCAA tournament. Jones acknowledged that buck stops with him by saying, “I’m the head basketball coach. At the end of the day, all that falls on my shoulder.”

Criticism of Jones goes beyond this season. When you look at his 16-year career, he’s made the NCAAs three times with no victories. If LSU is serious about having a quality basketball program, it could upgrade at coach. After all, this is that same school that fired a national championship football coach in midseason.

Need hope today?
Johnny Jones is the LSU coach despite missing the NCAA Tournament with #1 draft pick.
You can fail & still get paid.

Reasons to search StubHub for tournament tickets: Perhaps the other key members of LSU’s 2015 recruiting class will shine with Simmons gone. Sophomore guards Antonio Blakeney and Brandon Sampson will need to be better. Blakeney was named a second-team All-SEC preseason pick, but must find his three-point shot. Sampson was strictly a role player, starting only five games.

Reasons to start a GoFundMe page for the buyout: If the key players continue to under-perform. If the defense doesn’t tighten up (LSU was 272th in the nation in field goal percentage allowed at 45.3). If they continue to be terrible away from home (4-11 last year).

Hot seat level as described by a musical artist: “Here Comes The Hotstepper” by Ini Kamoze

The lowdown: When Illinois brought in Groce, it appeared to be a solid decision. He coached Ohio to a pair of NCAA appearances in his four years, including a surprise berth in the 2012 NCAA Sweet 16. Previously, he was also an assistant for Thad Matta at three stops (Butler, Xavier and Ohio State).

Groce was supposed to infuse energy into a program that had lost momentum under Bruce Weber, who guided the team to the 2005 NCAA title game thanks to Bill Self’s recruits. Illinois made the NCAA tournament in Groce’s first year, but he has never had a winning record in league play. There have also been legal issues.

John Groce says Illinois is healthy and is the oldest team he's been around.
(More reasons the Illini better dance this year.)

Reasons to search StubHub for tournament tickets: Illinois should be healthier. Senior center Mike Thorne Jr. and senior guard Tracy Abrams were each granted a sixth year of eligibility due to injuries. Sophomore forward Leron Black is also returning from a knee injury. Assuming everyone is healthy, this could also be Groce’s deepest team. The Illini also has a go-to player in senior guard Malcolm Hill (18.1 ppg).

Reasons to start a GoFundMe page for the buyout: If the injury bug hits again. Also, if Illinois doesn’t get off to a good start with five relatively easy home games to begin the season. The Illini don’t play a true road game until the Big Ten opener at Maryland in late December.

Hot seat level as described by a musical artist: “Too Hot” by Kool & The Gang.

The lowdown: Bruce Weber has followed some popular coaches. At Illinois, he took over for Self, but never enjoyed the sustained success that Self built. The program backslid soon as Self’s recruits were gone. At Kansas State, Weber took over for the popular Frank Martin, who gave the Wildcats a much-needed identity. Again, the program has eroded under Weber’s watch.

Last year was the second straight year of missing out on the NCAAs and this season could be worse. Expectations are low. Weber is going to need to show some signs of progress to keep his job.

John Currie at Kansas State is going to regret not going after Brad Underwood and canning Bruce Weber. #kstatembb #Big12MBB

Reasons to search StubHub for tournament tickets: Senior forward Wesley Iwundu was a preseason second-team All-Big 12 selection. Freshman forward Xavier Sneed was a four-star recruit with athleticism. The team also took a foreign trip to Europe which should pay dividends.

Reasons to start a GoFundMe page for the buyout: Kansas State opens up the season against two of the league’s best teams: Texas and Kansas. It ends the season with three of five on the road with two of those games at Texas and Oklahoma.