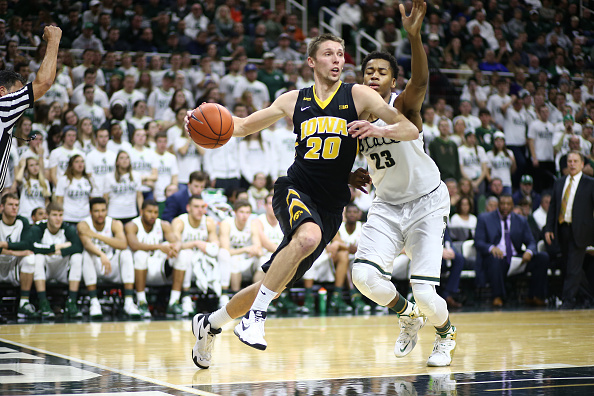 Welcome to Five College Basketball Questions You Need Answered. Any retransmission of this column without the express written consent of the author is prohibited and punishable by being forced to travel back in time with Bob Huggins (more on than later).

No.1 How seriously should we take Iowa as a Final Four contender?

Very seriously. The No.9-ranked Hawkeyes (14-3, 5-0 Big Ten) have four victories over ranked teams including a jaw-dropping sweep of Michigan State. The first victory over then top-ranked Sparty – 83-70 in Iowa City – was without Denzel Valentine. Last week, Iowa did it again – this time with Valentine in the starting lineup, winning 76-59 at No.4 Michigan State. It was the Hawkeyes’ first sweep over sweep of this series since 1992-93.

Iowa Hawkeyes, welcome to the big stage. Statement win at Michigan St. Hawks are playing like a Top 10 team. Confidence is a helluva drug.

It’s shocking to see Iowa at the top of the Big Ten standings along with Indiana (15-3, 5-0). This is the same squad that lost an exhibition game to Division II Augustana (South Dakota) 76-74. The Hawkeyes were picked to finish seventh in the 14-team league in the Big Ten preseason media poll.

Iowa has won four of their five Big Ten games by double digits..won at Purdue by 7 after trailing by 19 in second half

“We’re just constantly trying to push the right buttons with who we have,” Iowa coach Fran McCaffery told the Des Moines Register. “I think we have a good feel for what we have on our team in terms of talent, versatility, character, toughness.”

Senior forward Jarrod Uthoff is a Big Ten player of the year candidate. The league’s leading scorer is averaging 18.6 points, 6.2 rebounds and 3.1 blocks.

America: what a country, especially if you’re a college basketball coach. West Virginia’s Bob Huggins hugged his players after beating then-No.1 Kansas last week. He might as well have been embracing a sack of money.

Huggins will receive a $25,000 bonus for beating the Jayhawks. Most coaching contracts have incentives for winning championships and advancing in the NCAA tournament – usually not for beating a particular opponent.

Huggins makes $3 million annually so this won’t push him into a higher tax bracket. But it’s a nice chunk of change for a day’s work. Here are some suggestions on how to spend that money.

No. 3 How has Frank Haith escaped any substantial NCAA penalties?

Frank Haith seems like a snake oil salesman. He arrives to town with a miracle cure for whatever ails you. Before you realize you’ve been duped, he’s gone with your money and left you seething in rage.

Last week, Missouri announced that it has self-imposed a postseason ban for this season and is vacating all of its wins from the 2013-14 season. This stems from NCAA violations committed when Haith was the coach. The school also said that the verbal notice of inquiry from the NCAA came on April 14, 2014. That timing is suspicious. Haith was formally announced as Tulsa’s coach four days later.

The infractions include impermissible benefits and recruiting violations. Haith wasn’t directly named and won’t be punished. But this isn’t the first time a program run by Haith has gotten in trouble.

At Miami, his team was involved in the Nevin Shapiro scandal. By the time the NCAA got around to punishing Haith, he was at Missouri. He was suspended for five games in the 2013-14 season.

What does Tulsa think about all this?

“Frank Haith was not named in any of the reports,” Tulsa athletic director Derrick Gragg said in a statement. “Coach Haith has cooperated fully with the NCAA during this process and has not been accused of any wrongdoing during his tenure at Missouri.”

Tulsa is 11-6, 3-2 in the American Athletic Conference in Haith’s second season. Perhaps nothing will happen at the program but Tulsa has no right to be shocked if the NCAA enforcement staff arrives on campus in the near future.

No.5 Should Cal State Bakersfield’s Uber drivers be credited with an assist?

Absolutely. Last Monday, the Roadrunners found themselves in a pinch while trying to get to their game at Chicago State. Their team bus wouldn’t start due to the freezing weather.

When the team bus won't start in snowy Chicago…cram players into Ubers pic.twitter.com/K4It2u67sU

“It was snowing like crazy and we had to deal with the 5 o’clock traffic,” team broadcaster Corey Costelloe told the The Bakersfield Californian.  “The funny part: We had three Uber drivers and a cab, and they all took different routes to the arena. But everyone got there with an hour to spare.”