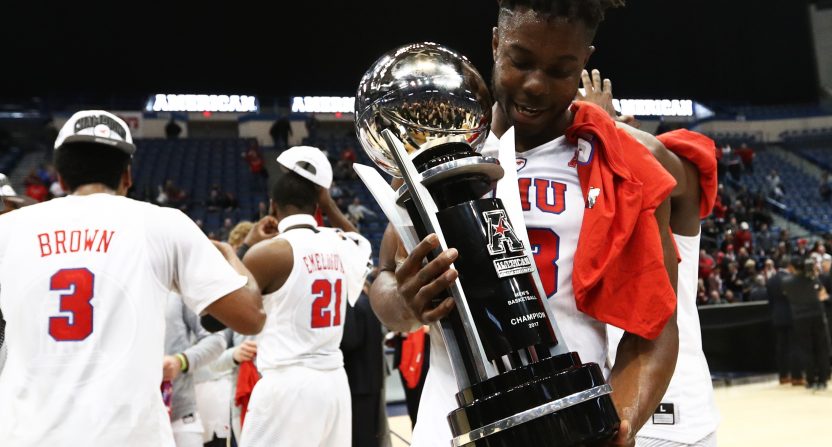 For numerous fans, chalk is the obvious deterrent for a possible Cinderella story in the NCAA Tournament. Just look at No. 16-seeded New Orleans, which possesses 10,000,000-to-1 odds to do the impossible in this year’s bracket. Unless a close relative is in serious debt, find a different miracle to buy into.

But remember when Michigan State was the favorite to win the national title a season ago? No. 15-seeded Middle Tennessee State shattered the No. 2-seeded Spartans’ expectations after they spent just 40 minutes in the Big Dance, knocking off coach Tom Izzo’s unit in the first round.

Evidently, upsets are what define March Madness. That usually means a smaller program defeats one of the powerhouse names typically associated with college basketball success. Let’s inspect five mid-major programs capable of burning many brackets come Thursday and beyond.

Despite already creating havoc last season, the Blue Raiders have returned for more, following their victory over Marshall in the Conference USA Tournament championship. Just like in the 2015-16 campaign, guard Giddy Potts (15.8) and forward Reggie Upshaw (14.5 ppg) carry the load offensively. Plus, Arkansas transfer JaCorey Williams, who owns a team-high 17.3 points per contest, provides a formidable presence in the frontcourt alongside Upshaw.

Middle Tennessee State unsurprisingly places No. 32 in Division I in offensive efficiency (1.10 points per possession). Considering there have been only four seasons since 1985 where a No. 5 seeds avoided an upset in the first round of the tournament, Minnesota should heavily brace itself for a one-and-done scenario.

After receiving some assistance from Davidson in the Atlantic 10 Tournament, the Rams rumbled their way to a conference tourney championship on Sunday with a 70-63 win over VCU. Thus, no at-large bid was needed for coach Dan Hurley’s group, and it was certainly warranted. His team ranked first in the A-10 in scoring defense, yielding 64.9 points per contest, as well as field goal percentage defense (40.4 percent).

In the scoring department, Rhode Island boasts three quality options in forward Hassan Martin (14.3 ppg) and guards E.C. Matthews (14.8 ppg) and Jared Terrell (12.3 ppg). Within the bracket, URI finds itself paired up with No. 6-seeded Creighton in the Midwest Region, along with an elite Oregon squad most likely looming if it can advance. Nevertheless, the Rams are capable of matching the Bluejays’ offensive prowess before bowing out in the Round of 32.

Once Georgetown witnessed Dunk City‘s rim-rattling finishes in 2013, the Eagles continued their trek to the Sweet 16, ultimately falling to Florida. They could make just as much noise in the West Region this time around, but their potential run comes with a different style of play. 6-foot-2, 180-pound junior Brandon Goodwin is one of the most underrated guards in the country, averaging 18.2 points, 4.6 rebounds and four assists per game. He also led the way in the Atlantic Sun Conference championship against North Florida with 19 points and seven assists), clinching their ticket into March Madness.

While Florida State, who FGCU will meet in the first round, tied for the third-most wins against the RPI top-50, they’re on a 7-5 run coming into the tournament. On top of that, Eagles forward Demetris Morant should frustrate Seminoles star Jonathan Isaac enough to give his team an opportunity to win the game in transition. From there, FGCU doesn’t have to worry up until a possible match-up with Arizona in the Sweet 16.

While the Shockers were severely under-seeded in the South Region, coach Gregg Marshall knows a thing or two about making a run as a lower seed. In 2013, his bunch notched a berth in the Final Four as a No. 9 seed. This team doesn’t have the well-known stars of the past, like Ron Baker and Fred Van Vleet, but its starting core is extremely explosive, helping place the program at No. 3 in the country in three-point shooting (40.7 percent).

Additionally, the Missouri Valley Tournament champs frustrate their opponents on the other end of the floor, ranking No. 2 in the nation in defensive efficiency (.87 ppp). Led by Markis McDuffie (11.8 ppg), Landry Shamet (11.1 ppg) and Darral Willis Jr. (10.2 ppg), expect Wichita State to cause plenty of concerns in its region for powerhouses Kentucky and UCLA. A trip to the Elite 8 is certainly obtainable.

With a 15-point thrashing of Cincinnati in the American Athletic Conference title game on Sunday, the Mustangs strung together their 16th consecutive victory. Given the fact that the Bearcats still received a No. 6 seed, it’s safe to assume that like the Shockers, SMU was unfortunately under-seeded as well. Hence, regardless of the defending national champion Villanova Wildcats, as well as Duke, positioned in its region, there’s plenty of optimism to go along with Tim Jankovich’s team.

SMU is elite on both sides of the court, sitting at No. 6 in the country in offensive efficiency (1.14 ppp) and No. 15 in defensive efficiency (.92 ppp). Individually, Duke transfer Semi Ojeleye (19 ppg) represents one of the most unnoticed scorers in the country, as he can consistently stretch the floor unlike many big men around college basketball. The 6-foot-8, 230-pound forward shoots 53.8 percent from two-point land and 42.3 percent from downtown, giving the Mustangs a legitimate shot at coming out of the East Region.