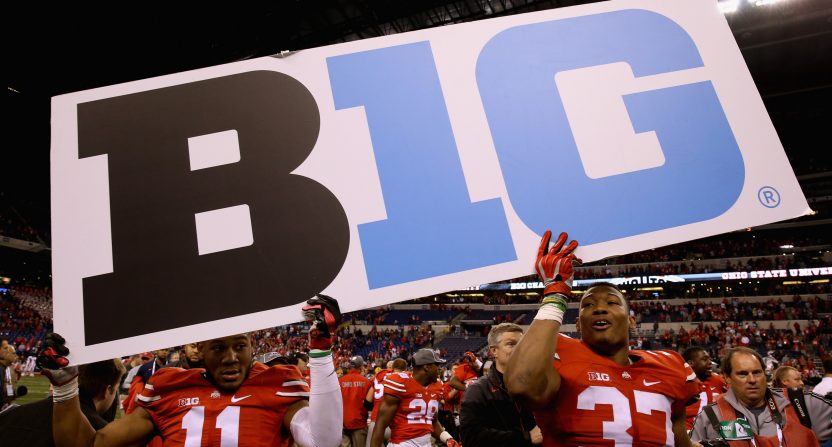 Prior to the beginning of conference media days, the Big Ten rolled out a proposal to implement an NFL-style injury reporting structure. The proposal was in response to the government’s decision to allow states to sanction legalized gambling, which has forced sports leagues and conferences to address how it may impact their respective sports. As far as the Big Ten is concerned, legalized gambling will force college sports to adjust their injury reporting system for the sake of the integrity of the game (sure, whatever).

The idea floating around led to some discussion within the other power conferences over the past week with coaches and commissioners in the ACC, Big 12, and SEC all sounding off on the idea without coming to a true consensus on how to approach the issue of reporting injuries. This will be the Big Ten’s first chance to publicly address the proposal and answer questions about it.

2. Ohio State once again a favorite

The Buckeyes have an inexperienced quarterback for the first time in years but that doesn’t mean Ohio State is hurting for talent. The same is true for nearly any position with a new starter stepping in. Urban Meyer and his staff have recruited at such a high level since getting to Columbus that restocking positions is easier at Ohio State than at any other Big Ten program. The gap in recruiting rankings has been significant for a long time and even if some others are starting to close the gap, Meyer’s Buckeyes have been ahead of the curve and will be difficult to catch.

That doesn’t mean Ohio State is invincible, of course. They could suffer a loss somewhere along the road. But two losses in conference play? That seems unlikely. What will be more interesting to see in the division predictions will be the order after Ohio State and Wisconsin. Specifically, how does the Big Ten media feel about Michigan? Is Northwestern a viable threat in the West? And how much does Scott Frost change the outlook for Nebraska?

Calm down, Michigan fans. Nobody is seriously suggesting Michigan should start thinking about moving on from Jim Harbaugh, but it is fair to suggest this is a pretty important year for Harbaugh in Ann Arbor. With a defense expected to be as good as ever and the addition of transfer quarterback Shea Patterson, this has the look of Harbaugh’s best team since being hired by Michigan. Does that mean Michigan is headed for a run to a Big Ten title?

The opinions on Michigan appear to vary nationally, with some suggesting this is a top 10 team ready to make a conference title run and possible playoff push and others seeing a possibility Michigan finishes no higher than a third place in the division. This is Harbaugh’s fourth season and his fingerprints are now firmly found on the roster. With as much as Michigan and boosters are investing in the football program, it is time to see Michigan step up in the division and challenge Ohio State for the division (and conference) crown. To be fair, Michigan did just that two seasons ago but the Wolverines took a bit of a step back last season with losses to Ohio State, Michigan State, Penn State, and Wisconsin before ending the year as the only Big Ten team to play in a bowl game and lose.

4. New-look Penn State or more of the same?

Penn State’s offense has been one of the most improved units in the Big Ten the last couple of years. Having a running back like Saquon Barkley and an innovative playcaller like Joe Moorhead was a big reason why, and both are now gone (along with a few others of note). Because of the departures from the offense, many are a bit cautious with what to expect out of Penn State on offense this season, which is fair.

So how much will actually be different with the offense? New offensive coordinator Ricky Rahne may stick to some familiar tactics, and doing so with third-year starting quarterback Trace McSorley allows him that luxury this season. There is some talent on the roster, but it has to be asked if Penn State will look forward to trying anything new on offense this fall. If things continue to click, Penn State could prove to be a playoff contender. This is the fifth year with James Franklin at the helm, and Rahne will be the third offensive coordinator he has had.

The Scott Frost narrative at Nebraska is a fun one considering he is coming home after guiding UCF to the only undefeated season last year, thus allowing UCF to stake their claim to a national championship. Scott Frost and Nebraska is a terrific combination and the future looks bright for Nebraska for the first time in quite some time. However, the schedule gives them no breaks this season and there is a real possibility Nebraska fails to reach the postseason this fall.

But it will be great to see Frost represent Nebraska on this preseason stage for the first time, and he will certainly be the star of the show among the Big Ten West coaches, which includes personalities like Jeff Brohm of Purdue, P.J. Fleck of Minnesota and Pat Fitzgerald of Northwestern. There are some really good coaches in the division. Of course, that also includes Paul Chryst of Wisconsin, who makes me fired up to do some long division but leaves me no reason to doubt his success and style.

Expect Frost to be asked about UCF and the national championship and the College Football Playoff in some capacity, but also expect to see Frost try to keep the focus on Nebraska.