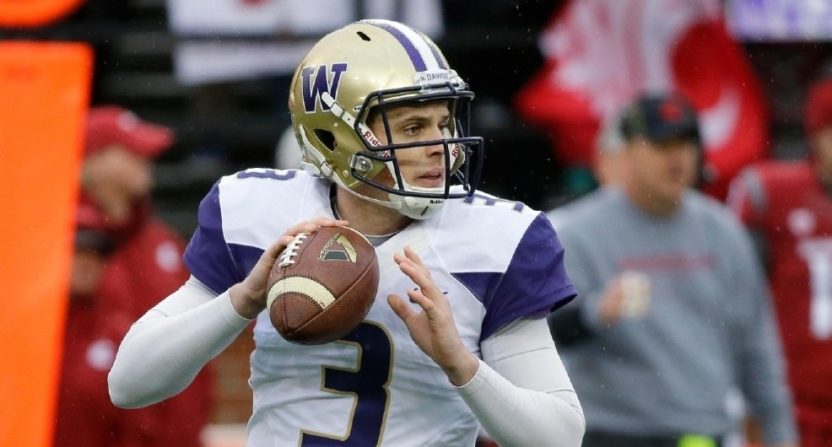 For the second straight year, there will be no Pac-12 team in the College Football Playoff. As it did a year ago, the so-called Conference of Champions ate itself apart this season to ensure the grand prize at the end of the season would be the Pac-12’s automatic bowl tie-in in the NEw Years Six. Last year, because the Rose Bowl was being used to host a College Football Playoff semifinal (which ended up being between Oklahoma and Georgia), the Pac-12 champion (USC) was sent to play in the Cotton Bowl against the Big Ten champion (Ohio State) in a Texas version of the traditional Rose Bowl matchup.

This year, the Rose Bowl is open for business for the Pac-12 and Big Ten, and on Friday night one slot in this year’s Rose Bowl will be decided between Washington and Utah in the Pac-12 championship game. Washington is looking to play in their first Rose Bowl in nearly two decades while Utah is simply looking to book their first trip to Pasadena for all the roses.

Here are five things to take note of as the Pac-12 crowns a conference champion.

The Pac-12 was a bit of a mess this season, not that Utah should have to apologize for being the champion in a struggling division. The Utes went 6-3 in Pac-12 play this season and cleared the division by a game, with Arizona State coming in second place with a conference record of 5-4 and every other team in the division (Arizona, Colorado, UCLA, and USC) all failing to meet postseason eligibility this season.

When Utah made the jump from the Mountain West Conference to the Pac-12, it was clear this was a program with the potential to make their way to a Pac-12 championship game at some point, even if it may require some breaks from around the division. Utah head coach Kyle Whittingham had some work to do in improving the roster to compete in a power conference with bigger and stronger linemen and more athletic skill position players. Utah had come close to reaching this point within the last couple of years, but they have finally arrived and are ready to show they do belong on this stage.

Amid all of the conference realignment changes that went down a few years back, Utah and TCU were the programs making the biggest jumps from the Mountain West Conference to the power conference life. TCU reached their first Big 12 championship game last season (although the Horned Frogs earned a share of the Big 12 title in 2014), and now Utah is ready to play for their first Pac-12 title.

2. Utah is banged up

Utah getting here is slightly fortunate given some key injuries down the stretch this season. Quarterback Tyler Huntley suffered a broken left collarbone and is said to be questionable for Friday night against the Huskies. Linebacker Donavan Thompson is also questionable after missing some playing time with an unspecified injury.

This is also a Utah team that is already without leading rusher Zack Moss with a knee injury and offensive lineman Johnny Capra (undisclosed injury). Simply put, Washington’s defense should be prepared to face some backup players and the difference in roster depth should be a difference-maker that favors Washington.

The Huskies have their share of injuries too, but their best players expected to be a factor Friday night appear to be in good shape.

This will be the next-to-last final game played by Washington quarterback Jake Browning (seen above) and running back Myles Gaskin. Both players have played a key role in elevating Washington as a program under Chris Petersen, and it would be fitting to see them go out as Pac-12 champions.

Browning had been hyped as a potential Heisman Trophy candidate and high draft pick next year, but his play has been a little up and down at times this season. Expect Browning to have one of his better performances in this game with a chance to win a Pac-12 title for a second time as Washington’s starting quarterback.

Gaskins has often been overlooked nationally in the conversation for top running backs, which is a shame. Gaskins has rushed for 1,300 yards in each of the last three seasons and has a chance to reach 1,300 yards again by the end of the season between the Pac-12 championship game and the pending bowl game. He is also sitting on 59 rushing touchdowns coming into this game. His combination of speed and vision make him a home-run threat waiting to happen.

5. The Rose Bowl on the line

As mentioned earlier, there are no College Football Playoff stakes on the line in this season’s Pac-12 championship game, but a trip to the Rose Bowl is no consolation prize here.

Washington has not played in the Rose Bowl since the 2000 season when the No. 4 Huskies, coached by Rick Neuheisel, topped Drew Brees and No. 14 Purdue. Whatever happened to Marques Tuiasosopo anyway? (He’s a QB coach at Cal now). Washington has also lost two straight New Year’s Six bowl game appearances, so what better place to break that streak than in the Rose Bowl?

Utah will be looking to play in their first Rose Bowl Game. The Utes are one of three Pac-12 teams to never appear in the Rose Bowl, joined by fellow expansion member Colorado as well as Arizona (Cal has appeared in the Rose Bowl eight times, but the last came in 1959, prior to the founding of what would become the Pac-12 later that year ). The Big Ten’s most recent additions, Maryland and Rutgers, are the only Big Ten schools to never play in the Rose Bowl (Nebraska played in the Rose Bowl as a member of the Big 12).

Whoever ends up in Pasadena could make for one-half of an interesting matchup with likely Big Ten champion Ohio State. The storyline of Urban Meyer coaching against his former program at Utah, where Whittingham continues to be the head coach after succeeding Meyer when he left for Florida, is a really good one. As would be a Chris Petersen matchup against Meyer. And yes, any matchup with Northwestern’s Pat Fitzgerald would be interesting to see.

If you are the Rose Bowl, you are likely pulling for Washington vs. Ohio State first, and Utah vs. Ohio State second. Sorry Northwestern. And if Ohio State sneaks into the playoff, you’ll be seeing Jim Harbaugh and the Michigan Wolverines facing off against either Washington or Utah. That could be fun too.