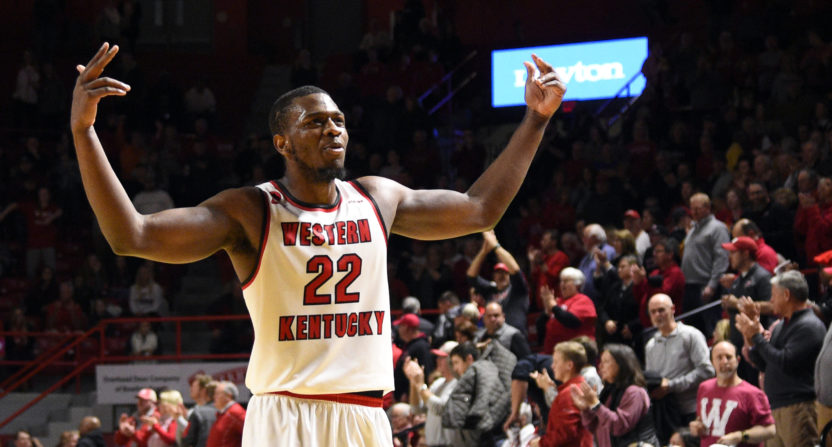 The NCAA Tournament Selection Committee has trended toward snubbing mid-majors from the at-large field in recent years. Rhode Island likely would have gotten snubbed in 2017 without winning the Atlantic 10, and even Gonzaga came dangerously close to missing out in 2016 before winning the WCC.

This season, there are a handful of mid-majors finishing January still with a legitimate shot at earning an at-large bid to the 2018 NCAA Tournament. For the 20th straight year, Gonzaga will go dancing no matter what happens in the WCC Tournament. But here are six additional mid-majors who could have a case for a spot even if they lose in their respective conference tournaments, ranked in order of Bart Torvik’s estimated chance of receiving an at-large bid:

The Comeback Bracketology: No. 4 seed

URI is practically a lock to make the NCAA Tournament. The Rams are 18-3 with their worst loss coming at Alabama, another potential at-large team, without star guard E.C. Matthews. They didn’t get a ton of chances against top competition, but wins over Seton Hall and Providence should be enough for the Selection Committee barring a February collapse.

The Rams are easily the best team in the Atlantic 10, ranking No. 32 in KenPom. But they’ve been fortunate to escape with a perfect record thus far. Their last two wins have come by a combined five points, and they still must face Saint Bonaventure, VCU and Davidson on the road. They can afford to slip up once or twice, but losses to all three, followed by an Atlantic 10 Tournament defeat would leave them sweating a bit on Selection Sunday.

Nevada narrowly missed out on big non-conference wins over Texas Tech and TCU, but a big win over Rhode Island leads its resume. The Wolf Pack could be the best overall team on this list when looking at the combination of predictive and results-based metrics. They’re currently ranked No. 15 in RPI and No. 18 in KenPom.

Last week’s double overtime loss at Wyoming dropped Nevada down a peg after the Wolf Pack had already lost to San Francisco on a neutral site in December. The Mountain West is a significantly tougher league than the Atlantic 10 this year, which makes Nevada’s February slate tougher than Rhode Island’s but could also give the Wolf Pack more room for error than their Atlantic 10 counterparts.

Nevada is currently 1-3 against Group 1, but it gets the opportunity for another big win Feb. 14 at Boise State.

It looks like the Gaels will make consecutive NCAA Tournaments after missing the dance each of the three prior seasons. Ranking No. 16 in KenPom with the fourth most efficient offense, this is a dangerous team capable of making a run. They already knocked off Gonzaga in Spokane, which is a promising sign they could snag the WCC’s auto bid and not worry at all on Selection Sunday.

With a marquee road win over Gonzaga and only one loss outside the top 100, Saint Mary’s could climb to a top four seed and play its first weekend games in a favorable location like San Diego or Boise.

Kermit Davis’ program has been here before. The Blue Raiders received Conference USA’s automatic bid the last two years, but played in the 2013 First Four as an at-large out of the Sun Belt.

Middle Tennessee ranks No. 27 in RPI with a quality win at Western Kentucky. (Western Kentucky? Yeah, it will become more clear why that’s a solid win when we discuss the Hilltoppers in a minute.) Unfortunately, the Blue Raiders narrowly missed out on three more marquee wins, losing neutral-site games to Auburn, USC and Miami by a combined 14 points. They have only one loss outside Group 1 and Group 2, and WarrenNolan.com predicts by season’s end all their losses will be inside the top two quadrants.

Ranked No. 45 in KenPom, Middle Tennessee would be quite a matchup for a higher seed. The Blue Raiders are certainly capable of advancing in the NCAA Tournament for a third straight season, but they have to get there first.

Imagine how good Western Kentucky could have been with five-star freshman Mitchell Robinson, who had a bizarre exit from the program in September. The Hilltoppers began the season ranked No. 230 in KenPom and have climbed all the way to No. 46 with neutral-site wins over Purdue and SMU. (Their win at Old Dominion three weeks ago is also sneakily solid.)

WKU has taken some lumps as well, which is why its currently just outside the at-large field despite being the only team to beat No. 3 Purdue in regulation. The Hilltoppers own home losses to Missouri State and Belmont and road defeats to Ohio and Wisconsin. They’ll need to win their next seven games, with none of those opponents ranking in the RPI Top 200. They then finish the season with Old Dominion, Middle Tennessee, and UAB.

If Western Kentucky can finish 9-1 in their final 10 games, it can feel great going into the conference tournament. Even 8-2 would give the Hilltoppers a slim chance.

The Ramblers have a big road win against Florida, which is easily the most alluring win for any team on this list. The Gators haven’t been quite as good as expected, but they’re still nationally ranked in the polls and No. 37 in RPI.

Other than that, Loyola is riding on victories over borderline top 100 teams. The Ramblers are 3-1 against Group 2 teams, with the best of those wins coming at 12-11 Illinois State. They’ll have three more chances for Group 2 wins in the deep MVC before the regular season, and possibly a few more in the MVC Tournament.

The Ramblers are two losses away from their bubble bursting, and even one loss in the MVC championship game could send them packing for the NIT. Their non-conference strength of schedule, which ranked No. 281, and losses to Indiana State and Milwaukee leave Loyola almost no room for error.