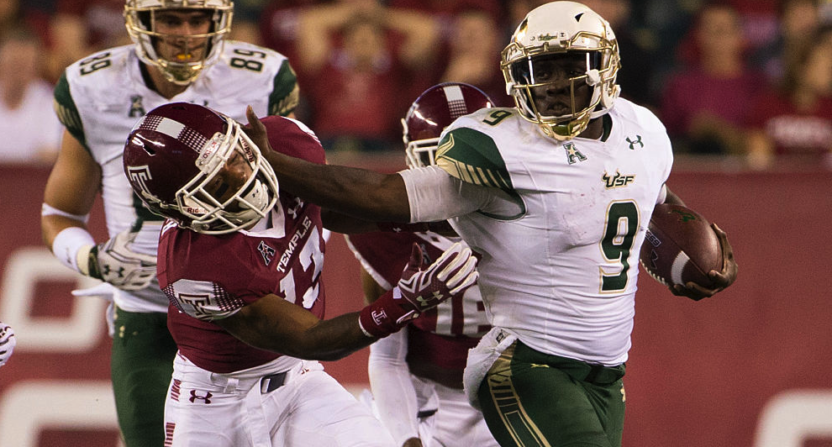 Every college football season, there are a select number of games that really shape the standings in each conference. Here are the games that will decide who plays in the AAC Championship Game this season.

Week four of the season brings us our first truly intriguing conference match-up. This will be the first conference game for Temple’s new coach, Geoff Collins, and the second for USF’s Charlie Strong.

Last year, USF lost just one conference game. That game was to Temple and because of the loss, the Owls represented the East in the championship game instead of the Bulls. This matchup will set the tone for the conference season for both teams and will mark the team to beat in the East.

Philip Montgomery has really turned the ship around at Tulsa but he’s still waiting for his team to take the next step. Navy represents a huge challenge for the Golden Hurricane. This game pits the top two teams from the West in 2016 against each other and will go a long way to declaring who is the early alpha dog in the West.

Last year, the Mustangs had a 2-4 record heading into the game against Houston but shocked the Cougars with a 38-16 upset. This battle of in-state schools creates a great opportunity for Chad Morris and SMU. If they can beat Houston in back-to-back years, it will really show that they are on the map and that they are a team to be reckoned with in the West. For Houston, this is the type of game that Major Applewhite simply can’t lose in year one.

The West appears to be the tougher division this year with Houston, Memphis, Navy, Tulsa and a rising SMU. This is a very important game for Memphis and Mike Norvell. Navy came into the conference last year and staked their claim on the West by going 5-0 in the division. If Memphis wants to make a move, they have to go through Navy.

This game may be even more important for Mike Norvell and the Tigers as they are going on the road against Houston and are doing it in a short week. Back-to-back losses to Navy and Houston would be disastrous. This is a must-win for the Tigers. Houston will also be on a short week (playing at home), but they should see this as a real chance for them to eliminate Memphis from contention. This is where we will see the resolve that Memphis has and/or the killer instinct of Houston.

This game is between what we feel are the best two teams in the conference. Charlie Strong’s USF against Major Applewhite’s Houston. Depending on what precedes this match-up, it could be the chance for one of these two teams to really make an impact on the national level. This could also be the precursor of the conference championship game.

In year one at UCF, Scott Frost took the Knights from zero wins to six wins. The next step is to start winning big games. The biggest game on the UCF schedule is the finale against USF in Orlando. This is a chance to cap a great season for the Knights and also a possible chance to play spoiler and send a message to Charlie Strong and the state of Florida.