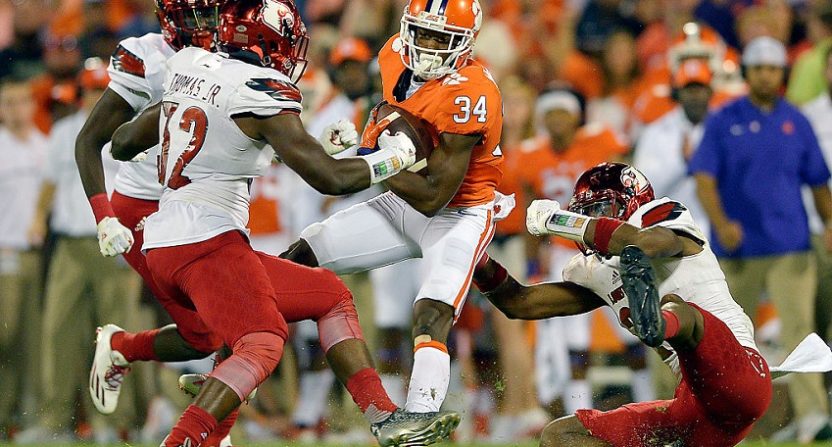 During every college football season, there are a select number of games that really shape the standings in each conference. With national powers like Clemson, Florida State, Louisville and Miami, the ACC will have several matchups this year that could influence the College Football Playoff and national championship pictures.

Here are the nine games that will decide who plays in the ACC Championship Game this season.

Clemson loses the best quarterback ever to play for them. The Cardinals return the Heisman Trophy winner at quarterback. If Bobby Petrino and the Cards are going to make a run at the championship, this is where they have to start. It is a great opportunity for the Cards, as they have a chance to catch the Tigers early in the season.

The last time the Hurricanes beat the Noles was during the last decade (2009)! If Mark Richt could pull off an upset here, it would really put them in the driver’s seat for the Coastal division and it’s really a must-win for FSU, as they can’t give up their state dominance over Miami.

The Coastal division is up for grabs this year and this early-season game will dictate if one of these two teams can assert themselves as a team to beat. Georgia Tech has a chance to be really good this year, but must replace their quarterback. Pitt is in year three under Pat Narduzzi, but have a ton of question-marks.

Assuming Miami falls to Florida State on Sept. 16 (like they have the past seven years), this is a must-win for the ‘Canes. With back-to-back games against Pitt and Miami, the Jackets have a chance to show that they mean business early and grab the division lead by the throat.

Last year, the Seminoles got THUMPED by Louisville. This game is about pride, but it’s also about the end game. The last seven ACC Champions have been from the Atlantic division and this is a game that Louisville must win if they want to put themselves in that elite group with Clemson and FSU.

This game pits, potentially, the two best teams in the Coastal against each other. Being that this game is towards the end of the season, this could be the game that decides who goes to the championship.

On a short week after visiting Miami, the Hokies have to travel to Atlanta. The Hokies once had a stranglehold on this match-up, but over the last four years we’ve had a different winner every season (with the road team winning every year). Miami is the probable favorite for the Coastal but these two teams are very much in the running and this could be the de-facto Coastal division title game.

Recently, this has been the big game in the ACC. These two teams have won the last six ACC Championships and have played in the championship game eight straight times. Unless Louisville breaks through, this is the game that will decide the Atlantic division, and likely the ACC Champion.