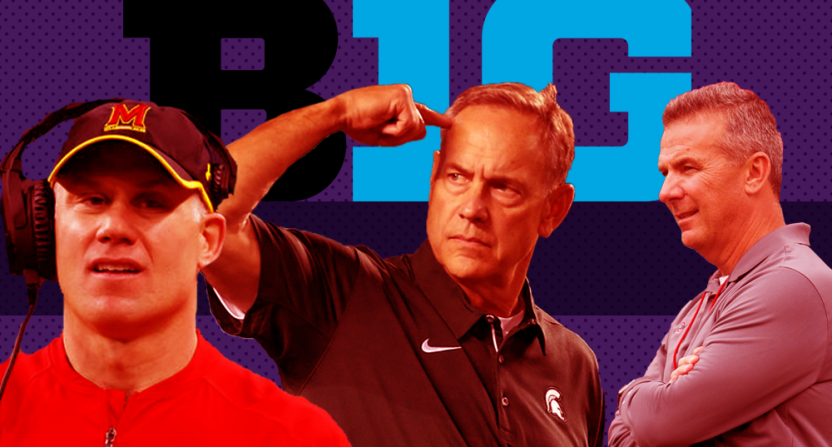 The SEC takes a lot of heat as the bastion of the “bag man” and the home of corruption in college football. And while there are some terrible things that have happened under their watch, most of the infractions you can point to involve violations of the rules or skirting around financial laws. Not great but hardly the stuff of pulp crime novels.

The Big Ten, which likes to position itself as the home of old-school slobberknockers and the last reminder of halcyon days when men were men, has done the improbable in a little over one calendar year. It’s supplanted the SEC (and then some) as the nation’s grimiest college football conference. While not every school in the conference has besmirched itself in the name of football revenue, the crimes some of them have committed at its altar are so gross and so unbecoming of everything the Big Ten claims to be about, that it’s strangely impressive in a truly terrible way. Plus, at no point does it seem as though the people in charge have learned anything or feel much remorse about what they’ve done or let happen. It’s a staggering display of inhumanity and greed at its finest.

A lot has happened in a short amount of time, so let’s take a stroll through wish-we-could-forget-this-memory lane at everything that’s gone done in this godforsaken conference.

(A brief reminder before we get started that we’re not even going to get into the Jerry Sandusky scandal at Penn State, the Grand Daddy of Them Awful).

You could scan the entirety of Michigan State University throughout the entire Larry Nassar scandal, from when it broke to current day, looking for an adult to take responsibility for what happened on their watch, and you would still come away with nothing. The university handled the scandal and the fallout just about as poorly as any this side of Baylor could choose to. While there is plenty of blame to go around over the lack of leadership and character, but Mark Dantonio certainly deserves a boatload.

In February, ESPN reported that at least 16 Michigan State football players had been accused of sexual assault or violence against women in the time since Dantonio took over the Spartans program in 2007. He was also allegedly involved in handling the discipline in at least one of the cases. When asked about it, Dantonio claimed no such cases had happened and he was never aware of any accusations. Because as we’ve all learned in recent years, the people in charge of college football programs, who we are told are hyper-vigilant and aware of everything that goes on regarding their team, often have a complete lack of awareness when it comes to their players doing things that might put their status in jeopardy.

In the grand scheme of things, Dantonio was only the 7th or 8th most culpable person at Michigan State, but that’s not saying much.

Given all the awful things that have happened in the Big Ten this year, it’s understandable that this one might have faded from your memory. Husker wide receiver Tyjon Lindsey and defensive lineman Dylan Owen were hospitalized in January following offseason workouts. The two players were treated for rhabdomyolysis, a muscle injury that “results from the death of muscle fibers and release of their contents into the bloodstream,” per WebMD. It can lead to complications such as kidney failure.

No one on the Nebraska staff was suspended or punished for putting players in the hospital and there are plenty of people who tried to minimize the event by saying it’s a common occurrence among those who participate in strenuous activity. But, still, it’s never a good thing when someone ends up in the hospital. And, it was also a harbinger of what was to come.

If you’ve followed college football in recent months you’re likely well versed in this scandal. Just months after it was revealed that Ohio State was investigating a former physician who sexually molested student-athletes for years, news broke that OSU football assistant Zach Smith had a protective order against him from his ex-wife over domestic abuse charges. From there we learned that there were multiple incidents like this in Smith’s past and head coach Urban Meyer was aware of most if not all of them. Meyer angrily denied the claims until it was proven that he did know. He was suspended pending an investigation and, somehow, kept his job with a three-game suspension. Despite his best efforts, it was clear Meyer didn’t really believe the abuse victim and seemed to see himself and Smith as the true victims of the ordeal. When Ohio State got their clock cleaned by Purdue a few weeks back, there was a whole lot of schadenfreude out there and it wasn’t just because the Buckeyes were previously undefeated.

Meyer is already laying the groundwork for leaving the job at the end of the season. He’ll chalk it up to health and perhaps that is true, but the legacy of this “model citizen” is forever tarnished now as he was revealed to be just the like the rest of the “great” coaches out there, who see themselves as gods who should be treated as such and who are above responsibility when it actually matters.

A Player Dies on DJ Durkin’s Watch And, Somehow, He Keeps His Job

You would think that, surely, letting a student-athlete die on your watch was grounds for termination from your job. At the very least, right? Well, this is the Big Ten we’re talking about. Because that’s how it went down at Maryland. Maryland sophomore offensive lineman Jordan McNair died this past June following a collapse during a May workout. ESPN reported that McNair “died of heatstroke after showing visible signs of distress” at the team practice. Furthermore, a scathing ESPN report revealed the “toxic culture” inside the Maryland Terrapins’ football program under head coach DJ Durkin. Durkin was placed on leave and it was assumed, pending an investigation, that he would be fired. Obviously.

But obviously not. Tuesday, the Maryland Board of Trustees basically overruled the president of the university and Durkin is not only keeping his job but he’ll be back on the sidelines this weekend. No matter the charges abuse and emotional damage that Durkin and his coaches put on his players. He has been deemed by the university as a perfectly fine person to oversee a large group of students once more.

It should be noted that the overruled university president is resigning following the decision, so at least one adult at Maryland has some human decency.

So far we’ve spent a lot of time talking about how Big Ten coaches are human garbage monsters but it’s nice to know that the players are stepping up as well. News also broke Tuesday that Rutgers linebacker Izaia Bullock had been arrested and faces two counts of first-degree attempted murder and two counts of first-degree conspiracy to commit murder. According to the prosecutor, “Bullock initiated a plot to murder the family members of an acquaintance.” He was not successful, thankfully, and it should also be noted that he was dismissed from the Rutgers football team on Tuesday as well. He also faces disciplinary proceedings from the university but we’re thinking he’s probably more concerned about the murder charges that the state is bringing against him.

There may be some terrible things that we’ve forgotten but that’s just a testament to all of the truly terrible people involving in Big Ten Football in 2018. The conference likes to use the slogan “Dream Big” but we’d recommend they start smaller. Dream Human, and then maybe we can go from there.