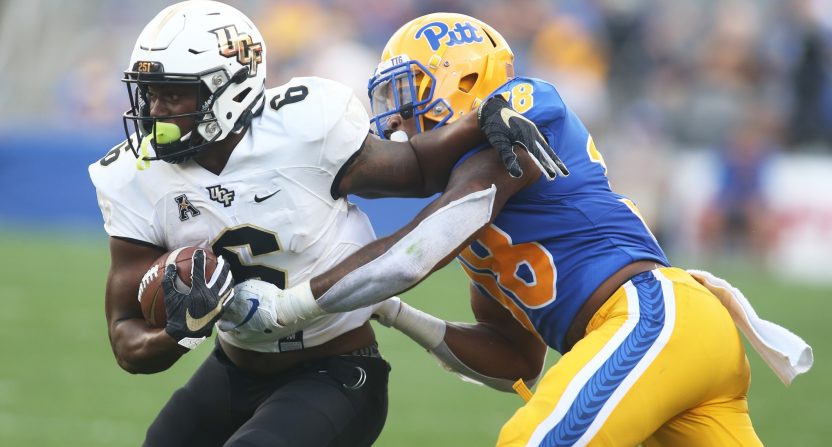 It was bound to happen at some point, and on Saturday it finally did. UCF had their 27-game regular-season winning streak  (their overall winning streak ended at 25 in January with a Fiesta Bowl loss to LSU), the longest current streak in FBS, snapped by the Pitt Panthers in a stunning 35-34 game. UCF dug a big hole by falling behind the Panthers 21-0 but they battled their way back and held a lead late in the fourth quarter. But the Panthers rolled out a Philly Special to tie the game at 34-34 in the final minute of the game, and the extra point gave the Panthers the lead. (And that was all a lot of ABC viewers saw.)

And just like that, UCF’s winning streak in the regular season was no more.

A road loss by one point is hardly enough to suggest UCF is out of the mix for a spot in the New Year’s Six bowl lineup. There are still two months of football to be played after next week, and UCF should still be one of the top contenders in the American Athletic Conference, which keeps them firmly on the radar for the New Year’s Six bowl spot at the end of the season that’s reserved for the highest-ranked Group of 5 champion. Saturday’s events were celebrated in Boise, Idaho (the No. 20 Broncos beat Air Force 30-19 Friday), but UCF still has a lot to play for moving forward. They just don’t have a spot in the College Football Playoff unless this season really goes off the rails. So for now, we can put the playoff arguments on the bookshelf, but UCF is about to get started in conference play for the rest of the season.

This feels like a good time to put into some perspective just how successful UCF has been in the regular season. After all, winning one game in college football can be an incredibly tough task. Doing it 27 straight times in the regular season is a testament to just how well prepared UCF has been. Doing it under two different coaches and coaching staffs makes it even more remarkable.

The streak started on August 31, 2017 with a home blowout of FIU, 61-17 (Win No. 1), in Scott Frost’s second year as head coach. Frost and the Knights gave new FIU head coach Butch Davis a rude welcome back to the college football world.

Hurricane Irma interrupted UCF’s schedule the next couple of weeks by washing out home games against Georgia Tech and Maine. But the Knights resumed their 2017 season on Sept. 23 when they traveled to relatively new Big Ten territory for a game against Maryland (Win No. 2). The 38-10 margin against the Terrapins proved the layoff and storm did not knock UCF off course.

The game against Maine was eventually cancelled, the casualty of UCF having to reschedule a conference game against Memphis, but the Knights went and beat the Tigers the following week and made the AP Top 25 for the first time since 2013. Their first game in the rankings looked like they belonged there, as they went on the road to take care of business against Cincinnati (Win No. 4) with a 51-23 victory. It was smooth sailing the following week at home against East Carolina (Win No. 5) in a 63-21 laugher. Things got tougher in their next game, at Navy. For the first time, the Knights were in a true battle, but the Midshipmen could not find a way to get any closer than three points before falling 31-21 in Annapolis. It was the first 6-0 start to a season in UCF program history.

UCF picked up Win No. 7 the next week on Oct. 28, 2017 with a lopsided matchup against Austin Peay, 73-33, but then the Knights had to escape another close call on the road in conference play against SMU (Win No. 8). UCF then went cruising the next couple of weeks at home against UConn (Win No. 9) and on the road against Temple (Win No. 10) before their rivalry game with South Florida. The Bulls had been picked as the team to beat in the AAC and were looking to spoil UCF’s hopes and dreams of playing in a major bowl game, and perhaps give themselves a shot to go to a big bowl game instead. The Friday after Thanksgiving was a thriller between the two in-state rivals, but UCF prevailed, 49-42, to lock up homefield advantage in the AAC Championship Game.

UCF had climbed to No. 12 in the AP poll after the win against USF, and a spot in the New Year’s Six was looming with the AAC Championship Game heading to Orlando. Frost, meanwhile, was about to leave UCF for his dream job at Nebraska. Before he left, there was some business still to attend to against No. 16 Memphis. The AAC Championship Game turned into a wild shootout with UCF winning 62-55. For official record-keeping purposes, conference championship games tend to be included with the regular season, so mark this one down as Win No. 12.

UCF went on to finish the season in style with a victory over Auburn in the Peach Bowl, and the Knights spent the offseason celebrating their claim to a national championship whether people like it or not. But Frost was on to Nebraska and UCF hired Missouri offensive coordinator Josh Heupel to take over as head coach. The transition would be pretty smooth, as UCF didn’t skip a beat in the 2018 regular season.

It was business as usual in Win No. 13, a 56-17 season-opening victory at UConn. Then, wins against South Carolina State (No. 14), Lane Kiffin and FAU (No. 15) and (ironically) Pitt (No. 16) would be lopsided affairs with UCF winning by 38, 20, and 31 points respectively. UCF then played host to SMU and made sure there would be no close calls this season with a 48-20 victory for Win No. 17. That set the stage for the closest call UCF would have in the regular season during their streak. Naturally, it came against Memphis, on the road.

The No. 10 UCF Knights trailed 17-7 after the first quarter and went to halftime down by a score of 30-17. But a second-half rally led to UCF keeping their streak alive as they once again frustrated Memphis. McKenzie Milton’s touchdown run early in the fourth quarter proved to be the game-winner in an AAC classic.

UCF followed up their latest conquest over Memphis with wins at East Carolina (No. 19) and home against Temple (No. 20) by double digits, although Temple gave the Knights a good run before falling 52-40 in Orlando on a Thursday night.

UCF then continued to go on cruise control into another AAC Championship Game by picking up wins against Navy (No. 21), a ranked Cincinnati team (No. 22) and on the road against South Florida (in far less thrilling fashion in Tampa for Win No. 23). After climbing as high as No. 7 in the AP poll, UCF was still on the outside looking in of the playoff field, but they had a chance to lock up one more trip to a New Year’s Six bowl game. And without starting quarterback Milton available after a devastating injury against USF the previous week, UCF faced perhaps their second biggest threat to their regular-season winning streak, once again against Memphis.

After Memphis jumped out to an early lead on the Knights in Orlando, Darriel Mack and UCF started to get the bounces to go their way. After trailing 24-7, UCF went on to win 56-41 to lock up a second-straight trip to a New Year;s Six Bowl game.

UCF saw their overall win streak come to an end against LSU in the Fiesta Bowl to close out the 2018 season (perhaps a precursor of what was to come from the LSU Tigers in 2019?), but the regular-season winning streak continued as the 2019 season got underway. A laugher against overmatched Florida A&M (No. 25) showed UCF was still going to be a potent offense, and they followed that up with a 34-point victory against FAU the following week for Win No. 26.

As fate would have it, UCF’s final win in their regular-season winning streak came against one of the more respected power conference opponents to appear on UCF’s schedule in recent years, outside of bowl matchups with Auburn or LSU. Stanford made a cross-country trip to UCF in Week 3 of the 2019 season and flew home with a lopsided defeat. The Cardinal may have been banged up coming in, but UCF used Stanford as an opportunity to make as loud a statement as they could. A 45-27 victory over Stanford was the best non-conference win for UCF during their 27-game winning streak in the regular season.

Now, it’s back to the drawing board for the Knights as they look to start putting together another winning streak. First up? UConn, next week in Orlando.