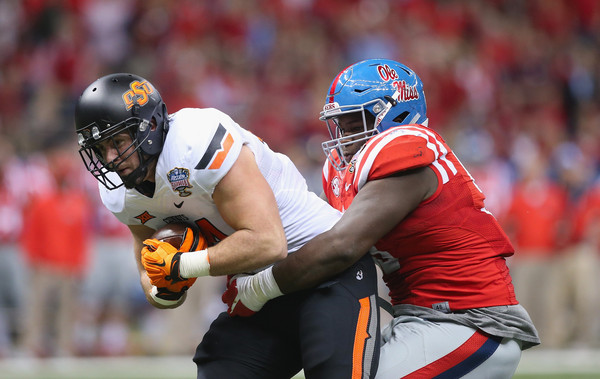 Because of all the college football blowouts over the past few days — in the playoff semifinals on New Year’s Eve, and then in the Rose and Sugar Bowls on New Year’s Day — bloggers and fans both had a lot of time to kill.

Game recaps were pretty much filed at halftime of the Rose and Sugar. Deadlines just weren’t that hard to meet. On New Year’s Night, those of us who weren’t tweeting out fake captions of Stanford Man next to Christian McCaffrey were able to pay attention to college basketball, a sport we’re going to follow a lot more closely from now on.

However, New Year’s Night is not supposed to be reserved for college basketball. Easily meeting deadlines might be all well and good, but the thrill of this business is not found by getting your story in on time.

The best virtue of this season’s New Year’s Six games is that they created a lot more family time. Americans didn’t have to be riveted to a TV set once the first half of a game ended. The Rose and Sugar were legitimately done. Ohio State, Alabama, and Houston exhibited complete control of their respective first halves. Only the Orange Bowl was a total toss-up at the intermission.

Because of all the laughers in the New Year’s Six — especially Stanford-Iowa on New Year’s Day, a holiday — those of us who blog about college football for a living were searching for distractions.

What was the best thing to do during halftime and the second half of the Rose Bowl? Discuss the idea of an eight-team playoff, and whether it’s merited or not. After all, Stanford certainly invited a debate, given that it missed the four-team playoff this season.

At The Student Section, my colleague Bart Doan eagerly embraced the opportunity to revisit the playoff question, specifically through the prism of Stanford. His column is well worth considering.

Where do I come down on the four-versus-eight playoff question? People have asked me that question for many years — every blogger fields that question on an annual basis.

For a long time, I would simply say that I favored the eight-team approach, precisely to include a team such as Stanford (also Ohio State) in the field.

In recent years, though, I’ve tried to answer the question (four or eight?) in a more specific way. That answer is the heart of this particular piece.

Yes, I’m a member of #EightTeamPlayoff. If you flatly asked me to take a side in the four-or-eight debate, I’d go with the larger number.

Why, though? Why stand with eight instead of four? We all owe it to ourselves and each other to explain exactly why one format is better than the other.

Many bloggers who support a four-team playoff (and probably liked the BCS when it existed) hate the reality of “mission creep,” and it’s a valid criticism. Once you expand something, the natural inclination is for expansion to continue to emerge over time: 8 teams, 16 teams, 32 teams, when will it end? (See the NCAA tournament, which almost considered going to 96 teams a few years ago before mercifully stepping away from the ledge.)

I have become more sympathetic to the four-team playoff cause for that reason. Anyone who does support an eight-team playoff has to build in protections and limitations which ensure that the regular season matters.

Moreover, another fundamental concern of an eight-team playoff is that you’re adding an extra game. These players can’t and shouldn’t be subjected to endless games and the physical contact which accompanies it. Playing 16 games (for the two championship game participants) would be part of an eight-team playoff. If we’re not going to start giving athletes the ability to sell their own T-shirts or otherwise profit from sales of their own likenesses, continued expansion of the length of a season becomes (even more of) a problem.

Eight-team playoff advocates have to confront that fact.

What to do, then? How to reconcile the need to confine the length of the season on one hand, yet expand opportunity for teams to make the playoff on the other?

This is the simple solution… but simple in a way you might not have previously considered: shorten the regular season.

A longstanding problem in college football is that only some teams and conferences get certain kinds of opportunities. The conference title game issue — also known as the 13th-game issue — very much fits into that dynamic.

Shortening the regular season from 12 games to 11 (or perhaps just 10) is the way to solve so many problems with college football scheduling and — accordingly — relieve a lot of frustrations about the size and legitimacy of the playoff field.

If you shorten the season to 11 games, one presumption — it’s the linchpin of the whole plan — is that EVERY TEAM would get to play a 12th game. This is the central gateway to reform.

By enabling every team to play the same number of games — in other words, by making it so that the conference championship games do not exist on the island they occupy today — college football can dramatically improve the quality of its non-conference schedule.

Here’s how it would work, using 2015 examples to flesh out the details:

Shortening the season to 11 games but then allowing all teams to play 12th games would enable ESPN (and other networks) to turn that 12th game into a flex-scheduling bonanza. With only 11 regularly-scheduled games, college football would be able to turn its final weekend — when the conference title games are normally played — into a week-long festival of huge made-for-TV games.

The MAC could play all of its season-ending games before Thanksgiving and then play a Thursday night conference title game (Game 12) during the final week of the season. The American, Conference USA, and other Group of Five conferences could also play their league title games on weeknights (they’re used to it, after all) during that first week of December. It would probably help if C-USA and the Mountain West played on Wednesday.

While these moving parts might take time to fall into place for the sake of television, a migration to weeknight slots would facilitate a huge Saturday during this first weekend of December.

Saturday, with the conference championship games being played in prime time, you could have these games in the noon or 3:30 windows:

You’ll notice the heavy Big 12 representation here… because no Big 12 team is tied into a conference championship game. Any team in a conference title game is naturally playing its 12th game in that context. Yet, shortening the season to 11 games but allowing EVERYONE to play a 12th game creates so many avenues for ESPN on that first Saturday of December. The College Football Playoff Selection Committee would receive so many more defining data points as it evaluates teams. Any teams on the fence in a close playoff chase would be able to play high-quality opponents in the final week to either earn their way in or play their way out of the field.

Under THIS format, an eight-team playoff would seem unnecessary… or at least, a lot less necessary than it is now. The shortening of the season with a flexed 12th game for every team is how college football could dramatically improve its regular season without making (unpaid) players play more games.

There’s only one final thing to be said about all this:

The actual solution which might be the best of all? Shorten the regularly-scheduled season to 10 games but allow two games, not one, to be flexed.

Why? Here’s the thing: If you allow two games to be flex-scheduled, not just one, you can create TV-friendly non-conference matchups for everyone, including the teams which play their way into a league championship game.

Iowa, Michigan State, North Carolina, Clemson, Florida, Alabama, Stanford, USC, Houston, Temple — all these teams would play their 12th game against each other in a league title tilt, just as they did this past season. If you limit the set schedule to 10 and flex two games (as opposed to 11 and just one flexed game), all these teams can play an arranged made-for-TV game as their “11th game.”

In a bye week or a soft spot in the schedule in mid-November, these teams could create a Saturday overflowing with huge ratings potential.

The rest of the country would also play flexed 11th games a couple of weeks before the big rivalry games on Thanksgiving weekend, followed by flexed 12th games in early December, for those teams not playing conference championship games.

This is where college football has to reform itself in terms of the scheduling-and-postseason puzzle which constantly baffles the sport.

It’s not really about sticking with four or moving to eight; it’s about making sure more defining games — more legitimate bases for evaluating teams (instead of non-conference cupcake parades such as what North Carolina and Oklahoma State scheduled this season) — are part of the regular season schedule. As long as that piece is included in the mix, you’re not going to get nearly as many complaints or controversies in the decades ahead.

Your move, ESPN. You can do this. There’s a lot of television money to be made. That’s always going to be the reason why college football improves its product, and leaves fewer customers unsatisfied at the end of a season.